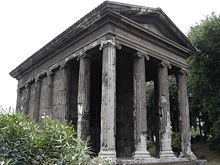 Temple of Portunus in the Forum Boarium

The so-called Temple of Portunus ( Latin aedes portuni ) was probably the port God Portunus sacred temple in Rome . It is also known under the incorrectly used name Temple of Fortuna Virilis since the Renaissance . It stands in the former Forum Boarium right next to a bridge, the Pons Aemilius , and the former city port of Rome, the Portus Tiberinus , where the goods shipped from the Ostia Antica seaport were unloaded. 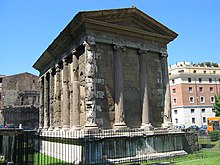 A previous building measuring around 11 × 32 meters, the remains of which were discovered during excavations at the beginning of the 20th century, dates back to the turn of the 4th and 3rd centuries BC. The temple that exists today was built soon after 100 BC. Built in BC. A first restoration took place in the 1st century AD.

The podium temple, designed as a pseudoperipteros , rises on a podium measuring 11.87 × 25.60 meters at the base, and was consequently a little less stretched than its predecessor. The temple was accessible via an outside staircase that was once framed by cheeks . The stylobate building, measuring 10.50 × 19.30 meters, consists of a 5.85 meter deep vestibule comprising two bays , the pronaos , behind which the actual cult room, the cella , opens through a door . The length of the cella including the wall thickness is 11.91 meters. Four 8.22 meter high, Ionic columns form the temple front, with a further column mediating on the long sides to the outer walls of the cella, which are divided by Ionic half-columns : including the corner columns, five on the long sides and four on the rear wall.

Pronaos columns and corner columns of the cella were made of travertine , as were the other column bases and capitals as well as architrave and sima . The shafts of the other half-columns are made of tuff like the cella walls, the frieze and the geison . The podium is filled with Roman concrete, the opus caementicium , and clad with travertine blocks. The whole building was originally covered with stucco . The decorations of this construction phase are lost. The columns and half-columns were later provided with a marble imitation that was still preserved in several places, later stucco decorations with garlands , bucranias , candelabra and erotes can be found on the frieze . During the restoration in the 20th century, concrete and brick were used, which can be clearly seen in some places (e.g. on the south side).

With its pseudoperipteral floor plan, the building differs from most Greek temples , which usually have a gallery of free-standing columns. With the Temple of the Sibyl in Tivoli from the late 2nd century BC. And the Temple of Hercules in Cori from the early 1st century BC. However, there are other representatives of this type of construction in Latium during the late Republican period . In Augustan temple architecture, the building type found more widespread use and is represented in a classic form by the Maison Carrée in Nîmes .

The temple escaped destruction because it was rededicated in 872 as a Christian church. In the 16th century the church was handed over to the Armenian Catholic Church under Pope Pius V and consecrated to St. Mary of Egypt , the patron saint of penitent women and repentant sinners. In 1718, parts of the temple were rebuilt under Clement XI. destroyed, the travertine cladding of the podium was removed to be reused in the church of Santa Maria in Cosmedin . The church was abandoned in 1916 to restore the ancient temple. The high mediaeval frescoes telling the story of the saints can still be seen inside the building.