This article deals with the Scottish garment, for the music group see The Trews . 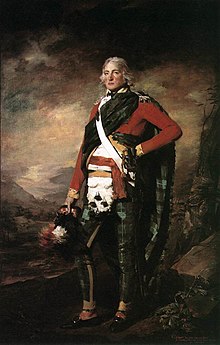 Trews (also: Scottish Gaelic Truis , triubhas ) are a men's garment for the legs and lower abdomen, a traditional form of tartan - pants of Scottish Highland dress . Trews can be reinforced with leather. Suede is usually used, especially on the inside of the legs to reduce wear and tear when riding.

Tartan Trews shared the lot of all other elements of the Highland Dress, including a proscription by the Dress Act of 1746, which prohibited men and boys from wearing the "truis" outside of military service. The Dress Act was not introduced until 1782 under the reign of King George III. canceled.

The tartan truis (trousers) can be traced back to 1538. Even then there were tartan trousers woven in medieval style, which were worn in the Highlands, especially in winter, when the kilts did not offer sufficient protection. The Gaelic name is triubhas , anglicized forms are "truis", "trowse" or "trews". The meaning is like in English trousers. 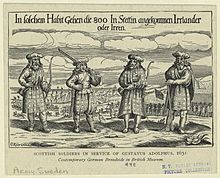 Scottish mercenaries in the 17th century with early types of “trews”, or tartan trousers and breeches .

Traditionally, trews were tight-fitting garments, comparable to the “trousers” with feet of the Renaissance . The origin may also be there. However, the Roman writer Tacitus relates as early as 69 BC that the Roman general Caecina was seen as haughty for wearing foreign trousers when he met with toga- clad senators . Trews were available as knee-breeches (knee-length) or full-length.

Usually, the fabric for the Trews was cut in an oblique cut (cross-grain / bias), so that the fabric stretched better and conformed to the body, while the tartan "sett" stood diagonally.

The long “trousers” went over the hips and were connected with a linen fabric . They were fastened below the knee with garters (the forerunners of the "flashes" in the Highland Dress). David Morier immortalized this style in his picture of the Battle of Culloden . Scottish folklore says that in the 16th to 18th centuries these triubhas were the most common clothing in the Highlands . It should be mentioned that the Highland Scots wore shorter trousers that only came down to the knee when they traveled, and that they tied their "bed-garments" around their hips and thus a form of the Great Kilt (Belted Plaid) justified.

The Seann Triubhas dance involves performing a series of sideways kicks. It is sometimes claimed that this movement represents the rejection ("kicking away") of the Trews in favor of the kilt. DG MacLennan writes in Traditional Highland and Scottish Dances , however, that he invented this dance figure himself and that this has nothing to do with a rejection of the pants. Trews are fully compliant for dance competitions.

Modern Trews are cut more like ordinary pants with the fabric in a parallel cut, but without a side hem . They are often high-waisted and are usually a short jacket ( jacket worn), an alternative to the kilt.

Until the founding of the Royal Regiment of Scotland in 2006, Military Trews were commonly worn by soldiers from the Scottish Lowlands regiments as part of their No 1, mess and full dress uniform . Members of the Scottish Highland regiments were typically instructed to wear kilts on appropriate occasions. However, all Highland regiments have also recently been wearing trews on less formal occasions than barracks and training dress . They were also part of the uniform of the composite regiments of The Highlanders (Seaforth, Gordons and Camerons) (1994). The new Royal Regiment of Scotland includes all previous Scottish infantry platoons and allows trews for specific occasions.

Meanwhile, the Highland regiments, which were formed from 1739 on, insisted on keeping their national costumes and the Great Highland War Pipes , albeit in a modified form adapted to the British military identity. At first they wore the complicated belted plaid and later, to encourage recruits who were not familiar with such garments, they adopted the simpler kilt. However, from the late 18th century onwards, trews were increasingly worn as off-duty clothing and even as combat suits. Highland regiments deployed in hot or unhealthy areas often used plain white cotton trousers or tartan trews. For example, the 91st Highland Regiment of Foot Trews used during the Walcheren campaign in 1809 and the 93rd Highland Regiment of Foot carried Trews round, unsprung Highland bonnets during the War of 1812 (1812-1815) against the United States , during the British campaign against New Orleans in January 1815 and during the disastrous Battle of Chalmette Plain (with the war reporting lithographs falsely depicting Scots in kilts).

In 1822, after King George IV's successful first visit to Scotland, he ordered the reintroduction of highland dress and traditions for a de-kilted regiment (which had previously been banned from wearing kilts). The regiment chosen was the oldest of these regiments, the 72nd. The Highland Feather Bonnet and the Highland version of the red coatee (uniform jacket) were adopted, but instead of the kilt, trews were introduced for all occasions. The chosen tartan was a new form of the red Royal Stewart tartan , the so-called Prince Charles Edward Stuart , which shows the new romantic attitude towards everything that is Jacobite .

Tartan Plus-Fours are traditional golf trousers that are modeled on the Trews. These types of pants go 4  inches below the knee and are often worn with Argyle knee socks. Plus-fours became popular in the United States through a visit by Edward VIII (Prince of Wales) in 1924. The full-length tartan trousers worn by many golfers are also modeled after the Trews, but cut wider, to enable better freedom of movement and to offer more comfort in warmer climates.