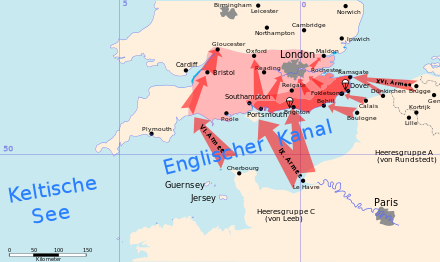 The company Seelöwe was the invasion of Great Britain prepared by the Wehrmacht during World War II , but not realized .

A landing in England appears as a possibility in the written documents of the Wehrmacht staff in early August 1939, about a month before Great Britain declared war on Germany in response to the German invasion of Poland (September 3, 1939). In a “Study for the Air War against England” by the Luftwaffe on August 7, 1939, the last item on the list “Objectives of Air Warfare against England in the Final Solution” was noted: “6. The threat of an invasion and its implementation as part of major continental operations by the entire Wehrmacht in order to break the enemy's last resistance by occupying large parts of the country. "

After the Wehrmacht High Command had decided on November 14, 1939 to include southern Holland in the planned western campaign - which meant that the mouths of the Rhine with their cheap possibilities for collecting and equipping a landing fleet and their closer proximity to England than the German Bight , would definitely fall into German hands - on November 15, 1939 , the Commander-in-Chief of the Navy , Erich Raeder , ordered a “review of the possibility of an invasion of England under certain conditions of further development of the war”. In other words, the Navy had already given appropriate considerations beforehand.

This "review" identified the multiple difficulties a landing fleet had in invading England, the main obstacles being the Royal Navy , the British fleet, at the time the most powerful fleet in the world, and the Royal Air Force , the British Air Force. The study concluded that the conquest of the Royal Navy and the Royal Air Force would "most likely simultaneously result in the total collapse of this country's will to resist, so that a landing and occupation ... is hardly necessary".

In spite of this, the study stated: "A large-scale landing operation across the North Sea under the aforementioned conditions is a possible means of forcing the enemy to be ready for peace".

In early December 1939, the army began planning an invasion of England. On December 6, 1939, Franz Halder , the Army Chief of Staff, requested maps of England. On December 13th there was a draft of the Army , which was sent to the Navy and the Air Force , for their views on this rough draft for a landing on the southern North Sea coast of England ( East Anglia ) from the German Bight. It states that the Commander-in-Chief of the Army, Walther von Brauchitsch , “ordered the investigation of the possibility of a landing in England. The result is to be recorded in a study 'Northwest'. "

The Navy and the Air Force replied to the Army on December 30, 1939 that the Royal Navy had to be switched off first, which is currently not possible, and that due to the limited range of the Air Force aircraft, air support for a landing in England from Germany would be provided is not possible.

With the successful course of the western campaign in May 1940, the Navy began planning an invasion of England again. On May 27, a new study was available, which also referred to the study Northwest of the Army of December 1939, and now included all ports from the French Channel coast to Denmark , which was occupied in April 1940, as the basis for an invasion fleet. On May 31, the Navy began work on building a landing fleet. For this purpose, all ships that were usable for a landing in England were recorded in the next few weeks . Serious preparations for an invasion of England had now begun. By June 7th, a study had been carried out showing the navigational conditions in British coastal waters, the state of each English port in the possible landing area and the coastal stretches for landing opportunities on the open coast.

With the military collapse of France in June 1940 and the following armistice , which came into force on June 25, 1940, a decision had to be made about the further course of the war with Great Britain as Germany's only remaining opponent.

The army also began planning an invasion of England again at the beginning of June, and various conferences on a landing in England were held at the command levels of the Wehrmacht. On July 13, 1940, Halder, as Chief of Staff of the Army, gave a lecture to Adolf Hitler on the Army's preliminary considerations for a landing in England in the presence of the Army Commander-in-Chief, von Brauchitsch . After the lecture he ordered the two generals to begin immediately with the practical preparations for the invasion of England.

On July 16, 1940, Hitler issued "Instruction No. 16 on the preparation of a landing operation against England". It says:

"Since England, in spite of its militarily hopeless situation, is not yet showing any signs of willingness to come to an understanding, I have decided to prepare and, if necessary, carry out a landing operation against England."

The German army wanted to land in as many places as possible and attack Great Britain on a broad front.

The Navy, however, only wanted to land on a narrow corridor in the Strait of Dover , since it was too weak to protect several landing operations against the superior Royal Navy, even with total air superiority . According to the navy's plans, the corridor was to be protected on the left and right by mine barriers and forward submarines.

Thereupon Hitler intervened and decided the following plan, which did not satisfy neither the navy nor the army:

On July 25, the Navy calculated the need for sea ​​vessels :

A reserve of 10% was included in these figures for losses of all kinds (enemy action, accidents).

The Navy reported mid-August as the earliest landing date on July 22nd, but only under the condition of air supremacy . According to the OKW's war diary of August 1, 1940, the High Command of the Navy reported that the mine-laying and mine-clearing operations could not be finished before September 13. The preparations for the landing in England were finally not completed until mid-September 1940, mainly because of the time-consuming conversion of around 2000 barges into landing craft .

To deceive the British defense, a mock landing was prepared in the north of Great Britain ( Operation Autumn Journey ).

Hitler showed little enthusiasm for a landing in England, which can already be seen in the wording in directive No. 16 to only “carry out a landing if necessary”, and Raeder, as chief of the navy, repeatedly explained the difficulties of a landing to him. Apparently Hitler preferred a "willingness to come to an understanding" from England. On July 19, during a speech in Berlin, he made an offer of peace to England, which the government in London refused to accept. Hitler reacted to this on August 2, 1940 with "Directive No. 17 for the conduct of the air and sea war against England".

Instead of concentrating all preparations on the invasion of England, Hitler tried with Directive No. 17 both to support the planned landing operation in advance by demanding "to defeat the British Air Force as soon as possible" and to wage a pure economic war. So the "air armament industry" and the "food supply" of England should be attacked and even the fight against enemy warships should be withdrawn from the air, as it says in the instruction - an order which exactly contradicts the preparation of the landing in England. In the last point of Directive No. 17, Hitler stated: "I reserve the right to terrorist attacks in retaliation". These air strikes quickly developed into mere bombing of cities without any connection with the Sea Lion Company. The attacks brought heavy losses to the Luftwaffe and Hitler's hope was not fulfilled that the bombing of cities - especially London - would break the morale of the English people and government in order to prepare them for peace. The Air Command could not be won. This senseless air war in terms of the planned landing in England went down in history as the air battle for England .

Erich Raeder , the Commander-in-Chief of the Navy, wrote in his memoirs: “The conversion of the Luftwaffe attacks had been approved by Hitler. It was evident that, like Goering, he was hoping that the attacks on London would bring success without running the risk of an invasion. I thought it hopeless to dissuade him from this attitude. I should then have advised him to carry out the "Sea Lion" operation instead, the success of which I doubted from the outset ... "

The Italians in Libya were asked to begin the Italian invasion of Egypt around August 10th in order to bind British troops there in the event of the invasion of England.

In his memoirs, Raeder wrote of a conversation with Hitler on August 13th: “I pointed out again that the operation“ Sea Lion ”could only be considered as a last resort if England could not be prepared for peace in any other way. Hitler agreed with my view, but wanted to speak to the Commander-in-Chief of the Army again. "

As a last attempt to come to peace with England without invading the country, Hitler began secret negotiations with England in early September 1940, which he conducted through intermediaries in Sweden . They ended on September 19, 1940 in a secret official statement by the British government with conditions unacceptable to Hitler, including: a. the evacuation of the countries occupied by Germany.

At that time, a study commissioned by the War Cabinet of Great Britain's military political leadership, chaired by Prime Minister Winston Churchill, concluded that the Royal Navy, as the decisive weapon against a German invasion, would not be able to prevent the conquest of England by the Wehrmacht.

It was precisely at this time of the secret negotiations with England that the final decision was made as to whether the Sea Lion operation would be carried out or not. In mid-September 1940 Hitler should have given the order to carry it out, because several days would pass from the order to the execution due to all the necessary preparatory measures and the best operational weather would prevail around September 20-25 due to the moonlit nights. Later both the weather conditions with the onset of autumn weather and the ever shorter days and dark nights would make a landing operation more and more difficult. However, Hitler did not give the order to land in England and on October 15, 1940 postponed Operation Sea Lion to spring 1941.

Hermann Göring , Commander in Chief of the Air Force, said on September 2, 1940, to General der Flieger Kurt Student , who commanded the airborne troops that were to land in England with parachutes and gliders in the first wave and later with transport planes at Operation Sea Lion : " The Fuehrer doesn't want to go to England at all, student! ”Student:“ And why not? ”In response, Goering shrugged his shoulders.

On December 18, 1940, Hitler gave the order to prepare for the attack on the Soviet Union with directive No. 21 . These preparations were to be completed by May 15, 1941, so that the attack could then be launched. This also ruled out an invasion of England in 1941, although preparations for the landing in England continued, even though since October 15, 1940, more and more troops and material were withdrawn from Company Sea Lion for other tasks.

On December 14, 1941, the Wehrmacht High Command ordered the construction of the Atlantic Wall , which was supposed to prevent an invasion by the British and Americans in Western and Northern Europe.

Operation Sea Lion was never finally given up. The last order for the officially planned landing in England was given by the Navy on February 5, 1944: "The production facilities (and only those for the preparations for sea lions are to be shut down for the time being." 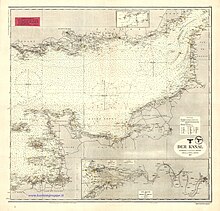