A proportional representation (in Switzerland also proportional representation , short proportional representation called) is a choice under a voting system in which the nomination carrier (usually political parties ) Groups set of candidates, mostly as a minor electoral lists . It is therefore a list choice . The voters then choose primarily or exclusively between these lists. In some countries, such as Switzerland, this rule is weakened by open or loosely bound lists or the possibility of cumulation and variegation . The seats are allocated as precisely as possible in the same ratio as was voted (hence the name ratio choice). As a rule, groups get fewer seats than they put up candidates. Then the seats are usually filled with candidates from the top of the list.

In many proportional representation systems, in addition to the inherent first seat threshold, there is a minimum requirement that a group must meet in order to be considered. If a list does not meet the requirements defined in the threshold clause , it will not receive any seats.

The procedure in a proportional representation system can be illustrated by the following example: A group that received 30% of the votes also gets as precisely as possible 30% of the seats. Since the number of seats calculated in this way are usually not whole numbers, a seat allocation procedure to be used is determined before the election .

Tending advantages and disadvantages of the proportional representation system

Advantages of the proportional representation system

Disadvantages of the proportional representation system

The following point is not adequately provided with evidence ( e.g. individual evidence ). Information without sufficient evidence could be removed soon. Please help Wikipedia by researching the information and including good evidence.

Proportional representation systems of some countries 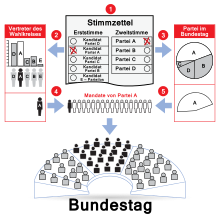 Personalized proportional representation in elections to the Bundestag

In most of the German states (except North Rhine-Westphalia, Saarland, Berlin and partly Schleswig-Holstein), proportional representation at the local level is achieved through cumulation (each voter has several votes and can give individual applicants more than one vote), variegation (voters can not only tick lists, but also give individual votes to applicants from other lists) and strike (voters can strike applicants from the list they tick) relaxed.

In Greece , the Greek Parliament is filled as a 300-seat chamber every four years. 288 members of parliament are elected in 56 constituencies and 12 members are elected from national party lists.

Until 1994, a system of proportional representation was used in Italy for elections, which in fact provided no percentage hurdles and thus significantly prevented large coalitions in the Italian party landscape, which led to frequent changes of government.

After a referendum, a four percent hurdle (threshold clause) was introduced in the elections to the House of Representatives in 1994 , and now only 25 percent of the seats were allocated according to proportional representation, the remaining 75 percent according to majority voting.

The electoral law was changed again by the Electoral Law Reform Act 270/2005 . After the approval of the Camera dei deputati , the Senato della Repubblica decided on December 14, 2005 with 160: 119 votes to (re) introduce a (modified) proportional representation. The new electoral law was announced by President Ciampi on December 22, 2005 and was already applied for the parliamentary elections in April 2006. The law provides for a "bonus" for the election winner in order to secure clear majorities in parliament (majority proportional representation system), i. H. the majority coalition is guaranteed to reach 340 seats in the Chamber of Deputies. There are also threshold clauses for small parties. There are three hurdles for the House of Representatives: 10% for list links , 4% for unrelated parties, and 2% for parties in list links. An exception applies to parties representing recognized minorities . In 2017, the electoral law was changed again, it now provides for a 3% threshold and is a mixture of proportional (5/8) and majority (3/8) ( trench voting system ). On March 4, 2018 , both the Chamber of Deputies and the Senate were elected for the first time according to this model.

There is also a threshold clause in Israel that stood at 2% until the 2013 election . This low hurdle resulted in a greater distribution of power in the Knesset . So far, at least nine different, very heterogeneous parties have always been represented in parliament. On March 11, 2014, the Knesset raised the threshold to 3.25%. The mandates are distributed according to the maximum number method according to d'Hondt .

In elections to the National Council , the four percent hurdle or the achievement of a basic mandate applies .

Proportional voting determines how many votes go to a party. These so-called party votes are made up of the candidate votes and the additional votes . All votes cast for candidates of the respective party count as candidate votes. If the ballot paper bears a party name, all empty or crossed out votes for the party also count. Such votes are known as additional votes. If the ballot paper bears no party name, blank or crossed-out votes are lost. Votes are settled in Switzerland according to the Hagenbach-Bischoff procedure , and more recently also according to the so-called double Pukelsheim . Several cantons ( AG , SO , ZG ) knew (in some cases up to the turn of the last century), in deviation from the otherwise usual candidate vote proportionality, a list vote proportionality, in which only the number of votes cast for a party list was decisive for the distribution of mandates.

Voters must use pre-printed ballot papers, but they can choose between pre-printed party lists and blank ballot papers. Both can be changed by hand. In Switzerland, voters have the following options:

Changes and additions to ballot papers must be made by hand. All changes must be unique; H. the candidate must be identified precisely with their surname and first name and, if available, with the candidate number, if there is a risk of confusion, possibly even with their profession and address, etc. A maximum of as many candidates as there are seats to be allocated may be listed. Excess names are deleted from below.

Only votes for candidates who are on one of the preprinted ballot papers are valid - they are usually numbered (e.g. 4.2 for 2nd person from list 4). Votes for other people are not counted. Ballot papers that can be identified, be it by signature or other markings, are invalid because they violate voting secrecy. Ballot papers that contain defamatory statements (e.g. a disparaging designation is added to the name), do not have at least one valid candidate name or have been mechanically changed (e.g. with a typewriter) are also invalid.