from Wikipedia, the free encyclopedia
This is the spotted version , flagged on November 23, 2018 . There is 1 pending change that has yet to be viewed.

The Weilerburg (historically: Rotenburg) is a medieval castle ruin in the Rottenburg district of Weiler in the Tübingen district in Baden-Württemberg .

The ruins of the hilltop castle are located above the former hamlet of Burgweiler at 555  m above sea level. NN high Rotenberg, which is also called Burgberg, a witness mountain on a northeastern branch of the Rammerts .

The hill fort was first mentioned in a document in 1225. In it, the son of a Count Burkhard von Zollern with the name "Albertus, dominus de Rotinburc", as Lord von Rotenburg, settles a dispute between the Kreuzlingen monastery and the heir of a farm in Neckargau. This Albert seals the certificate with the seal of his deceased brother, Count Burkhard von Hohenberg.

It is likely that the castle complex was built earlier. As early as the middle of the 12th century, an "Adelbertus de Rotenburg" with his son Konrad was named, who made donations to the Hirsau monastery in Validstein . The view that these Rotenburgers could be ancestors of the von Zollern-Hohenberg family is now considered controversial. Instead, it is assumed that they come from a possible subsidiary branch of the Counts of Dillingen . These free lords of Rotenburg are currently considered to be the builders of the castle.

In the 13th century at the latest, the castle was owned by the Counts of Hohenberg . The ancestral mother of the Habsburg dynasty , Gertrud von Hohenberg (* around 1225, † February 16, 1281), who later became Queen Anna of Habsburg, is said to have spent her childhood and youth at the castle. Her brother, the Reichslandvogt and minstrel Count Albrecht II of Hohenberg (* around 1230; † 1298), who is also called Count von Rotenburg in some documents, is said to have sat at the castle for a time. After the Hohenbergers built a Hofburg in the city of Rottenburg, which they rebuilt around 1280, or expanded a castle that might already exist there, the "old Rotenburg" lost its function and was probably only used for residential purposes.

Minstrel gate of the hamlet castle

In 1381 the Hohenbergers also sold the Rotenburg to the Habsburgs. In 1407, according to a story by Nicodemus Frischlin , she is said to have been during a raid by the gray Count Friedrich XII. von Zollern , called Oettinger, destroyed and then only partially rebuilt. In the 15th and 16th centuries it was used as an inn and as an excursion destination for hunts and fell into disrepair.

In 1624 the castle was torn down to its foundations, the castle stones were used at the behest of the Austrian bailiff for the construction of the Capuchin monastery in Ehingen (Rottenburg).

In 1873/74, the 24 m high observation tower and the castle gate were rebuilt as a “victory and minstrel monument” on the initiative of the Sülchgauer Altertumsverein.

The town of Rottenburg am Neckar has owned the ruin since 1974. 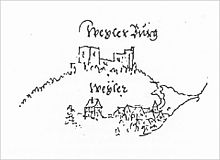 The hamlet castle in a pen drawing from 1572

The ruin of the Weilerburg is a popular excursion destination in the region that is open all year round with a barbecue area and drinks. It is looked after and entertained by the German Alpine Association , Rottenburg section. When the flag, which can be seen from afar, is hoisted, the bar is also open.

From the observation tower you have a wide panoramic view over the center of the south-west German layer level country . From here you also have a good view of the Albtrauf , the steep drop of the Swabian Alb .