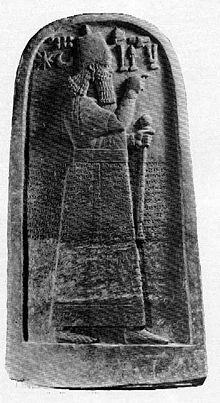 Stela of a king named Adad-nirari, presumably. of the first husband Iraqi National Museum, missing since the 2nd Gulf War.

Adad-nirari I. (Adad-nārārī I.), son of Ārik-dēn-ili , was a Middle Assyrian king of the 5th dynasty. According to the Assyrian royal list , he ruled for 32 years. A relatively large number of inscriptions have survived from his reign. It is valued differently:

Adad-nārārī was the great-grandson of Ashur-uballit I. After Ḫorsabad list and the SDAS list was he of his predecessor Arik-den-ili, but what Poebel thinks is a mistake, the brother in the Nassouhi list is he his son.

Adad-nārārī called himself “Holy Ruler”, “Supreme Judge”, “Appropriate to the gods”, “Governor of the gods”, “Supreme priest of the god Enlil ”, “Ruler to the An , Aššur , Šamaš , Adad and Išate all rulers Throwing at your feet ”,“ Extender of the borders ”,“ Viceroy of Aššur ”. For the first time, a militaristic trait can be recognized in the royal title, which replaces or at least pushes back the emphasis on the favor of the gods under the previous kings. Even when he mentions his ancestors such as Enlil-nārāri and his great-grandfather Aššur-uballiṭ I , their military successes are in the foreground. On a stele from Aššur , Adad-nārārī calls himself king of the world, strong king, king of Assyria .

He also defeated the “hordes” of the nomadic Ahlamu , the Șutu , who had made themselves unpopular under Aššur-uballit I by interrupting diplomatic relations with Egypt , and the Jauru.

Adad-nārārī made Hanigalbat temporarily an Assyrian vassal state. He managed to capture Šattuara , the king of Hanilgabat , and bring him to Aššur. Against the promise of annual tribute payments, he was released again. After the death of Šattuara, his son Wašašatta became a Hittite vassal. The Hittites did not come to the aid of Wašašatta when Adad-nārārī attacked. He prides himself on having captured the royal capital Taidu and the cities of Amasaku, Kahat, Šuru, Nabula, Hurra, Šuduhu and Waššukanni and having brought the royal treasure to Aššur. Taidu was burned and sprinkled with salt (literally: " sown with kudimmus "), and Irridi was also destroyed. In Irridu, a woman from Wašašatta, his sons and daughters were captured and brought to Aššur. However, Wašašatta itself could not be captured. He may have established himself in Turiru , east or north of Karkemis, from where he attacked both Hethither (KBo I 14) and Assyrians. Adad-nārārīs territory now extended from Mount Kašiari ( Tur Abdin ) and the city of Sudu , the fortress of Ḫarranu to Karkemiš on the Euphrates , from where he had a view of the Amanus . Güterbock considers it unlikely that Adad-nārārī was enthusiastic about the beauty of the view and considers this formulation to be the threat of an attack on Hittite territory. Adad-nārārī used the people of Hanigalbat for forced labor. It is difficult to judge how comprehensive the prostration of Hanilgabat really was. Tūrira remained independent, and Shalmanasser fought again against a coalition of Mitanni under Šattuara II. , The Aḫlamu nomads and the Hittiths. According to Hittite texts, Mitanni continued to exist, even if many authors consider this a "political fiction".

Adad-nārārī also fought with the Babylonian Kassites under their king Nazi-Maruttaš , whom he defeated in Kar-Ištar of Akarsallu / Urgār-Sallu east of the Tigris and south of the Little Zab . He captured his standard and his camp. The event, even if probably not the corresponding outcome, seems to have been mentioned in Chronicle P , unfortunately it is very poorly preserved at this point. Adad-nārārī signed a contract with the Babylonian ruler Nazi-Maruttaš or Kadašman-Turgu , which is only preserved in fragments. He describes the new demarcation that ran from Pilasqi on the eastern bank of the Tigris through Arman von Akarsallu to the mountains of Lullube in western Zagros . On the Euphrates, Rapiqu was the most northwestern Babylonian garrison.

Correspondence with the Hittite kings has come down to us from the time of Adad-nārārī . Adad-nārārī had apparently informed the Hittite great king Urḫi-Teššup about his successes in Ḫanilgabat and described himself as the great king and brother of the king of Hatti. The Great King had this designation sharply rejected in a draft letter (KUB XXIII 102). “Does one of those who are not friends usually write to the other about brotherhood? ... You and I, were we born of a mother? " The great king points out that his father and grandfather did not consider Aššur to be equal either (line 17). He concludes with the words “Stop writing to me about brotherhood and that you are a great king. It is not [my] will! "

However, one of Urḫi-Teššup's predecessors, perhaps Muwatalli II , seems to have sent gifts to Adad-nārārī on the occasion of his accession to the throne (KBo I 14, RS 5). Hattušili III. refers to this king as his father or brother ( a-bi / a-ḫi ), a term that he never uses for his nephew Urḫi-Teššsup. Another letter with no sender or addressee (KBo I 14) mentions "grief", which afflicted the envoy of the letter partner under Urḫi-Teššup. Harrak and Hagenbuchner suspect Adad-nārārī as the recipient. This would lead to the conclusion that Urḫi-Teššup had appointed messengers from the Assyrian king and was therefore still not interested in friendly relations with Aššur.

Adad-nārārī also failed to give the usurper Hattušili III. to send gifts on the occasion of his accession to the throne. The great king lets him know that it is custom among kings to send appropriate gifts ( šulmānātu damqātu ), such as royal robes and fine anointing oil , to each other on accession to the throne . The letter suggests that Hattušili III, presumably due to his insecure position, is ready to recognize the Assyrian as an equal king and to enter into an exchange with him, provided that he adheres to diplomatic customs ( parṣu ) and his benevolence with more generous ones Gifts bought.

Adad-nārārī ruled at the same time as Ramses II , this synchronism is an important pillar of the Middle Babylonian chronology. Rowson sets his death between the 23rd and 37th year of Ramses' reign.

In Aššur , Adad-nārārī rebuilt the step gate from the foundations and equipped it with limestone slabs from Ubase . He also built a bank fortification on the Tigris from the Wa-šarru Gate to the Tigris Gate in the lower town and reinforced it with burnt bricks and limestone slabs. He also appears to have built another bank fortification (Grayson 436), as well as renewing part of the fortification of the inner city, opposite the ziggurat of Assur and the warehouses at the gate of An and Adad . He also rebuilt the temple of Ištar , which went back to Ilu-šuma .

According to an inscription from Assur, he built a palace in the ruins of Taidu and furnished it with steles. However, it is not certain that the work described ever took place. The corresponding inscription ignores the systematic destruction of the city described in another inscription.