Aelbert Jacobsz. Cuyp (* in Dordrecht , baptized at the end of October 1620 ; † there, buried November 15, 1691 ) was one of the most important Dutch landscape painters of the 17th century.

Aelbert was the only son of the painter Jacob Gerritsz. Cuyp (1594–1652) and became the best-known representative of the Cuyp family of painters in Dordrecht, which also included Jacobs' half-brother, Benjamin Gerritsz. Cuyp (1612-1652) belonged. Aelbert was certainly taught by his father, nothing is known of an apprenticeship with a foreign teacher and entry into a local painters' guild. Initially, Aelbert worked on his father's paintings, mainly painting the landscape backgrounds in some family portraits. Around 1642 he made his first major journey through Holland and along the Rhine . His second journey in 1652 took him again along the Rhine and Waal to Rhenen and Nijmegen (German: Nijmegen ), from there on to Kleve , Elten and Emmerich . On both trips he made numerous drawings that later formed the basis of many of his landscape paintings. The Albert Cuyp Straat and the Albert Cuyp Market in Amsterdam are named after him.

Aelbert's early landscapes are clearly under the influence of Jan van Goyen , Salomon van Ruysdael and Herman Saftleven II, even if he made his light rendering a little brighter and more contrasting and with the depiction of cattle, shepherds and fishermen set stronger figurative accents. He was probably in personal contact with van Goyen during his repeated visits to Dordrecht.

Around 1645, the hitherto rather subdued atmosphere of his landscape depictions changed to pictures drenched in the sun, whose stronger light also produced stronger colors. The influence of Jan Both, who returned to Utrecht from Italy in 1641 and now cultivated a Mediterranean-style landscape art, also determined by Claude Lorrain , was decisive for this change . Aelbert could have met Jan Both personally on his first trip to Holland, which also took him to Utrecht. However, he rarely used typical Italian motifs such as ruins or rocky landscapes. Rather, he immersed local river landscapes in the golden, southern light of a late afternoon or evening hour and achieved a harmony in which the representational form appears to be determined by the light and the atmosphere, but is able to assert itself vigorously in contrast to earlier form-dissolving tendencies. With this style, Aelbert Cuyp reached a high point in the development of Dutch landscape painting.

In addition to the typical depictions of cows with shepherds dominating the scene or various still lifes , Aelbert's later works include numerous equestrian scenes, often on Dutch river landscapes, but also some equestrian portraits, such as that of Pieter de Roovere (c. 1652, The Hague , Mauritshuis ) or by Michiel and Cornelis Pompe van Meerdervoort with their riding instructor and coachman (c. 1652-3, New York , Metropolitan Museum ). Aelbert's best-known pictures include the depictions of his hometown Dordrecht from different angles as well as the different views of the city of Nijmegen, especially the medieval citadel Valkhof, which at that time was the presumable seat of Claudius Civilis, the leader of the Batavian revolt against the Roman Supremacy in AD 69, great popularity through patriotic associations among the population of the young, independent Dutch Republic.

Through Aelbert's marriage in 1658 to Cornelia Boschman, the widow of the regent Johan van den Corput, he achieved prosperity and rapidly growing social importance, combined with holding numerous honorary positions, such as deacon (1660) and elder (1672) of the Reformed Church in Dordrecht up to a member of the High Court of Justice of South Holland (1679). However, the exercise of these offices gradually brought his painting activities to a standstill.

Aelbert Cuyp was almost unknown outside of Dordrecht throughout his life. His painting style was initially continued by the brothers Abraham (1642–1722) and Barent van Calraet (1650–1737) - often in such a close association that, also because of the same signature AC, some works by Abraham van Calraet were erroneously ascribed to Aelbert Cuyp. Both brothers must in any case have been well acquainted with Aelbert, and it is believed that one of them was also his pupil. Although some paintings attributed to Cuyp appeared at auctions in the Netherlands and London around 1750, his work received little attention until the end of the 18th century. However, this changed suddenly when Aelbert Cuyp was named in a sales catalog from 1774 as being equal to Claude Lorrain . From then on, his or his ascribed works often appeared in auction catalogs and fetched high prices. Numerous imitations and copies of his pictures were made. Cuyp was particularly valued in England, especially by his painter colleagues William Turner and John Constable , who took some of his pictures. Cuyp's works can still be found predominantly in English collections, while they are only rarely represented in Dutch museums. 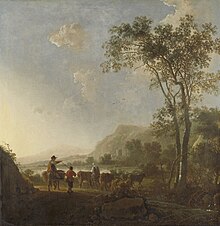