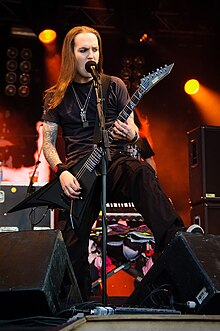 Alexi Laiho at the Ilosaarirock 2009 Festival

Alexi "Wildchild" Laiho (actually: Markku Uula Aleksi Laiho; born April 8, 1979 in Espoo , Finland ) is a Finnish musician. He was the guitarist , singer and main songwriter of the band Children of Bodom , until their dissolution in 2019, as well as guitarist and main songwriter for Sinergy and guitarist for Kylähullut .

As a child, Alexi Laiho played the violin for five years , then the piano . According to his own statement, he always changed the instrument before he really mastered it. He got to know heavy metal through his sister and the band WASP , whose song "Wild Child", according to him, described his wild nature, which is why he chose this title as a nickname.

He started playing the electric guitar at the age of eleven. His playing is heavily influenced by his role models Randy Rhoads , Zakk Wylde and, above all, Yngwie Malmsteen . Laiho dropped out of school at the age of 16 to concentrate on his band and guitar playing.

In 1993 Alexi Laiho founded the death metal band Inearthed with his friend Jaska W. Raatikainen , with whom they recorded three demos. Shortly thereafter, Laiho joined the Finnish metal band Thy Serpent , but still focused on Inearthed, which is why he attended the Thy Serpent rehearsals rather sporadically. Because Inearthed had signed a record deal, but shortly afterwards a more lucrative deal was promised, they broke up and formed Children of Bodom with the same line-up in order to be able to change labels.

After the recording of the first Children of Bodom album Something Wild , Laiho Thy Serpent left again. At a concert in Moscow he decided to join Impaled Nazarene as lead guitarist. Since Children of Bodom had priority, he could not take part in all Impaled Nazarene concerts. For the 2000 album Nihil , he wrote the music for the songs "Cogito Ergo Sum" and "Zero Tolerance" (Impaled Nazarene were heavily criticized for the latter due to the extremely homophobic lyrics).

Alexi Laiho also joined the band Sinergy, with whose singer Kimberly Goss he was married from 2002 to 2004. In 1998 they recorded their debut album Beware The Heavens . In 2001 he left Impaled Nazarene for lack of time.

In 2004 he founded the Finnish punk rock band Kylähullut. In 2019 he played guest guitar solos on Death Angel's Humanicide for Ghost of Me .