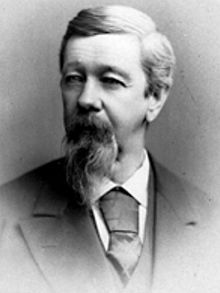 Alfred Sully (born May 22, 1821 in Philadelphia , Pennsylvania , † April 27, 1879 in Vancouver , Washington ) was an officer in the US Army . His highest rank was that of a Brevet - Major General of Volunteers during the Civil War , the regular army he became colonel .

He was born the son of the painter Thomas Sully . Alfred Sully attended the Military Academy at West Point , New York . He successfully completed it in 1841.

Career up to the Civil War

As a lieutenant he was transferred to Fort Russell, Florida , and took part in the Seminole War. From 1842 to 1846 he was stationed in Sackett's Harbor , New York . Sully took part in the American-Mexican War , including the siege of Veracruz , and was promoted to first lieutenant in 1847 . In 1848 he was transferred to Monterey , California and later to Benicia , California. He was promoted to captain and named supply officer, during which time he participated in campaigns against Indians in northern California and southern Oregon . He married in 1850, but his wife died in childbirth the following year. From 1854 to 1861 Sully operated in the northern prairie areas against the northern Cheyenne and Dakota in the area of ​​what is now the states of Nebraska , North and South Dakota .

In 1861 Sully was transferred to Fort Leavenworth and tasked with raising troops for the Union and driving the Confederates out of St. Joseph and Independence , Missouri . In 1862 Sully took part in the Peninsula Campaign as commander of the 1st Minnesota Infantry Regiment and in the Battle of Antietam . He rose to colonel and finally to brigadier general . His association was made up of Confederate prisoners.

In 1863 he was commanded back to the prairie under General John Pope at the head of the 1st Minnesota Infantry Regiment. He led the operations in North Dakota that were directed against the Arapaho , Cheyenne and Sioux. He was in command of the fighting at Whitestone Hill on September 3, 1863 and the Army units involved in Killdeer Mountain on July 28, 1864. He eventually also took part in the peace negotiations with the tribes. In 1865 Sully was certified major general.

After the Civil War

In 1866 Sully retired from the volunteer army and was promoted to Brevet Brigadier General and Lieutenant Colonel in the regular army. In the same year he married a second time. Sully investigated the Fetterman Skirmish for the army and brokered peace with the Indian tribes in Powder River County . In 1869 he became superintendent for Indian affairs in Montana . In 1873 he was promoted to colonel.