Alpha Condé (born March 4, 1938 in Boké , French West Africa ( Guinea )) is a Guinean politician, multiple presidential candidate and president of the Rassemblement du peuple de Guinée (RPG) party. He has been President of Guinea since December 21, 2010. Between January 30, 2017 and January 28, 2018, Condé was also President of the African Union . 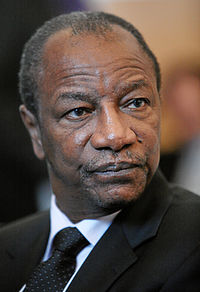 At the age of 15, Condé emigrated to France , where he studied political science and law at the Université Paris 1 Panthéon-Sorbonne . As a professor of public law, he worked for more than ten years at the Faculty of Law of the Sorbonne and was involved, among other things, in the Association of Black African Students in France ( FEANF ), where he was responsible for coordinating the various nationality groups between 1967 and 1975. In 1970, then Guinean President Ahmed Sékou Touré sentenced him to death in absentia. On May 17, 1991 Condé returned to Conakry .

For decades Condé fought against the various dictatorships that ruled Guinea for a long time. In the presidential election in Guinea in 1993 , he won 19.55% of the vote despite what was likely to be massive electoral fraud on the part of the opposing side. After winning a good 16% of the vote in the next presidential election in Guinea in 1998 , he was arrested and sentenced to five years in prison on charges of illegally leaving the country and recruiting mercenaries to overthrow President Lansana Conté released early. When Alpha Condé was excluded from the elections in the 2003 presidential election in Guinea on charges of conspiracy, President Lansana Conté won a good 95.6 percent of the vote against the backdrop of an extensive boycott of the opposition parties.

In the first round of the 2010 presidential election in Guinea , Condé won 18.29% of the vote and qualified for the runoff election against former Prime Minister Cellou Dalein Diallo . In the runoff election on November 7, 2010, he received 52.52% of the vote. On December 3, 2010 the result was declared valid by the Supreme Court, and on December 21, 2010 he took office as the new President. On October 11, 2015, Condé was re-elected President.

On January 30, 2017, Condé was elected President of the African Union for one year . On September 27, 2017, Condé was awarded the Russian Order of Friendship , which was presented to him the next day during his state visit to Russia.

At the end of 2019, Condé announced that he would apply for a constitutional amendment by referendum that would allow him two more terms of six years each. Two opposition parties withdrew from the planned 2020 parliamentary elections in protest .

On September 5, 2021, there was a coup by members of a special army unit against Alpha Condé. Soldiers arrested him. Colonel Mamadi Doumbouya declared the government to be relieved on the same day. The Ministry of Defense initially claimed that an attack on the presidential palace had been repulsed.

Personal and political points of view

Alpha Condé belongs to the Mandinka people . He is a Sunni Muslim, but has spoken out against political Islam several times. In 2015, he announced the closure of educational institutions where the niqab would be worn. In 2016, Guinea resumed official diplomatic relations with Israel that had been interrupted since the 1967 Six-Day War.

Alpha Condé was married several times. His first marriage to Mina Koné, a former flight attendant from Ivory Coast , gave birth to his only son, Mohamed Condé. After the divorce in 1973, he married Nènè Kanny Diallo, but divorced again in 1998. He accused his wife of collaborating with his political opponents. In 2010 he got his third marriage to Fanta Djénè Kaba.

President of the African Union