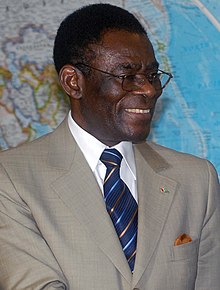 Teodoro Obiang Nguema Mbasogo (born June 5, 1942 in Akoakam-Esangui ) has been the dictatorial ruling President of Equatorial Guinea since 1979 .

Teodoro Obiang was born in the Mongomo district of Río Muni , the mainland territory of the Spanish colony at the time, as the third of ten children of a Roman Catholic immigrant from Gabon . It is one of the catches that make up the majority in the country. After primary school in Mongomo, he attended a Spanish church college in the coastal town of Bata. After attending school, he joined the Territorial Guard in 1963 (when the country was granted limited autonomy) and was sent to the Zaragoza Military Academy in Spain that same year . After his return in 1965 he served in the Territorial Guard in Mikomeseng on the border with Cameroon . He came back as a second lieutenant.

In the following years Obiang u. a. in Bata and in Santa Isabel (today's capital Malabo) on Fernando Póo (today's Bioko). After his uncle Francisco Macías Nguema , previously mayor of Mongomo, became Equatorial Guinea's first president with independence, Obiang quickly made a career. In 1969 he was promoted to Lieutenant Chief of the National Guard and a year later to captain, commander of the armed forces stationed on Fernando Póo .

On August 3, 1979, he overthrew his uncle, Francisco Macías Nguema , in a coup and had him killed after he came to power. After the formal assumption of the presidency in October 1979, he promised a reform of the state and relief for the population exploited by his uncle. During his extremely repressive reign, the country's population had declined by about a third. In 1981 he reconciled with Spain, with which his uncle had broken up, and received economic aid. He slowly detached the country from close ties to the Soviet Union and allowed the church to resume activity after his uncle declared Equatorial Guinea an atheist state in May 1978 .

After Obiang initially served as chairman of a military council, he introduced a new constitution in 1982, which was adopted in a referendum on August 15, 1982 with 95.38% of the votes and came into force seven days later. In April he had appointed Cristino Seriche Bioko as Prime Minister. The new constitution began his first seven-year term as "elected" president. The old unity party PUNT was dissolved after he came to power, the election of the 41 members of the new parliament on August 28, 1983 took place without parties. In 1987 he founded a new unity party, the Partido Democrático de Guinea Ecuatorial (PDGE), which won all seats in the parliamentary elections in July 1988. He himself was re-elected in June 1989 with 99% of the vote.

In the course of the general democratization in Africa after 1989, Obiang Nguema changed his course at least superficially and had a new constitution approved in a referendum on November 16, 1991 with 94.3% of the votes. On November 21, 1993, elections with multiple parties took place for the first time since 1968, in which his PDGE received 68 of the 80 seats. Foreign observers described these elections as not being fair. After his second seven-year term as President, he was re-elected on February 25, 1996 with 97.85% of the vote this time. The opposition boycotted these elections. The next parliamentary elections on March 7, 1999 brought his PDGE 75 of the 80 seats. He was able to win the presidential election on December 15, 2002 with 97.1% of the vote. The four opposition candidates had withdrawn in advance, Celestino Bonifacio Bacalé still received 2.2%. In the next parliamentary elections on April 25, 2004, his PDGE ran as part of a coalition that received 98 of the 100 seats, the PDGE alone 68. His former Prime Minister Cristino Seriche Bioko founded the opposition party VDDC at the end of 2004, which aims to replace it.

In March 2004, Obiang said a plot against his government had been uncovered, in which the intelligence services of the United States , Great Britain and Spain were involved. 15 people were arrested and shortly afterwards a group of 70 mercenaries led by Simon Mann was arrested at Harare Airport in Zimbabwe . There was no evidence of any connection between these mercenaries and government agencies. In general, Obiang Nguema has good relations with the western world. The fact that Mark Thatcher later admitted a participation in this coup attempt caused a stir .

Elections since 2009 and question of succession

Obiang Nguema was confirmed in office on November 29, 2009 with an election result of 95.4% of the vote. The remaining votes were due to four opposing candidates. The opposition and human rights groups accused the government of electoral fraud.

On January 21, 2017 Mbasengo took the deselected, but resigned after massive external pressure ex-president of Gambia , Yahya Jammeh in his country.

In the event of his death, his son Teodoro Obiang Nguema Mangue , the incumbent forestry minister, is considered a potential successor.

Teodoro Obiang Nguema Mbasogo is one of the richest heads of state in the world. His net worth is estimated at $ 600 million.

Under Nguema, there is torture and ill-treatment of activists from opposition parties or members of the Bubi ethnic group . In February 1997, Nguema publicly admitted that human rights had been systematically violated and announced measures to be taken to remedy the situation; however, in January 1998 further human rights violations occurred. The government continues to refuse permission to set up local human rights organizations.

Ever since Equatorial Guinea became an oil producer, the country's elite have enjoyed growing prosperity. The country, which was poor even under Obiang Nguema's government, became the third most important oil producing country in sub-Saharan Africa after Nigeria and Angola . Rachel Maddow writes about the "resource curse" in this context.

2016 sued the lawyer William Bourdon on behalf of the NGO Sherpa , committed to the defense of the victims of economic crime to use, and Transparency International , are committed to fight against corruption, the President-son "Teodorin" Nguema Obiang Mangue in Paris because of embezzlement and embezzlement of public funds, corruption and money laundering .

President of the African Union