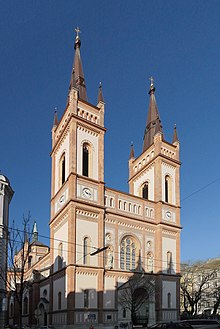 The Altlerchenfeld parish church to the seven refuges is a Roman Catholic parish church in the Altlerchenfeld district in Vienna's 7th  district Neubau , Lerchenfelder Straße 111. It is interesting from an art-historical point of view as it forms a kind of transitional work between classicism and historicism in architecture. In particular, church building in its combination of architecture and painting is considered to be an example of a total work of art in the sense of the Romantic conception of art and one of the main works of historicism in the architecture of Vienna. Patronage are the seven refuge .

Initially, the head of the court building authority, Paul Sprenger, planned a classicist church, but later, for cost reasons, a switch was made to a simpler design in the Roman Renaissance style with large-scale raw brick or plastered buildings. In February 1848, Sprenger's project was approved by the Kaiser, and the foundation walls were completed by July. The revolution of 1848 gave the building a different direction for two reasons.

On the one hand, the building of the church became the trigger for a debate on style. Some architects of the younger generation, especially Leopold Ernst , suggested an orientation towards medieval (Romanesque or Gothic) forms instead of those of the Renaissance or Classicism, as this was more appropriate for church buildings. Johann Georg Müller served as the mouthpiece of this movement. On April 20, 1848, he gave the lecture “The German Church Building and the New Renaissance Church in Altlerchenfeld” in which he rejected the imitation of the Renaissance style in favor of a national architectural style.

On the other hand, there were protests from architects against the constant tutelage by the court building council. In the meantime, however, in the course of the revolution, the Austrian Association of Engineers and Architects was founded, which immediately requested a tender. With the help of Minister Franz von Pillersdorf , this was finally achieved. Müller's was chosen as the best design and work began after only a two-week standstill. After just a few months of the incessant dispute, however, Müller was killed by a degenerative lung disease.

The construction management was now taken over by Franz Sitte , who was appointed by him and who proceeded according to his plans. In 1853 the shell was finished and Eduard van der Nüll and Josef Führich could begin with the furnishings and the painterly design, which is done with a gold ground. The church has sparse orientalizing elements, such as the different colored arches or pilaster strips with arched friezes. The parish building has domed windows, stilted arches and risalits.

The apostles Peter and Paul by the sculptor Johann Preleuthner are located above the main portal . Other sculptures come from the sculptor Josef Gasser . The vestibule shows the creation myth. The side walls show the life story of Jesus. The left side walls of the main hall show pictures of the Annunciation, the birth, the baptism and the Sermon on the Mount. The right side walls of the main hall show images of the Ascension, Pentecost, Mount of Olives and Resurrection. On the side aisles there are representations of the 4 prophets of the Old Testament. In the dome there are allegories of the 8 bliss. The side altars show the Last Supper on the left and the Vienna Madonna on the right with Kahlenberg in the background.

The organ comes from Alois Hörbiger and was consecrated on January 26th, 1860 during a "festive organ rehearsal". The case is made to a design by Van der Nüll and the figures are from Franz Erler . In 1955 the organ was repaired and in 1964 Philipp Eppel rebuilt the organ to 38 registers and two manuals using the existing organ case.