Attack on the Moselle

The Simson and the Moselle shortly before the bomb attack

The scene shortly after the bomb attack 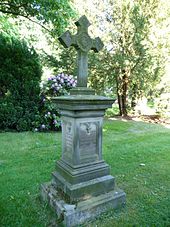 Grave of the victims in the Wulsdorf cemetery

The attack on the Moselle , also known as the Thomas catastrophe , was an explosives attack on December 11, 1875 in Bremerhaven on the emigrant ship Mosel . The motive was insurance fraud . Although the explosion was triggered prematurely, 83 people died. The Canadian Alexander Keith jr. from Halifax who died as a result of a subsequent suicide attempt.

The steamship Mosel was an emigrant ship of the North German Lloyd from Bremerhaven. On December 11, 1875, under Captain Leist, replacement for the sick Captain Hermann Neynaber, it was supposed to leave for a crossing to New York , whereby it was planned to take shipwrecked people from Germany , which had recently sunk , in Kent . Most of the passengers came from southern Germany and had come by train.

After the passengers had boarded the New Harbor , the Moselle was towed through the lock into the outer harbor by the tugboat Simson . There she docked again briefly at the southern jetty in order to take the last pieces of cargo and passengers on board before the final departure. The quay was filled with numerous onlookers and parting parties.

When one of the last pieces of cargo, a particularly large and heavy barrel, was lifted by a cart around 11 a.m., it detached itself from the crane, hit the quay pavement and exploded in a huge pillar of fire, the pressure wave of which everything on the quay and the two of them Brought ships to overturn. Metal and wood splinters flew through the air, there was a wide hole in the bow of the Moselle and a four-meter-deep crater remained on the quay.

“A mushroom-shaped column of smoke almost 200 meters high rose over the harbor. Everywhere people lay screaming and whimpering next to rubble. The whole pier was covered in soot. It was like the forecourt of hell. ”This is how a sailor reported, who had observed the scene from a neighboring ship. As it later turned out, the thud of the explosion had been heard "miles away" in the country. Bremerhaven's main street was littered with the splinters of shattered shop windows.

At around 5 p.m., six hours after the explosion, groans were heard from a first-class cabin and found a man covered in blood, the passenger William King Thomas. He shot himself two bullets in the head, but survived. The assumption that the attempted suicide was related to the attack was confirmed: Thomas confessed to the act on December 16.

William King Thomas , who was actually called Alexander Keith Jr., came from Halifax, eastern Canada . He was active as a blockade breaker and agent for the Confederate during the American Civil War and was previously suspected of having carried out an explosives attack. In 1864 he had to flee his hometown because he had embezzled money and settled in St. Louis , USA, where he married his wife Cecelia, with whom he had four children. On the run from his victims of fraud, he came to Europe, lived for a short time in Vienna , Linz and Leipzig and finally moved to Dresden , where he lived a lavish lifestyle and frequented the better circles of society.

The gambling addict Thomas soon had money problems again and wanted to solve them through insurance fraud. In 1873 he commissioned a clockwork from the tower clockmaker Johann Ignaz Fuchs from Bernburg (Saale) that would run silently for ten days and then trigger a violent blow from the hammer. After completion in 1875, he used it as a detonation mechanism for the explosive Lithofracteur , which he had previously bought as a supposed mine owner from Jamaica in the Cologne-based explosives factory of the Krebs brothers, and disguised the bomb as a harmless cargo. He wanted to ship the explosive device and other, completely worthless luggage with high insurance sums.

His first attempt failed because the bomb did not detonate. On another ship, the purser did not want to take the cargo on board without seeing it.

On the Moselle , however, his plan seemed to work. Keith intended to disembark in Southampton . The Moselle should explode during the crossing over the Atlantic and go down with the approximately 400 passengers and crew on board. Keith then wanted to collect the high insurance money in the UK. Presumably the impact of the barrel on the pavement of the quay triggered the ignition mechanism and led to the premature detonation of the barrel filled with thirteen hundred pounds of explosives.

Probably out of fear of discovery and punishment, Keith tried to shoot himself after his plan had failed. He died a few days later in a Bremerhaven hospital from the severe head injuries he suffered. The criminal police had been able to question him beforehand.

Although the original attack plan was narrowly thwarted by chance, 83 people died as a result of the detonation of the bomb, 6 of them on board the Moselle . Around 200 people were injured and mutilated, some seriously. The dead left 56 widows and 135 orphans . The 41 Bremerhaven victims were buried on December 14, 1875 in the Bremerhaven cemetery in Wulsdorf .

The attack, the most serious explosives crime in Germany to date, caused a great deal of public attention and set off a wave of willingness to help. A total of around 450,000 marks (around 3,350,000 euros based on today's purchasing power) was collected for the surviving dependents of the victims and the injured.

In 1977 Udo Proksch sank the ship Lucona with explosives with the aim of insurance fraud.