In the Working Group of Mennonite Congregations in Germany ( AMG ), three Mennonite regional conferences work together with a total of 56 congregations. The Mennonites are one of the oldest Protestant free churches .

The working group was founded in 1990 by three regional Mennonite community associations. Representatives of the regional associations met as early as 1982 to discuss Germany-wide cooperation. A year later, the first joint congregation day took place. In 1986 the nationwide Anabaptist-Mennonite community magazine Die Brücke was published for the first time . Finally, the establishment of the Association of Mennonite Congregations (AMG) was prepared for 1990.

Both the regional associations and the working group are legally recognized as a corporation under public law . Most of the communities are in Baden and the Palatinate , where numerous descendants of the Mennonite Swiss brothers live.

Interior of the Sembach Mennonite Church

According to the Mennonite understanding of faith and community, which assigns ultimate sovereignty to the local community and only recognizes superordinate associations in the sense of a voluntary working group, the AMG is not a nationwide church government, but rather it fulfills certain assigned tasks of common interest. The churches themselves are understood as the image of the New Testament church. The leadership here is usually in the hands of elders , preachers, and deacons .

The purpose is, among other things, the organization of conferences and seminars as well as the publication of the journal Die Brücke - Anabaptist-Mennonite community journal . In addition, the Mennonite Yearbook appears once a year . In 2004 the AMG published a new Mennonite hymn book together with the Mennonites in Switzerland . The AMG represents the German communities in the Mennonite World Conference .

Formally, AMG members are not the individual municipalities, but the three regional associations, which in turn are represented by their municipalities at the AMG General Meeting.

Building of the Bienenberg Theological Seminary

The Working Group of Mennonite Congregations works with several Mennonite plants and institutions. The facilities are maintained directly by AMG or by the municipalities and regional associations within AMG. Together with Mennonite parish associations in France and Switzerland, the German Mennonites support the Bienenberg training and conference center in Switzerland , which also has a theological seminar .

In many parishes, work with the elderly is done by volunteers from the Menndia - Mennonite Diakonie . The church youth work takes place in two associations for the north and south. 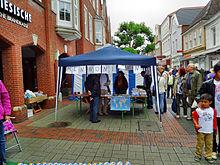 Most Mennonites see themselves connected with all Christians who confess Jesus as Lord and want to live according to his teaching and keep their churches open to them.

The AMG is a member of the Association of Evangelical Free Churches in Germany, the Diaconal Working Group of Protestant Churches, the German Committee of the World Day of Prayer and the Working Group of Christian Churches in Germany . The membership in the World Council of Churches , which had existed for a long time through the VDM, was transferred to the AMG at the end of 2016.

The AMG is internationally connected with other Mennonite churches and community associations in the Mennonite World Conference . Between 2000 and 2015 there was a church partnership between AMG and the Meserete Kristos Church in Ethiopia.