In 1984, after the restoration of the square was completed, children play in the relaxed inner courtyards 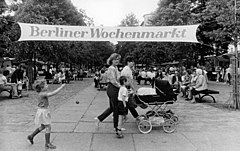 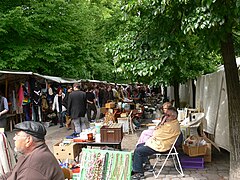 The Arkonaplatz is a 1.5-  hectare town square in the Berlin district of Mitte of the district of the same name and belongs to the historic Rosenthaler Vorstadt district . It was created in the middle of the 19th century.

The town square was named after the cliff Cape Arkona on Rügen following a cabinet decision of November 22, 1875 .

Arkonaplatz was planned and laid out according to the Hobrecht plan as place C of Dept. XI and according to the building regulations of 1853. It got its name in 1875 and it began to be developed into a residential area along with the neighboring streets.

Instead of being designed as a jewelery square by Hermann Mächtig in 1887, Albert Brodersen provided the square with a children's playground in 1918 . The magistrate later arranged to decorate the square with sculptures . In 1927 a pelican and a seal made of shell limestone by Martin Müller , a penguin and an anglerfish by W. Schade , also made of shell limestone, and four children's groups made of bronze by Georg Hengstenberg for the paddling pool . The square with its surroundings developed into a quarter for poor parts of the population. During the Second World War , around 1,000 of the more than 4,000 apartments on its borders were destroyed. The tenement houses destroyed in the war were demolished and new apartment buildings were built in their place in the 1950s and 1960s.

The GDR was the place from the 1970s to restore consuming or partially modernize the areas were redesigned. On the occasion of the extensive renovation (called reconstruction at the time) of the residential area around Arkonaplatz, for example, the section of Swinemünder Strasse that ran across the (today's) square was closed to public traffic and integrated into the square. A weekly market has been held here regularly since around 1985 .

After the end of the GDR, the square developed into a preferred residential area for young families. Children use the spacious playground here, parents use the gastronomy that surrounds the square. In contrast to trendy districts such as Helmholtzplatz and above all Kollwitzplatz in Prenzlauer Berg as well as the tourist areas of the Spandau suburb in Mitte, the square is considered quieter and has retained much of its originality.

On the west side of the square is one of the oldest school buildings in Berlin (now a primary school), but it is not a listed building. On the east side there is a disused historical toilet house.

Within walking distance are Zionskirchplatz , Bernauer Strasse , which was previously shielded by the Berlin Wall, with Mauerpark, and Kastanienallee and Oderberger Strasse in Prenzlauer Berg, which are characterized by restaurants and retail outlets .

The Schwedter Straße with the controversial investment project on the former Marthashof is also nearby.

The Sunday flea market on Arkonaplatz is well known beyond the Rosenthaler Vorstadt.

After the renovation work was completed in 1984, the entire residential area was opened to the public in the presence of the GDR State Council Chairman Erich Honecker . On this occasion, for example, in the then vegetable shop in Wolliner Strasse 10, shop window displays could be admired, which visibly distorted the reality in the shops of the GDR . For example, there were pineapples in the shop windows - a fruit that was very rarely offered in the GDR. The day after Honecker's visit, the fruit had disappeared from the shop windows.

According to legend, the brothers Fritz and Max Lindner and Otto and Willi Lorenz had the idea of ​​founding Berlin’s most famous football club, Hertha BSC , in 1892 on a bench on Arkonaplatz - where they often played football themselves.