During her school days in Jelgava, fourteen-year-old Elza began to write poems in German. Her thirst for knowledge and enthusiasm for literature earned her the nickname "Aspazija" with friends and teachers, with which she signed her first poetry publication in the feature section of the daily newspaper Dienas Lapa (Tageblatt) in 1887 . In 1886 she married for the first time; the marriage was unhappy, and soon after the wedding her husband fled to the United States, never to be seen again. From 1891 to 93 Aspazija worked as a tutor; During this time she wrote her first plays and the poem Saules meita , which, however, did not find a publisher. It did not appear in print until 1894, after she gained fame through her plays, some of which were scandalous.

Angry about a review in Dienas Lapa of her play Vaidelote , in which she felt misunderstood, she confronted editor-in-chief Jānis Pliekšāns - only to fall vehemently in love with him shortly afterwards. Pliekšāns, a trained lawyer, was one of the masterminds of the left anti- tsarist movement Jaunā strāva ( New Current ). Aspazija encouraged him to resume his literary attempts - as a youth he had received ridicule for his poems and then put his quill aside - and recommended that he also use an artist name for his first publications in January 1896; he decided on the name Ranis , under which he would become the "Latvian national poet" in the course of the following years. In 1895/96 the couple lived temporarily in Jelgava and Berlin and in 1897 in Panevėžys , Lithuania , where Rainis settled as a lawyer. In May d. J. he was arrested there for treason within his own ranks and held in various prisons in Panevėžys, Liepāja and Riga until the end of the year . During her imprisonment, Rainis finished the translation of Goethe's Faust into Latvian, which was begun at Aspazija's suggestion and which she worked on in constant exchange . the text appeared practically parallel to its creation in sequels in the monthly Mājas Viesa Mēnešraksts .

Since Rainis, as a lawyer, had managed to annul the marriage between Aspazija and her first husband, the couple were able to get married between Rainis' release from prison and his departure to his place of exile in the Russian hinterland - only as a wife, Aspazija was entitled to exile him visit. From 1898 to 1903 Aspazija traveled as often as possible between Slobodskoj and Riga, where she worked as a translator and editor for both of them; the exhausting journey lasted several days. Soon after his return to the General Government of Livonia, Rainis took part in the revolution of 1905 , after which he and Aspazija had to flee Russia.

For fourteen years the couple lived in exile in Switzerland in Zurich and Castagnola in Ticino , where Rainis wrote his most important works and Aspazija - restricted by various illnesses and her duties as a housewife - wrote three of her twelve volumes of poetry as well as her childhood memories. After the end of the First World War and the liberation struggles in the newly founded Republic of Latvia, the two poets returned to their homeland in April 1920; they received a triumphant welcome, including two of Riga's central streets being renamed after them. Both went into politics for a short time, Aspazija was a member of the Constituent Assembly. After a twenty-year hiatus, she resumed her work as a playwright and continued a lively and varied writing activity until the end of her life. After Rainis' death in September 1929, she also took care of his literary estate.

Aspazija's first drama Atriebēja (The Avenger, 1887) emerged from a competition organized by the Latvians in Riga as the winning play, but its production was stopped by the tsarist censorship. The plays Zaudētas tiesības (Lost Rights, 1894) and Neaizsniegts mērķis (An Unreached Goal, 1895) aroused public debate because of their criticism of patriarchal society.

“Aspasia (Mrs. Else Pleekschan), the highly talented Latvian poet, who is dear to every heart within her people and whose name is on everyone's lips, is known only by a few of our compatriots of other nationalities. Ada Negri's name echoes over to us from Italy, Ada Christen's name is known and mentioned here, but her kindred spirit Aspasia, who is no less than both of us who lives among us, is not even known in her own home by those , the one speak a different language than that of the small people from whom this rich, brilliant poetic individuality has sprung. "

- From a review of the resumption of the Vaidelote play in the Rigaschen Rundschau on May 16, 1902 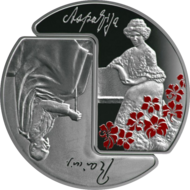 Memorial coin of the Latvijas Banka from 2015

For the first time in the young Latvian literature, which in the true sense of the word did not begin to emerge until the middle of the 19th century, Aspazija did not lay out a » flower harvest« with her volume of debut poems Sarkanās puķes . H. an arbitrary sequence of individual poems, but a dramaturgically composed cycle in four programmatic parts, similar to a four-movement symphony. Coinciding with the first poem Musu dzīve (Our Life) provide continuity ago, it is the epilogue (in his epilogue ) of its 1891 written and 1894 appeared in print in 1577-line epic poem ' Saules meita acts (The sun daughter). The focus of the ten poems of the first section or sentence Bez ideāla (Without Ideal, in the first edition also Bez mērķa / Without a goal) is an isolated, starving lyrical self caught in everyday life, which in the second movement is Pusdienas karstumā (In the heat of midday, nine poems), kindled in love, connects with a you; In the seventh poem Mans miers ir beigts (There is my peace) the passion becomes so vehement that although the iambic meter is retained, the rhyme is overcome - for the first time in Aspazija's lyrical oeuvre. It is no coincidence that six of the ten poems in the third movement are taken from Maldu ugunis (Irrfeuer) Aspazija's dramas Antonija (1892, lost, one poem), Vaidelote (Die Waidelottin, 1894, one poem) and Ragana (The Witch, 1896, four poems) : here the world affects the lyrical heroine. Finally, the fourth movement, the grand finale Gaismas straume (stream of light) with its sixteen poems, some of which are longer and which make up a third of the volume in terms of size, deals with the past and "the lukewarm" to deal with the "poet of the future "And" With wings white as snow "to proclaim freedom, which, however, will come bloody and red, as" vision of horror ", as" Last Judgment ": a revolution?

Aspazija's second volume of poetry Dvēseles krēsla (Dawn of the Soul, 1904) is the only one that the author has not divided into sections or sentences; nevertheless, a dramatic structure is unmistakable here too. The last twelve of the 50 to 63 poems in the volume, depending on the edition, skilfully serve the genre of Black Romanticism, which came back into fashion around the turn of the century .

In exile in Switzerland, the four or seven-part concept poetry volumes of Saulain's stūrīt (i) s (Sonnig [e] s Eckchen, 1910) and Ziedu klēpis (An Armful of Blossoms, 1911), the first two parts of a » Lyric Biography «; in addition, the volume Izplesti spārni ( Spread wings, 1920), which is divided into six sections, brings together poems written between 1908 and 1918. Three years after returning to the now sovereign and pacified Republic of Latvia after the wars of liberation in 1919 , the third and last part of the "Lyrical Biography" was published with Raganu nakts ( Witches' Night , 1923). In Castagnola , Switzerland , the two famous exiles are honored by the only Aspazija and Rainis monument outside of Latvia and by their own small museum. In Zurich, a memorial plaque was attached in 2006 to the tenement building at Usteristrasse 14, where Aspazija and Rainis lived for a while in 1912 during their Swiss exile, and a QR code plaque was added in 2018. On the occasion of the 150th birthday of Aspazija and Rainis, the Latvian Bank issued a 5 euro commemorative coin in 2015 (see illustration above) and the Latvian Post issued a double special stamp.

In Latvia there are currently eight streets (lett. Iela ) or squares (lett. Laukums ) named after Aspazija :

The heir to the throne grove in Liepāja was renamed to Zaļā birzs (Green Grove) during the Soviet occupation, on January 29, 1920 in Aspazijas birze (German during the Nazi occupation "Aspasia Grove") .