The title of this article is ambiguous. Further meanings are listed under baker (disambiguation) . 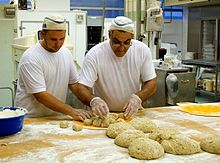 The baker is a person who makes a living baking bread , rolls , biscuits and fine baked goods . Baker is a craft and training occupation . A workplace set up to practice this profession is called a bakery .

Differentiation between baker and confectioner

The job title baker is sometimes used colloquially for the profession of confectioner ( confectioner ). Confectioners, however, specialize in sweet goods and do not make bread products. In Germany and Austria there are also separate professions for which different journeyman examinations have to be taken. Many bakeries also produce products that are part of the confectioner's trade. Bakers who have learned or worked in such bakeries are referred to as "bakers with pastry experience". 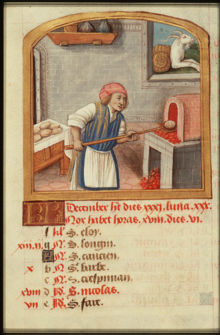 Medieval depiction of a baker

The patron saint of bakers is St. Nicholas of Myra .

The craft of the baker used to be divided into

These distinctions were first abolished in Prussia in 1752, as they led to constant friction, also to the detriment of customers. The baker's profession was one of the free, free, and open crafts. The authority of a master to bake was called the (baking) justice or also the bank . As early as Roman law , the bakers were united into their own corporations, and in the Middle Ages the formation of bakers' guilds was promoted through the granting of privileges . However, their rights were accompanied by certain obligations. The bakers were supposed to help prevent general emergencies by providing a constant supply of flour.

In Paris and in some French departments the bakers were united in closed corporations under the direction of syndicates in 1801 . Authorization was then required for operation. The purpose of a special bakery fund was to equalize the price of bread by making advances to the bakers in expensive times. This facility existed until 1863.

The German trade regulations finally released the bakery trade. According to Section 73, however, bakers could be encouraged to make the public aware of the price and weight of their goods at the shop.

The baked goods were traditionally sold in the shops of the master bakers, who were run as a family business. These bakeries obtained the flour from the local millers . With industrialization, more and more large bakeries emerged which, in addition to fresh baked goods, also produced frozen dough pieces in so-called baking lines. Initially intended as an expansion of the range, the local bakeries took over the baking and sale of these dough pieces alongside products from their own production. At the same time, these baked goods were increasingly being offered as finished products in supermarkets and petrol stations. Due to the increasing price pressure , caused by a lot of competition , many traditional bakers had to give up their operations or were taken over by chain stores in the last few decades. In the suburbs, train stations and large shopping centers, discounters have recently established themselves , which bake frozen dough pieces in the sales room .

After a mostly three-year dual training in the bakery trade, the journeyman's examination is taken in front of the regional guild. Immediately afterwards, the journeyman baker has the opportunity to continue his education at a technical school and then take the master craftsman's examination in front of the Chamber of Crafts . This training can be done in a master's school (e.g. Akademie Deutsches Bäckerhandwerk Weinheim (Federal College), Bakery College Hanover , Saxon Bakery College Dresden-Helmsdorf , First German Bakery College Olpe, Academy Bavarian Bakery Crafts Lochham ) or at the local guild. The previously required five-year apprenticeship as a requirement for admission to the master craftsman examination has been dropped. After successfully completing the master craftsman's examination, you acquire the right to practice the profession of baker independently and to train trainees in this profession.

In France, too, there is training (apprentissage) to become a baker (French Boulanger).

The training is a bit narrower than in Germany and Switzerland, the baker literally "only" bakes baguettes and other breads, but no croissants, for example (the confectioner is responsible for this). But there are already over twenty different types of baguette , some of which differ significantly in terms of dough and baking process.