A trainee , known as an apprentice in Austria as it used to be in Germany and formerly known as an apprentice daughter in Switzerland , is a person in vocational training in German-speaking countries ( Germany , Liechtenstein , Austria and Switzerland ) . The training (earlier apprenticeship) concludes with an examination to become a journeyman , skilled worker or with a final examination.

Vocational training generally lasts 2 to 3.5 years. Further training to become a master or technician is possible.

In Germany, every company that trains according to the dual system must have at least one trainer in accordance with the trainer aptitude ordinance (AEVO or ZusatzEignV). The authorization is tied to natural persons. At the same time, there are also purely school-based training at vocational schools ( vocational colleges in North Rhine-Westphalia, OSZs in Berlin and Brandenburg or vocational schools ). The trainees then have student status .

A training contract is concluded between the trainee and the trainee, which regulates the mutual rights and obligations as well as the training content. Sometimes this refers to the respective collective agreement , e.g. B. in the public service on the TVAöD . The course of the training is laid down in a training plan.

Apprentices are under the special legal protection of the Youth Employment Protection Act until they are 18 years of age . With regard to the termination of a training contract by the trainer, special regulations apply that are standardized in the Vocational Training Act .

From the Middle Ages to the beginning of industrialization, the apprentice was a member of a master family . At the same time as the apprentice started his apprenticeship, his teacher took on maintenance (board and lodging ), custody and guardianship of the apprentice, who owed him unconditional obedience in addition to the tuition fee . The apprenticeship contract included a pledge of obedience and faithful service on the part of the apprentice. Up to the 20th century there was also a statutory right to punishment (right to "paternal discipline") of the teacher over the apprentice.

The apprenticeship began with a trial period , usually a few weeks, during which the teacher was convinced of the general abilities of the apprentice, after which the apprentice was entered in the guild book , which was compensated with the registered guilder . The tuition was not inconsiderable and was between about 20 and 50 guilders per year in the late Middle Ages and early modern times . The apprenticeship period was usually longer than it is today and, depending on the profession, lasted between three and more than five years, or even more if the tuition fee could not be paid. The apprenticeship ends with the journeyman's piece , which has been submitted to the local guild council since the development of the guild system. 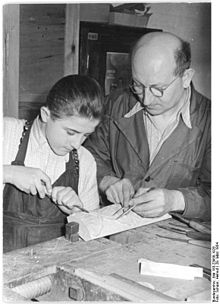 Apprentice and master craftsman in a GDR furniture factory in 1954

Despite its relative lack of rights, the apprentice played a social role far above the servant before industrialization : The reasons are that the concept of apprenticeship only existed in the guild professions (honest professions), the tuition fee and the prospect of further professional advancement - The skilled trades in particular showed a structure that was not inherited from families at that time and in which technical skills were of great importance.

The following important information is missing from this article or section:
Industrialization and modernity
Help Wikipedia by researching and pasting it .

The general term apprentice was replaced in West Germany in 1971 by the term trainee. In colloquial language, the abbreviation trainee is often used , for female apprentices also trainee , or the former term is widely used. Apprenticeship boys and girls are also used regionally. In the GDR , the official name was apprentice until German reunification on October 3, 1990 .

Vocational training is regulated in the Vocational Training Act (BBiG). The duration of the training is two to three and a half years, depending on the apprenticeship and school qualification. A trainer according to BBiG is authorized to train .

Apprentices are not allowed to work overtime in Germany. The working hours of the trainees are around 40 hours per week , depending on the collective agreement . The provisions of the Youth Labor Protection Act apply to young people .

During their training, trainees receive a salary, but a training allowance , which mostly the same social security - and tax obligations subject.

The training is concluded with a two-part written and oral examination by the relevant professional chamber and the vocational school. After passing the exam, the apprentice may use the following designations:

For some professions, different designations apply, such as B. in agriculture or in legal and health care.

In some professions, people with a disability have the opportunity to complete training as a specialist .

As a conclusion, he takes the final apprenticeship examination (LAP). After the exam, he is a journeyman or skilled worker . This test is a prerequisite without Matura or trade school the title of master and to obtain access to some independent professions to get, and the authorization as an instructor train itself apprentices.

This list of professions has recently been shortened by politicians in favor of the liberal professions . The companies like to rely on trained skilled workers , but not all companies like to train. That is why public authorities repeatedly offer discounts in order to increase the training quota.

The training is carried out in two ways, the apprentice is both a trainee in a company and a student at a vocational school. Depending on the federal state and industry, this can take place a few weeks per year of apprenticeship or individual days each week.

In Austria around 40,000 schoolchildren take up apprenticeships every year.

Apprentices learn one of the more than 200 professions in the dual ( triple ) system (occasionally also in training workshops or in full-time schools - business schools / less at specialist schools). In addition to the BBG, the Vocational Training Ordinance (BBV) is also relevant. A person responsible for vocational training is authorized to teach .

In the training framework , a part of the Education Regulations to a profession, the contents of the operational program is defined. The educational regulations as well as the apprenticeship time and vocational school curriculum are determined by the state government in agreement with the social partners .