The origin of the airline was the establishment of the DLV Air Transport Services Directorate ( Bulgarian : ДВС Дирекция Въздушни Съобщения ) in 1947. The first flight took place on June 29, 1947 from Sofia to Burgas. The domestic route Sofia- Varna followed shortly afterwards , from August 2, 1947. The first international connection was Sofia-Budapest, which was opened on August 12, 1947. Then, with the help and participation of the Soviet Union, a new company called TABSO was founded, which started its flight operations with two Lisunow Li-2s in autumn 1948. Soviet pilots and technicians were also deployed on the Bulgarian airfields for this purpose. In 1954, this airline went entirely to the Bulgarian state. The freight business could be expanded with the fleet of some Antonov An- 12s . The first machines of this type joined the fleet in 1963 and were taken over directly by the manufacturer.

Development from 1968 as Balkan Bulgaria Airlines

Since 1968 the airline has been officially trading under the name Balkan Bulgarian Air Transport. Later, however, only the name Balkan Bulgarian Airlines was used. As early as 1962, the first Ilyushin Il-18 aircraft could be purchased. These turboprop aircraft made it possible for the state airline to fly to distant destinations, for example Kenya and Peru were now regularly served. Similar to other airlines in Eastern Europe, the first Tupolev Tu-134 short- and medium-haul jets were acquired from the manufacturer in 1968 . From 1972 the first Tupolev Tu-154 aircraft were obtained from the Soviet Union . As with the Tu-134A in 1968, Balkan Bulgarian Airlines was the first foreign customer of this type ever. In the form of the Tupolew Tu-154B or Tu-154B-2 and Tupolew Tu-154M series, these aircraft were to have a decisive influence on the character of the fleet until the mid-1990s. Although the Ilyushin Il-62 was also a long-haul jet available from the Soviet manufacturers, Balkan Bulgarian Airlines had never decided to purchase these aircraft, rather the Tu-154 were used on these routes. With three million annual passengers counted in the mid-1970s, the Balkans had the highest number of passengers of all airlines in the Eastern Bloc. Contrary to what is usual with Western airlines, the Balkan Bulgarian Airlines also had helicopters. These included the models Mil Mi-4 and Mil Mi-8, which were used almost exclusively on the less frequented domestic routes and were used for transport and special tasks. With the onset of the second oil crisis in 1979, the difficult years began for Balkan Bulgarian Airlines. The annual number of passengers sank below a million carried passengers and the high fuel costs caused a high deficit. It was not until 1985 that more passengers could be counted than before the start of the oil crisis. By the end of the 1980s, the number of passengers increased to three million. In three equal parts of around one million passengers per year, these were divided between domestic flights, charter flights and scheduled flights.

Especially during the summer months, there were high numbers of passengers in charter flights. The tourist destinations on the Black Sea coast , for example, were served by all major airports in the GDR , including flights from Berlin-Schönefeld , Dresden , Erfurt and Leipzig-Schkeuditz airports to Burgas and Varna .

Connection of society in the communist economic and state system

Balkan Bulgarian Airlines was a purely state-owned airline from its inception until it was sold in 2002. During the communist era in Bulgaria, like other companies, it was bound by the five-year plan and had to meet the respective budget figures. In the system of that time, many tasks were bundled that were separated in western economic systems and performed by different providers. Agricultural flights were just as much a part of the airline's tasks as government flights for politicians and members of the Central Committee. Furthermore, the company had its own travel agencies in almost all Bulgarian cities, capitals of the socialist brother countries and occasionally in various other European and North African capitals and large cities. Maintenance and repair was another big part of society. Large maintenance yards were set up in Sofia, Varna and Burgas and smaller yards were based at the regional locations. Overall, the company was one of the largest Bulgarian employers during the communist era.

In late 1967, TABSO founded a subsidiary called Bulair for charter flights (both passenger and cargo) , which operated under the IATA code DB. Mainly destinations in western countries were flown to, z. B. in the Federal Republic of Germany, Austria, Sweden and Great Britain. Aircraft of the types Ilyushin Il-14 , Ilyushin Il-18 and Antonov An-12 (these for cargo charter) of the parent company were used with their own livery .

In 1972 Bulair was dissolved and reintegrated into the now Balkan Bulgaria Airlines parent company. At that time, their fleet consisted of one Ilyushin Il-14 and Antonov An-12 and four Ilyushin Il-18s. 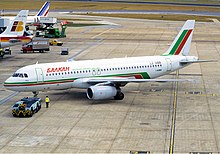 A320 of the Balkan Bulgarian Airlines

The political changes of 1989 were also momentous for Balkan Bulgarian Airlines. The company, which was heavily subsidized by the Bulgarian state until 1989 , ran into financial problems and was kept afloat financially by an Israeli consortium in the mid-1990s . However, it was not taken into account that all previously lucrative destinations in the Arab world would cease to exist (which made up a large part of the traffic) and that bankruptcy could no longer be avoided in the early 2000s .

A major change has also taken place in the area of ​​the fleet. With the opening of the Iron Curtain , a targeted search was made for modern and efficient aircraft. As early as November 1990, three Boeing 737-500s could be integrated into the fleet. On December 21, 1991 the first leased Airbus A320-231 (Reg. LZ-ABA ) from the Orix fleet came into the Balkan Bulgarian Airlines fleet. Three more aircraft of this type followed in the spring and summer of 1992 (Reg. LZ-ABB to LZ-ABD ). Two Boeing 767 -200ERs were taken over for destinations with high passenger numbers and remained in the portfolio of Balkan Bulgarian Airlines until the beginning of 1999. At the same time, the number of Tupolev Tu-154s, which were primarily used for targets in Eastern Europe, was continuously reduced .

The further expansion of the fleet with two additional Boeing 737-300s from the Lufthansa fleet and the deployment of two ATR 42s in late autumn 1999 are only of episodic nature .

After Balkan Bulgarian Airlines went bankrupt in October 2002, the Bulgarian state founded Bulgaria Air as its successor in 2002 .

In the years before the fall of the Wall, many small airports such as Russe , Targovishte , Plovdiv and Veliko Tarnovo were served , which were closed after 1989 when the subsidies were discontinued. Some of these airports are primarily military airfields. Later, only the international airports of the cities of Sofia , Varna , and Burgas were used within Bulgaria .

From 1992, leasing contracts for machines of the types were Airbus A320-231 , Boeing 737 -300 and 767 completed -200. These new flight patterns within the Balkan fleet were used almost exclusively on the routes to Western and Northern Europe, for example on the routes to Copenhagen , Frankfurt , Düsseldorf , Barcelona , Zurich-Kloten , London-Heathrow and London-Gatwick .

The long-haul aircraft of the type Boeing 767 flew z. B. routes to New York but also to Asia and were occasionally used on intra-European routes.

From 1948 until the end of operations in 2002, TABSO, Bulair and Balkan Bulgarian Airlines suffered 23 total aircraft losses. 529 people were killed in 14 of them. Extracts: