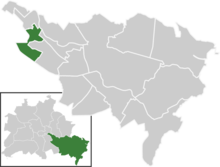 Späthsfelde is a settlement and location in the Treptow-Köpenick district of Berlin, near the Königsheide , and belongs within this district to the Baumschulenweg district and officially part of Berlin since the Greater Berlin Act of 1920 . Until the district reform in 2001, Späthsfelde was part of the former Treptow administrative district .

The actual settlement is located in Berlin-Baumschulenweg between the Königsheide and the Teltow Canal , and is bounded to the northwest by Späthstrasse and southeast by Johannisthaler Chaussee .

The Späthsfelde location itself is also understood to mean the entire area bounded by the Britz canal in the north, the Königsheide in the north-east, the Johannisthal waterworks in the south-west and the Teltow Canal to Britz in the south and west . In addition to the Späthsfelde settlement, this also includes the Daheim settlement north of Späthstrasse .

The Späthsfelde area is characterized by single-family houses, permanent allotment gardens as well as the extensive facilities of the Späth'sche tree nursery and the arboretum created by Späth . The settlement is at an altitude of 34  m above sea level. NN has around 2400 inhabitants (2004).

Späthsfelde is connected to the A 113 via the Späthstraße (opened July 2004) and Johannisthaler Chaussee (autumn 2005) junctions .

The ground plan of the settlement consists of an almost right-angled street grid: parallel to the valley line, which the Teltow Canal follows, as well as the Königsheideweg (which separates the Späthsfelde from the Königsheide), four access roads run (from southwest to northeast): Privetweg, Aprikosensteig, Mahonienweg (older Part) as well as Alpenrosenweg. However, the individual parcels of the settlement can mostly be reached from the south-west-north-east running access roads: Johannisthaler Chaussee, Agavensteig, Berberitzenweg, Späthsfelder Weg, Thujaweg and Mahonienweg (new section).

former Späth mansion from 1874 on the arboretum site ; since 1961 location of scientific research and part of the HU

Franz Späth, who studied botanist and is the fifth generation owner, bought most of the Rudower and Britzer Wiesen between Britz and Johannisthal from 60 different owners in order to relocate his family's traditional nursery here. The nursery was founded by Christoph Späth outside Berlin in front of the Hallesches Tor in 1720 and relocated to Köpenicker Landstrasse in the historic Luisenstadt district in 1760 . On the newly acquired meadows that later the district designation Baumschulenweg got Franz Späth founded in 1865, the nursery L. Spaeth (named after his father Ludwig), which was to become the late 19th century to the largest nursery in the world. The contiguous, fully planted area was 120 hectares at the time  .

In 1879, Späth had an arboretum built in the enlarged garden of his house , which was designed in the English garden style according to plans by the Berlin city gardening director Johann Heinrich Gustav Meyer . From 1961, the arboretum has belonged to the Humboldt University and has been open to the public since April 1 through October 31. Concerts and guided tours take place several times a year in what is now called the Späth-Arboretum . B. on the long night of science .

The construction of the Teltow Canal and the Britz connecting canal from 1900 onwards led to a drop in the water table, which meant that parts of the tree nursery could no longer be used economically. To compensate, a new tree nursery was built in Ketzin in Havelland. The abandoned areas in Britz (not yet Berlin) were parceled out and sold. The brisk construction activity led to the emergence of the Späthsfelde settlement with allotment gardens such as Britzer Allee , Silberlinde , Gemütliches Heim , Späthswalde and the like. a.

For Späthsfelde rather atypical single-family house, built after 1990 in the former restricted area

From 1961 to 1989 parts of Späthsfelde were restricted area in the shadow of the Berlin Wall . In the course of the construction activity that started again from 1990, the development was condensed by dividing the property and adding and renovating it. From 2000, the Zapf settlement "Späthsches Viertel" was built on another former part of the Späth'sche tree nursery as a larger row house settlement (in two construction phases, each with its own apartment owner association ).

In 2003, the Späthsfelde settlement was named third in the Berlin traffic cell in the still up-to-date social structure atlas with the best value in the social index.