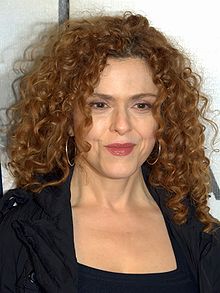 Bernadette Peters' ancestors come from Italy . Her mother Marguerite appeared on television shows. Bernadette Peters attended the Quintano School for Young Professionals . She made her debut in the TV movie George M! from 1970. In the television comedy Once Upon a Mattress (1972) she already played a larger role, similar to the film drama Ace Eli and Rodger of the Skies (1973).

For her role as a singer in the silent film comedy Silent Movie (1976) as well as for her role in the television series Say That Again Darling , she received two Golden Globe Award nominations in 1977 . She was nominated for an Emmy Award in 1978 for her guest appearance on the Muppet Show . In 1980 she achieved a top 40 hit in the US singles charts with a cover of a Carla Thomas hit, Gee Whiz . In the comedy Dance in the Clouds (1981) she played one of the leading roles alongside Steve Martin , for which she received the Golden Globe Award in 1982. In 1985 she won the Tony Award for her role in the musical Song and Dance . Her most important musical roles in Broadway premieres were Mabel in Mack and Mabel by Jerry Hermann in 1974, the double role Dot / Marie in Sunday in the Park with George by Stephen Sondheim in 1984 and the witch in Into the Woods by Stephen Sondheim in 1987. Peters also gave numerous concerts, recorded records and took part in the film adaptation of the musical Annie in 1982 .

In 1987, Peters received her star on the Hollywood Walk of Fame . In the action comedy Pink Cadillac (1989) she played one of the leading roles alongside Clint Eastwood . For the role of the stepmother of Cinderella in the fantasy film Cinderella (1997), she was nominated for the 1998 Golden Satellite Award . In 1999 she won the Tony Award again for the role in the musical Annie Get Your Gun . For the role of Cassandra Lewis in the television series Ally McBeal , she was nominated again in 2001 for an Emmy Award. Since January 2018 she has played the leading role in a revival of the successful musical Hello, Dolly! seen on Broadway. She took on the role of Bette Midler .