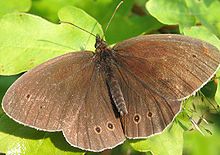 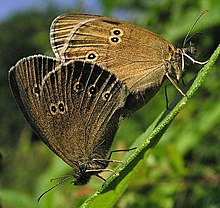 The brown forest bird ( Aphantopus hyperantus ) is a butterfly (day butterfly ) from the family of noble butterflies (Nymphalidae) and is also known as the chimney sweep . The specific epithet is derived from Hyperantus, the son of Egyptus from Greek mythology .

The brown forest bird is a common, medium-sized butterfly with a wingspan of 35 to 42 millimeters. The upper and lower sides of the wings are monochrome brown with small, yellowish-edged eye spots . The number and size of the eye spots are variable; they may be missing on the upper side of the wing, while only the white nuclei are visible on the lower side. It is then the rare form of arete that occurs in Central Europe and southern England . As a rule, however, the eye spots are clearly visible on the underside of the wings, especially on the hind wings. Aphantopus hyperantus flies together with the great ox-eye ( Maniola jurtina ).

The caterpillars are about 25 millimeters long. They are gray-brown or light reddish in color and have dark, same-colored and very fine dots. There is a dark longitudinal line on the back, which is more powerful and punctiform at the segment boundaries. This line is more intensely colored towards the rear. The head is darker in color and has several faintly visible longitudinal stripes.

The animals are distributed from northern Spain ( Cantabrian Mountains and eastern Pyrenees ) across almost all of Europe , in the north to Ireland , Great Britain and Fennoscandinavia , in the south to northern Greece ( Macedonia , Thessaly ). However, they do not occur on the Mediterranean islands and the Apennine peninsula . To the east, their distribution extends across the temperate latitudes of Asia to the northeast of the People's Republic of China and Korea , where they can be found up to an altitude of 1,600 meters. They inhabit grassy, ​​damp or dry forest clearings with bushes. There is a strong connection to forest and shrubbery edges with blackberry hedges as well as to high herbaceous borders.

The moths can usually be seen with their wings folded together so that the characteristic underside can be clearly seen. On cool days, however, they try to soak up the sun's warmth with their wings spread out. The moths can be seen very often on field thistle ( Cirsium arvense ) or swamp thistle ( Cirsium palustre ), dost ( Origanum vulgare ), forest scabious ( Knautia sylvatica ), blackberry blossoms or hogweed ( Heracleum sphondylium ). The males fly slowly, uninterrupted fluttering over and between grass stalks in search of newly hatched females. 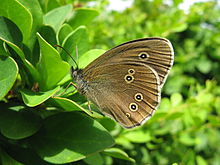 The moths fly in one generation from mid-June to late August.

The caterpillars feed on numerous sweet and sour grasses , particularly well shaded by blackberries . The forage plants include:

The female sheds the non-stick eggs in slow low flight over grasslands. The caterpillars overwinter and pupate between grasses that are spun together. The doll usually stands upright in the doll's chamber.