Entrance to the BBC in Baden around 1900

The Brown, Boveri & Cie. (official abbreviation BBC ) was a Swiss electrical engineering company based in Baden . It was founded in 1891 by Charles Brown and Walter Boveri and at the turn of the 19th and 20th centuries rose to become a leading international company specializing in the manufacture of electrical machines , turbines and electrical equipment for locomotives . On February 8, 1988, the BBC merged their business with the Swedish ASEA to form ABB . 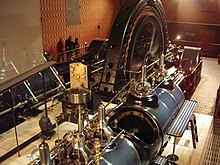 Brown, Boveri & Cie. Synchronous generator from 1901 in the Électropolis Museum in Mulhouse , France

Industrial steam turbine from 1902 in the Deutsches Museum , Munich

Electric locomotive Ae 4/6 of the SBB

In 1887 Charles Eugene Lancelot Brown , director of the technical department at Maschinenfabrik Oerlikon (MFO), decided to found his own company. He found a business partner in Walter Boveri , the head of the assembly department at MFO. Boveri took on the task of finding investors, but was initially unsuccessful. It was not until he got engaged to the daughter of the Zurich silk industrialist Conrad Baumann in 1890 that he received a generous loan from his future father-in-law.

On December 20, 1890, Brown and Boveri signed an association agreement. The brothers Karl and Louis Pfister, who wanted to promote industry and build a power station in Baden, Switzerland, learned of Brown's and Boveri's plans in January 1891 and got in touch with them. They praised Baden as an ideal location (inexpensive building land, numerous cheap labor, connection to the railway network) and guaranteed the construction of the city's electricity station as the first order. The choice of bathing as the location fell on February 23, 1891, the establishment of the general partnership Brown, Boveri & Cie. took place on October 2, 1891. In February 1892, production could begin.

The BBC distinguished itself early on through numerous innovations . BBC developed the transformer system and the generator for the three-phase transmission between Lauffen and Frankfurt on August 25, 1891 during the International Electrotechnical Exhibition in Frankfurt am Main . In 1893 the company built the electricity center in Frankfurt , the first AC thermal power plant in Europe. In order to secure long-term contracts for his rapidly growing company, Boveri was involved in the founding of numerous electricity companies, for example Motor-Columbus and the Northeast Swiss Power Plants . Brown, in turn, secured numerous patents for the BBC and, with the construction of the world's first thermoelectric locomotive, laid the foundation for the all-electric traction of trams and railways.

In 1900 the BBC turned into a public company and began expanding abroad. In addition to Baden, Mannheim-Käfertal in particular developed into an important location for the group. The company also gained a foothold in several other European countries with various subsidiaries (1901 in France, 1903 in Italy ). The AEG acquired the majority of shares in 1904/05, joined them but to 1915 again; since then the share capital has been widely diversified. From around 1910 the BBC was the largest group in the Swiss mechanical engineering industry . The strong increase in demand for large power plants and the incipient electrification of the railway networks contributed in particular to this.

Under their general director Karl Schnetzler (1876–1950) Brown, Boveri & Co. supported Ferdinand Sauerbruch in founding his company DERSA , which manufactured prostheses from 1919 to 1920.

In 1924 the two company founders died in quick succession. While Brown had retired into private life in 1911, Boveri remained Chairman of the Board of Directors until his death. During the Great Depression has been greatly slowed growth, the BBC had to drastically reduce the workforce, in 1931 the US subsidiary of Allis-Chalmers sell and 1938 even a capital cut to make.

As a diversification, electronics was added to the business program in 1937 . Over the next few decades, this new business area comprised radio transmitter construction , radio relay systems , commercial radio equipment, measurement and control technology, as well as the manufacture of components such as RECOMA magnets, liquid crystal displays and power electronic components . In these years, the workforce in Mannheim reached around 15,000 people, probably the largest subsidiary of a Swiss company in other European countries.

In 1939, the world's first market-ready gas turbine , which was largely developed by the Swiss engineers Adolf Meyer and Claude Seippel, was followed by renewed innovation. Thereupon the company expanded further, after the Second World War, increasingly overseas. Another world first was the ring accelerator in 1951 . From 1956 the pebble bed reactor - nuclear power plant by Rudolf Schulten was conceived as an epoch-making development, but it failed in 1989, which led to the extensive dissolution of the corresponding company divisions.

In 1960, Rondo-Werke Berning & Co. from Schwelm, a household appliance manufacturer, was taken over.

In 1965 the BBC achieved a turnover of 1.308 billion DM and employed 38,000 people. In 1967 she took over the MFO (the former employer of the company's founders) and in 1969 the Ateliers de Sécheron , which further consolidated her position in the construction of electric locomotives . The group also became known for its powerful range of electric motors, which ranged from a few watts to 2000 kilowatts and was very popular in the industry. BBC became the market leader in engine production alongside Siemens . The company also manufactured DC motors , AC motors , three-phase motors , generators , gas and steam turbines for power plants , transformers , turbochargers , particle accelerators and betatrons . Household appliances (including kitchen stoves, electric grills, refrigerators and chests) were also part of the product range.

In 1987 the group comprised 159 companies on five continents. While the BBC was considered to be highly innovative, it also had increasingly declining profitability and its products were generally more expensive than its competitors. In addition, the rivalry between the Baden parent company and the legally independent subsidiary in Mannheim had a negative impact on the entire group. Billions in investments in high-temperature reactors like the THTR-300 turned out to be a flop.

The Independent Expert Commission Switzerland - Second World War (ICE) found out that the BBC had not employed any concentration camp prisoners in its main plants in Mannheim and Heidelberg , but at least one other plant employed “slave” workers, defined in the report as “foreign Civilians, prisoners of war and concentration camp inmates ». The subsidiary Stotz-Kontakt employed prisoners from the Buchenwald concentration camp "most likely for several months" and it was also "very likely" that the prisoners were employed in a power plant for IG Farben in Auschwitz .