from Wikipedia, the free encyclopedia
This is the sighted version , flagged on August 28, 2020 . There is 1 pending change that has yet to be viewed. 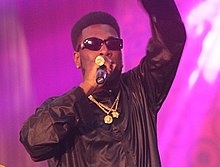 Burna Boy (born July 2, 1991 in Lagos ; real name Damini Ogulu ) is a West African dancehall and reggae musician from Nigeria . He has been successful in his home country since 2012 and also internationally since 2018. He was best known for his participation in the UK number one hit Own It by Stormzy and Ed Sheeran and his album African Giant , both in 2019.

Damini Ogulu started playing with music software on the computer at the age of 10 and over the years he developed his own style of music. Above all, he brought together two styles of music that played a role in his home: reggae was his father's preferred genre and his grandfather had been the manager of Fela Kuti , the founder of the indigenous Afrobeat . After graduating from school, he studied in England for two years, but dropped out and returned to Nigeria. He met the producer LeriQ and started professional studio recordings at the age of 19.

In 2012 he had his first hit under the name Burna Boy. The single Like to Party even attracted international attention and with the accompanying album Leaving an Impact for Eternity (LIFE) , on which Wizkid also contributed, he even entered the top 10 of the US reggae charts the following year. It also earned him a nomination in the Newcomer category of the MTV Africa Music Awards and national awards.

The separation of LeriQ and his label before his second album brought his career to a standstill. On a Spaceship could not confirm the first success and there were no more hits. Only the collaboration with the producer Juls brought him forward again from 2017. With the album Outside , he reached number 3 on the US reggae charts in 2018. Above all, however, he relied on collaborations with well-known artists such as Fall Out Boy , Major Lazer and Beyoncé . The collaboration with British musicians such as Lily Allen , J Hus and Dave proved to be particularly successful . Good Time as guest singer for J Hus brought him first place in the British singles charts in 2017 . Location with Dave rose to number 6 in the UK in 2019, the song became a long-running hit. It stayed in the charts for over a year, went double platinum and was nominated for Song of the Year at the BRIT Awards .

His fourth album, African Giant , entered the top 20 of the UK charts in the summer and was also successful in French-speaking countries. In the USA it reached a top 10 position on the world music charts. It was also nominated for an award in this category at the 2020 Grammy Awards . It was followed in the same year with Be Honest together with Jorja Smith , another English top 10 hit. After all, he worked with Stormzy and Ed Sheeran on Own It : the song rose to number 1 in the UK in early 2020 and was a hit across Europe.

As a guest musician

1 My Oasis could not be placed in the official German single charts, but reached fourth place in the single trend charts (August 7, 2020).