After it was founded, the Chemins de fer du Jura initiated the technical renovation of the acquired railway lines. The La Chaux-de-Fonds – Noirmont – Saignelégier – Glovelier line was electrified with 1500 volts direct current . The Saignelégier – Glovelier section was also converted from normal to meter gauge. On the Tavannes – Noirmont line , the contact line voltage was increased from 1200 to 1500 volts. The existing electric locomotives BCe 2/4 and Ge 2/2 from the Chemin de fer Tavannes – Noirmont were only used for secondary tasks.

For operation on their narrow-gauge network, the CJ procured the eight BDe 4/4 I and three De 4/4 luggage railcars from the Swiss Industrial Society (SIG) in Neuhausen am Rheinfall and from the Société Anonyme des Ateliers de Sécheron (SAAS) in Geneva and control cars that go with both types of railcars . The vehicles handled practically all traffic on the CJ's narrow-gauge network until 1986.

The car bodies of the BDe 4/4 I are made of light steel construction. The voltage of the four self-ventilated drive motors is regulated with an SAAS hopper control . The wagon body rests on two SIG torsion bar - bogies . The four axes are driven by SAAS lamellar drives. The multiple control enables remote control from the Bt 701–706 control car and multiple traction , also with the De 4/4 401–403 luggage railcar . Upon delivery, the BDe 4/4 I were painted in dark red and cream.

BDe 4/4 I 606 in 1978 with VST standard paintwork. The control car still has the original paintwork. 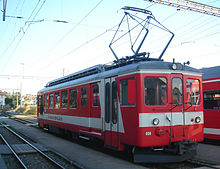 BDe 4/4 I 608 with the current CJ paintwork and swing doors.

When the third car class was abolished in Europe on June 3, 1956 , the railcars were given the designation BDe 4/4. In 1960/61 the metal letters "CJ" on the side walls were replaced by glued logos. In 1963/64 the railcars were equipped with the ZST-90 train protection system and the compressed air whistles were replaced by macrophones . From 1970 the wooden benches were upholstered. In 1971, thanks to improvements in the drive motors, the top speed could be increased from 60 to 70 km / h.

In the 1970s, the BDe 4/4 606 was given the VST standard paintwork on a trial basis . The paintwork didn't work and a year later the vehicle was painted red with a white stripe. Later all vehicles received this paint.

The procurement of the GTW ABe 2/6 in 2001 made it possible to take part of the BDe 4/4 I out of operation. The railcars no. 603 and 606–608 that were still required received swing doors instead of folding doors without anti-trap protection.

In order to have a replacement vehicle with first class when the BDe 4/4 II was revised, a first class compartment was installed in vehicle no. 603 in 1986. The converted railcar was given the designation ABDe 4/4 603.

Location of the vehicles

The railcars and control cars that were no longer needed came to various other railways: