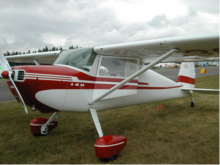 Cessna 140A with single wing strut

The Cessna 140 completed its maiden flight on June 28, 1945; the simplified Cessna 120 followed in 1946.
They were the original model of all single-engine Cessnas up to the present day and designed as simple and inexpensive aircraft that should contribute to the spread of aviation.

The Cessna 140 was the more luxurious version of the two models. It had flaps lift aid , extra rear side windows and a complete electrical system, which allowed, on request, a radio or navigation equipment, landing lights, starter motor and an additional fuel pump to retrofit. The drive consisted of a Continental - piston engine C-85-12F with 63 kW (85 hp), an air-cooled 4-cylinder horizontally opposed engine. A C-90 engine with 67 kW (90 hp) was optionally available. In 1946 a Cessna had to pay $ 140,3495.

The Cessna 140A was produced towards the end of the series from 1949 to 1951. They were only available with the Continental C90 engine with 67 kW (90 PS). Cessna 140A models can be easily distinguished from the other Cessna 140 or 120 models by the simple wing support. In the previous models, on the other hand, there is a double, V-shaped support. Another distinguishing feature is the paneling of the wings with aluminum . The maximum take-off weight has been increased by around 23 kg to 681 kg.

The Cessna 150 is seen as the successor model, although production did not begin until 1957.