Sky over Frankfurt am Main, January 2012: Such contrails are interpreted by proponents of this conspiracy theory as "chemtrails". 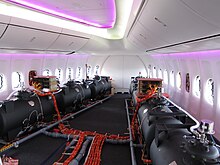 Ballast tanks filled with water in a 747-8I prototype during a test flight. The images are sometimes viewed as evidence of chemical application.

The term chemtrails [ ˈkem.treɪlz ] ( listen ? / I is a suitcase word from English Chemicals for “ chemicals ” and Contrails for “ contrails ”, German for “chemical strips ”), occasionally also poison clouds , and has been used in connection with one since the 1990s Years of widespread conspiracy theory used for a supposedly special type of contrail.

These contrails are not supposed to be traced back to aircraft exhaust fumes condensed at high altitudes, but rather, according to conspiracy theory, to the deliberate global spread of chemicals or additives that absolutely do not occur during normal operation of the aircraft. It is claimed that chemtrails are more durable than normal contrails and that they spread over a wider area. However, further spreading cirrus clouds resulting from contrails are well known as contrail cirrus .

On the other hand, agricultural and military aircraft (see e.g. Agent Orange ) or aircraft for the so far ineffective local weather control ( hail defense ) bring chemicals into the lower atmosphere, which are not, however, the subject of the conspiracy theory “chemtrails”. The quick fuel drain or smoke cartridges in aerobatics are also not topics of chemtrail fans.

Geoengineering , targeted population reduction or military purposes are alleged to be motives for chemtrails . The conspiracy theory has been on the Internet since 1996 at the latest .

According to the German Federal Environment Agency, there is neither scientific evidence for the application of chemicals nor for conspicuously changed contrails. Similar statements are known from non-governmental organizations , meteorologists and state institutions, which has so far not reduced the popularity and spread of “pure fiction”.

The basis of the conspiracy theory was assumed in the mid-1990s that the US Air Force was planning to use weather control and contrails for military purposes. The Air Force sees the chemtrail theses as a hoax , with which, among other things, a strategy paper "Weather as a Force Multiplier: Owning the Weather in 2025" was supposed to have been reacted with, but without corresponding to actual military plans or capabilities at the time.

The term chemtrail describes certain long-lasting contrails that sometimes appear in grids, which are not supposed to be normal contrails consisting of ice crystals, but rather spray traces of various chemical substances. There is no agreement about the presumed composition of these allegedly existing substances, but the supporters often name barium and aluminum compounds as components.

Normally the form and speed of propagation as well as the resistance of the contrails depend on factors such as temperature, local wind speed and humidity. Contrails dissolve more quickly at low humidity. When the air humidity is high, on the other hand, exhaust particles can act as crystallization nuclei, bind additional water vapor and spread widely with the corresponding currents. An increased tendency to long-lasting contrails - often in connection with cirrus cloud formation - can be found in the area of ​​approaching weather fronts, which lift moisture into the high air layers through uplift processes (sliding up when passing through the front ). In this way the condensation level is reached.

In meteorology , contrails are referred to as man-made cirrus clouds (Cirrus homogenitus). They have been known far longer than “organized climate change” is taking place according to the conspiracy theory. The observed increase in the frequency and spread of contrails in the sky is primarily related to the strong growth in air traffic. In Germany alone, the number of flights transported has quintupled since the 1980s. With over two million take-offs and landings per year, there is accordingly a significantly larger number of contrails than before. In addition, modern turbine engines tend to produce more condensation trails; Their more efficient combustion leads to increased water vapor emissions and lower exhaust gas temperatures. The clouds formed by airplanes and their effects are scientifically investigated; they change the visibility in the atmosphere. On the other hand, increasing stripe structures represent an aesthetic change in the visible sky.

There are various attempts to explain the technical requirements of chemtrails, some of which are contradicting and technically inconclusive. According to a variant, chemicals are added to the aircraft fuels. This would prevent the proliferation of polymers , microbes, or pharmaceutically active substances, as some conspiracy theorists believe, as these would be destroyed in the combustion chambers of the engines . The spread of pure metallic or mineral substances via this route, on the other hand, would lead to high wear on the turbine blades of the engines.

Other assumptions are based on the spread of the substances by means of built-in spray devices. Such should be able to be hidden behind closed flaps on the underside of the aircraft. In this way, special spraying machines with trained staff could apply chemtrails, or the substances would be sprayed automatically, unnoticed by the pilots, from normal line machines through hollow wires on the wing edges during the flight. In fact, on sharp edges and sensors, even at lower altitudes, contrails occasionally form - supposedly secret flaps or spray systems could be discovered by service personnel and crew at the latest during the pre-flight inspection . These operations are sometimes mistaken for fuel dumping , but this is only permitted in emergencies. 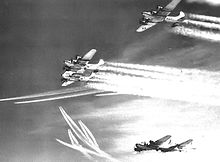 US bombers over Austria, 1944. Even then, contrails could be seen in large numbers in the sky.

Various objectives are assumed by representatives of chemtrail theory. Substances are to be sprayed in order to carry out geoengineering. So that the should global warming by reflecting sunlight weakened and thus global warming are reduced. The Welsbach patent is often cited here, which describes the possibility of reducing the greenhouse effect by distributing particles over a large area in the atmosphere. It is also speculated that chemtrails could serve to reduce the population. According to this theory, the added chemicals are said to reduce the fertility of the population or simply poison them. The film “Why in the world are they spraying?” Suspects, among other things, a targeted poisoning and change in the pH value of the soil with aluminum compounds in order to make conventional seeds unusable. Large seed corporations have long since developed preventive, genetically modified aluminum-resistant varieties.

Statements from politics and non-governmental organizations

In 2004 the magazine Raum & Zeit reported in the article "The Destruction of Heaven" about alleged chemtrails. In the period that followed, citizens asked the Federal Environment Agency (UBA) what it was all about. The Office issued a statement in March 2011 that the claims made in the said article were not credible. If there were theoretical ideas about climate protection through the application of various substances, there is therefore no evidence that these have been actually implemented so far. The UBA invokes the German Weather Service , whose observation data did not show any noticeable changes in the behavior of contrails. The German Aerospace Center (DLR) is also not aware of any such phenomena, although it has been studying the effects of aviation emissions on the atmosphere for many years. Inquiries to the German Air Traffic Control and the German Weather Service did not reveal any noticeable flight movements and contrails. The WHO has no knowledge of the existence of special chemtrails. The Department of Defense and the European Headquarters of the US Air Force announced that they were not running any corresponding projects. The Air Force also responded to theories that it was manipulating the weather with an informational paper on contrails. The Air Force is not tampering with the weather, and there are no plans to begin.

In its own article in 2004, Greenpeace magazine rated the speculation about chemtrails as a conspiracy theory and agreed with the results of the Federal Environment Agency.

Chemtrails are mentioned in the USA in 2001 in a bill, the Space Preservation Act , which was first presented to Congress by politician Dennis Kucinich . The bill was rejected and Kucinich, who was not directly involved in drafting the bill, later stated that he was unsure of the mention of chemtrails and that he was not interested in the subject.

In March 2007 Austrian members of the National Council of the FPÖ put a parliamentary question to the then Agriculture Minister Josef Pröll ( ÖVP ). The Ministry of Agriculture then made it clear that it had known the subject of chemtrails for a long time and that such processes were classified as extremely problematic, but that after extensive research there was no evidence of the spread of such substances over Austria.

In Mecklenburg-Western Pomerania, the NPD made a small request to the state parliament in 2010 about chemtrails in order to accuse the government of “weather manipulation”. Alfred Steinleitner from the NPD gave a lecture on March 16, 2011 in Deggendorf on the subject of “'Chemtrails' - Global chemical crime in the atmosphere!” The main spokesman for the chemtrails movement in Germany is the lawyer Dominik Storr , who has a legal dispute with Jörg on this subject Kachelmann led.

Measurements of the chemical composition of the air in the upper layers and on the ground have so far provided no evidence for the chemtrail hypothesis. Corresponding investigations are regarded by supporters as part of the conspiracy and thus as implausible. There are no own reviews by representatives of the chemtrail hypothesis. From the skeptical side, it is also pointed out that a global poisoning of the earth's atmosphere by chemtrails would result in such a large number of people involved among the pilots, airport employees and scientists involved that it is very unlikely that they would be kept secret.

In 2016, aerologist Ken Caldeira and a few colleagues published a survey of leading atmospheric scientists and geochemists on chemtrails. In this first expert appraisal with peer review on the topic, 76 of the 77 surveyed scientists stated that their research had not found any evidence of such manipulation of the atmosphere. The contrails visible in the sky could easily be explained using conventional chemistry and physics.