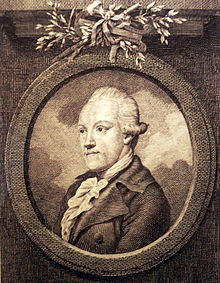 Wagenseil attended the Latin school in Kaufbeuren and began an apprenticeship as a businessman, until he was able to attend high school in Ulm and study law in Göttingen . After completing his studies, Wagenseil stayed for a year in Gotha , where he worked as a journalist for the Gothaer learned newspaper and wrote his Singspiel honesty and love .

In 1775 he met Johann Wolfgang von Goethe in Frankfurt, and during his studies in Göttingen he got to know Johann Heinrich Voss and the Göttingen Hainbund . Voss was the one who introduced him to Freemasonry there in 1777 . He was also in contact with Wieland , Schubart , Claudius and others.

In 1780 Wagenseil returned to Kaufbeuren and worked in the city administration. In addition to his professional activity, he was responsible for the restructuring of the administration under Bavarian rule from 1802, he worked for the Kaufbeurer theater industry and published the newspapers Gemeinnütziges Wochenblatt (1780 to 1786) and Intellektivenblatt (from 1787).

In 1786 he founded the Freemason Lodge Charlotte zu den drei Sterne in Kaufbeuren , which existed until 1789, and campaigned for enlightenment and against superstition . He was also a co-founder of the Kempten Lodge on the rising sun .

From 1804 Wagenseil worked as a police director in Kempten before he retired as a councilor in Augsburg in 1817 . He continued his literary activity until his death. From 1823 he was a corresponding member of the Bavarian Academy of Sciences .