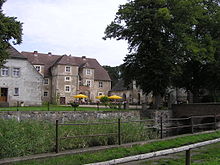 The noble Pomeranian family von Neuenkirchen had owned the Mellenthin and Gothen estates on Usedom since 1336 and Vorwerk since 1426 , the latter located between Greifswald and Wolgast . The family name is probably related to the family seat in the area around Neuenkirchen (near Anklam) , where the Müggenburg also belonged to it in the 14th century , but which it later lost.

Christoph von Neuenkirchen was the older son of the Junker Rüdiger von Neukirchen , who had the moated castle built in Mellenthin as the family seat, and Ilsabe von Eickstedt from the Rothenklempenow family . He was “born into this world at the Mellintin family” on July 25, 1567. After initial training in Anklam with the local rector, Magister Daniel Schütze, he moved to Leipzig and Jena at the age of 16 to attend the universities there. Then he went to the court of the Lord Master of the Order of St. John in Schwedt and from there to the court of Duke Ernst Ludwig of Pomerania in Wolgast, where he was accepted as court squire. Shortly thereafter, he was appointed table servant and "precutter" at the ducal table, in which service he remained until Ernst Ludwig's death in 1592. He then followed the widow Sophia Hedwig to her widow's residence in Loitz . After the death of his father (1594), Christoph von Neuenkirchen and his friend Henning von der Osten went on an educational journey (see Grand Tour ) through Germany, France, England and the Netherlands. When he returned, he took over the management of the feudal estates as the eldest son.

He was appointed captain of the offices of Usedom and Pudagla by Duke Philipp Julius . Since he proved himself in this office, he was later appointed Castle Captain von Wolgast and Privy Councilor of Duke Philipp Julius. In 1603, Christoph von Neuenkirchen was first mentioned in a document as a bailiff on Usedom. Since the Reformation, the Usedom Office has also included the extensive property of the Pudagla Monastery on the island of Usedom. He was the most powerful at the beginning of the 17th century thanks to his own property and the administration of the ducal property on Usedom , to which further possessions in the north-west and in the far east ( Westswine ) of the island were added later through the additional takeover of the administrative authority of Wolgast Man on the island of Usedom.

As captain of the Wolgast Castle , he was briefly captured in the turmoil of the Thirty Years' War in fights between King Christian IV of Denmark and Wallenstein for Wolgast in 1628. After the death of the last Pomeranian Duke, Bogislaw XIV , he left his home country, like other former ducal advisors, and moved to Lübeck.

From his brother, the court marshal Hans von Neuenkirchen , after his death in 1624 he inherited the Lindenberg office , which he had acquired as pledge from the last Duke of Wolgast, Philipp Julius , as well as the neighboring Mecklenburg office of Ivenack , which was also acquired as a pledge .

In 1641 he made his will in the Hanseatic city of Lübeck . In this he favored especially since he had no children, his sister's son Joachim Kuehne of Owstin , but also the Mecklenburg Duke Adolf Friedrich I .

He died childless in Lübeck and was buried there in the Marienkirche . Jacob Kockert , Johann Kirchmann and the Jakobipastor Gerhard Winter (1589–1661) wrote him funeral papers. His grave slab with a Latin inscription is preserved there on the south side of the ambulatory on the fourth choir pillar. His extensive property was distributed among the numerous heirs and soon after 1648 came into Swedish hands with the establishment of Swedish Pomerania (see also: Wrangelsburg Castle and Mellenthin Castle ).

The Usedomer island chronicler Robert Burkhardt published a novel in 1911 under the title: "The Last New Churches". In the well-known novel " Maria Schweidler, the Amber Witch " by Koserow pastor Wilhelm Meinhold , a junker from Neuenkirchen also plays, who as a noble knight gives the counterpart to the evil bailiff Appelmann. Behind the two figures are obviously Christoph von Neuenkirchen and Peter Appelmann , who under the Swedish Queen Christina was tenant of the Pudagla office and at times even governor of all her properties in Swedish Pomerania. In fact, these two people could never have met, because Christoph von Neuenkirchen was long dead when Appelmann appeared in Pomerania.