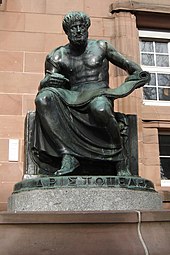 Aristotle (1915) at the University of Freiburg

Bermann completed a wood carving apprenticeship in Furtwangen in the Black Forest ; later he studied in Munich and at the Polytechnic in Zurich , where he enrolled in architecture . In 1884 he studied sculpture for two years at the State Academy of Fine Arts in Karlsruhe under Hermann Volz . After completing this degree, he moved to Munich, where he ran a private sculpture school. In 1898 he became a member of the Munich Secession , and in 1903 of the German Association of Artists . At the 10th exhibition of the Munich Secession in Munich in 1904 - it was also the first Künstlerbund exhibition - CA Bermann was represented with two marble busts ( Luitpold von Bayern , Emanuel von Seidl ) and a bronze sculpture ( Huntress ).