Eisenbach is a district of Obernburg am Main with 2517 inhabitants. 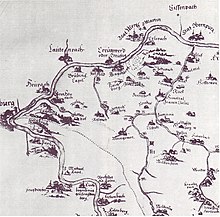 The parish village of Eisenbach is located on the lower course of the Mömling in the north-western Odenwald . Eisenbach borders in the west on the district of Rai-Breitenbach in the Hessian city ​​of Breuberg . In the north to the municipality of Mömlingen and in the south and east to the city of Obernburg, whose district is Eisenbach.

Eisenbach is geographically bounded in the north and south by two mountain ranges. The "Hungerberg" in the south-east is today characterized by extensive orchards. The "Stutzberg" located in the southwest is wooded and is used for forestry. In the north is the nationally known Mirabelle growing area "Hardt".

Eisenbach is believed to have been founded in Carolingian times. The first secured documentary mention dates back to the year 1268. At that time Eisenbach was still part of the imperial abbey of Fulda . After it had been temporarily in the possession of the Archbishopric of Mainz from 1278, it finally came to the future Electorate of Mainz in 1308 . However, the village jurisdiction lay with the respective lords of Breuberg . The ownership and sovereignty rights were additionally complicated, since the collegiate monastery St. Peter and Alexander zu Aschaffenburg owned two farms in Eisenbach from 1274.

After the Reichsdeputationshauptschluss the village came to the Principality of Aschaffenburg in 1803 . In 1810 the rulership changed again, because the principality was absorbed into the Grand Duchy of Frankfurt . In 1814, Eisenbach finally became part of the Kingdom of Bavaria .

Eisenbach is traditionally small-scale and agricultural. However, the name Eisenbach already indicates that mining was also carried out in the place. In fact, there are several iron ore and basalt veins in the mountain on the right of the Mömling between Eisenbach and Mömlingen , which made mining possible. The local chapel, built in the 11th century, was dedicated to the patron saint of miners, Saint Barbara . This is a testimony to the fact that mining began in Eisenbach early on. However, the exploitation of the ore deposits became unprofitable at the beginning of the 20th century and finally stopped in 1924. Eisenbach remained dominated by agriculture, which is illustrated by the arrangement of the orchards in the southeast and the "Hardt" mirabelle plum cultivation area, which was established in the 1930s .

The silos and the building of the grain mill Knecht, which was built in 1854, are characteristic for the entrance to Eisenbach and exemplary for the agricultural character . The mill is water-powered and, as the first milling company in Germany, decided in 1954 to produce according to Demeter guidelines. It is therefore the first organic mill in Germany.

Structurally, Eisenbach and Obernburg grew together in the 1970s and 1980s through the industrial area of ​​the city of Obernburg and the expansion of the residential area over the "Mömlingtalring".

The Eisenbacher Heimatmuseum is located on the upper floor of the former new town hall of the district. Photos, certificates, documents and devices from all areas of life are exhibited in it. The aim is to keep Eisenbach's history alive. The historical employment opportunities in Eisenbach - agriculture, small craft businesses and mining - are discussed.

The Barbarakapelle, which is part of the Catholic parish church of St. John the Baptist, is particularly worth seeing . The Barbara Chapel was built in the 11th century and is consecrated to Saint Barbara , the patron saint of miners. A first church tower and a first extension expanded the existing chapel in 1401 and created the first complete church in Eisenbach. This was also consecrated to John the Baptist . After the confusion of the Thirty Years' War , however, the building had become dilapidated and finally, at the instigation of the Ordinariate in Mainz, the nave was demolished, so that only the church tower and the Barbara chapel remained. After the demolition, the new nave was finally built in the baroque style at the beginning of the 18th century. With the growth of the parish, several additions were necessary, the last of which was carried out in 1936/37.