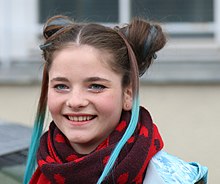 From 2008 to 2011 Neumeister sang in the children's choir at the Dresden State Operetta in the operas Hansel and Gretel and Carmen . In a solo role she worked there in the musical Jekyll & Hyde . She took acting lessons at the New Talent drama school in Hamburg .

In the crime series Wolfsland (2016) she played at the side of Götz Schubert inspector “Butsch's” stubborn, pubescent daughter Emmy. Neumeister played the 14-year-old daughter Saskia in the comedy family with obstacles (2017) and the sequel, marriage with obstacles , which was broadcast for the first time on ARD in June 2018 .

In December 2017, Neumeister was seen in a leading role in the television series In all Friendship - The Young Doctors as daughter Jenny, who had Prader-Willi Syndrome . In the second film of the ZDF crime series In Truth with Christina Hecke as Commissioner Judith Mohn, which was first broadcast on arte in September 2018 , Neumeister played Sarah Mertens, the younger sister of a murdered 16-year-old girl, who chats with a stranger on the Internet and more knows about the crime against her sister as she says.

In her first leading cinema role, Emilie Neumeister shot the feature film Im Niemandsland by Florian Aigner with Ludwig Simon as a partner, in which Neumeister and Simon play two young people from warring families who fall in love shortly before German reunification . This was followed from the end of July 2018 on the shooting of the Czech-German co-production Orangentage , a children's and family film about a teenage love between a fourteen-year-old Czech boy from a border village and a German girl, which premiered in March 2019 at the Leipzig Book Fair .

In the 29th film in the ZDF crime series Kommissarin Lucas , called Kommissarin Lucas - Tote Erde (first broadcast: August 2019), Neumeister played the role of Hanna Menz, a former member of a group of environmental activists who are campaigning for a radical agricultural turnaround . In the feature-length opening episode of the 15th season of the ZDF series The Public Prosecutor , entitled The Public Prosecutor: Zero Tolerance (first broadcast: January 2020), Neumeister played one of the episode roles as the cocaine-addicted daughter of a forwarding agent and friend of a killed Italian barista from Calabria . In the 26th film of the ZDF crime series Marie Brand (first broadcast: April 2020), Neumeister played 15-year-old Fritzi Lindow, who lost her footing in a polyamorous family constellation due to a death and tried to evade her responsibility by hastily escaping to Paris . In the TV “Comedy with Realistic Grounding” Parents with Obstacles (2020), conceived as an ensemble film , she played the older one again, alongside Nicolette Krebitz and Hary Prinz , in the third film in the TV series about the life of the Wiedermann teachers Daughter Saskia.

Neumeister has lived in Berlin since 2019 .