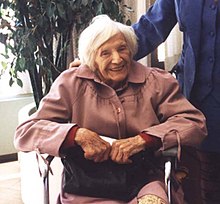 Emilie Pelzl was the second child of Josef and Maria Pelzl. The father was a wealthy landowner from Alt Moletein . In Brno she attended various schools, including an agricultural school. On March 6, 1928 she married the Sudeten German industrialist Oskar Schindler, who was a year younger than her, with whom she moved to the house of her in-laws in Zwittau . Her father disapproved of his daughter's early marriage to an "unfinished man". Her husband's factory had to be closed due to the global economic crisis . In 1936 the couple moved to Mährisch Ostrau , where they actively supported their husband in his work for German counter-espionage .

Memorial plaque on the house, Watmarkt 5, in Regensburg

In October 1939, after the German invasion of Poland , Schindler went to Krakow and founded the Deutsche Emailwarenfabrik (DEF) . From Ostrava she visited her husband twice a week until she moved to Krakow herself in 1941. Emilie Schindler began to support her husband in looking after Jewish forced laborers in the factory.

Due to the advancing Eastern Front, the evacuation of the armaments factory and the Plaszow concentration camp was imminent in 1944, and with it the threatened deportation of the forced laborers and concentration camp prisoners. The Schindler couple managed to get their armaments factory to be relocated. Both machines and workers were shipped to the newly built subcamp Brünnlitz in the Zwittau district. There was a severe food shortage in the last months of the war. In her biography she reported on "collecting donations" from the surrounding flour mills.

In January 1945, in the absence of her husband, she took about 100 Jews into the factory who had been trapped in a freight wagon for three weeks in the winter cold without food to be transported to a concentration camp . She cared for the sick and wounded herself in a hospital set up in the factory.

After the surrender on May 8, 1945, she and her husband fled to Regensburg . In the following years the couple lived on the support of the Jewish organization Joint until they emigrated to Argentina in 1949. There Emilie Schindler and her husband grew more and more apart until Oskar finally returned to Germany in 1957 and left her in Buenos Aires .

In the following years, Emilie Schindler lived in modest circumstances in Argentina, supported by Jewish organizations. A first idea for a film adaptation of Schindler's List in the 1960s could not be realized; In 1962 she sold her house and moved to a rental apartment. That same year on June 24th, her husband was named Righteous Among the Nations by Yad Vashem . In 1974 her husband died in Germany.

Emilie Schindler first appeared in public when Steven Spielberg directed the film Schindler's List in 1993 . In the final scene she lays one of the stones on her husband's grave.

There is conflicting information about her income from the film, partly due to her fading memory. After a settlement, she received the sum of $ 13,000 from her US asset manager. She met with Bill Clinton , Pope John Paul II and Roman Herzog , among others .

In autumn 1999 a suitcase with 7000 documents and photos from Oskar Schindler's estate was found in an attic in Hildesheim . The Stuttgarter Zeitung evaluated the find; Emilie received copies, but demanded the originals as her rightful heir. In mid-2001, after a settlement, she received 25,000  DM from the newspaper, but not the suitcase that is in the Yad Vashem museum. On July 9, 2001, she and Federal Chancellor Gerhard Schröder opened an exhibition in Bonn's House of History that revolved around her role in the resistance against National Socialism .

Having never returned to her adopted home in South America, Emilie Schindler died on October 5, 2001 after a stroke in a clinic in Strausberg near Berlin. On October 19, she was buried in Waldkraiburg , the Munich publisher Herbert Fleissner had tried to find the grave in Waldkraiburg.

House of History in Bonn

All awards, medals and orders are in the House of History in Bonn .

The American composer Thomas Morse and the librettist Kenneth Cazan brought out the opera Frau Schindler in Munich's Gärtnerplatztheater in 2017 .