The Evangelical Consistory in Berlin is the supreme administrative authority of the Evangelical Church Berlin-Brandenburg-Silesian Upper Lusatia (EKBO). It is located in the Evangelical Center at Georgenkirchstrasse 69 in Friedrichshain . Until 2000 it was housed in an administration building in the northern part of Berlin 's Hansaviertel , Bachstrasse 1, at the corner of Altonaer Strasse .

As the successor organization to the Catholic episcopal courts, the consistory acted as a court for matrimonial matters and, in the course of the sovereign church regiment, also took on the administration of schools and church buildings as well as the appointment and care of the clergy. As the first Lutheran church authority in Berlin, the Kurmärkische Konsistorium began its service in 1543. In the years 1735-1826 the Märkisches consistory formed one of the collegiate bodies in the college building in the Lindenstraße 15 (now renumbered 14), which owes its name this, the better known was the Court of Appeal . From 1750 to 1808 the consistory was subordinate to the Lutheran Upper Consistory of Prussia .

Seal of the Consistory of the Province of Brandenburg

After its dissolution in 1808 and the takeover of church matters by the new culture department in the Prussian Ministry of the Interior, in 1817 responsibility was transferred to the newly established Ministry of Spiritual, Educational and Medical Affairs (Ministry of Culture) . Responsible for the ecclesiastical province of Brandenburg, which has been the uniate Evangelical Church in the Royal Prussian Lands since 1817 , the authority was now called the Royal Consistory of Brandenburg in Berlin . As in the other Prussian provinces, the respective head president was the consistorial president , because the consistories were responsible for church and school matters. After school affairs were transferred to the newly formed provincial school colleges from 1845, separate consistorial presidents were appointed.

From 1850 until the Berlin-Brandenburg church province became a regional church in 1948, the consistory, like those in the other old Prussian church provinces, was subordinate to the Evangelical Upper Church Council (EOK), the new central executive body of the old Prussian regional church. The consistory sat from 1826 to 1881 at Kleine Jägerstrasse 1 in Friedrichswerder . When the city of Berlin was spun off from the political province of Brandenburg with a special status on April 1, 1881, the church province remained undivided. In 1881 the consistory moved to Schützenstrasse 26 in Friedrichsstadt .

When the Court of Appeal moved to its new domicile, which is used again today, in 1913, the consistory returned to the Collegienhaus, this time as the sole user. After the sovereign church regiment was discontinued, the consistory became a purely ecclesiastical institution and was henceforth called the Evangelical Consistory of Brandenburg ; the name was changed after 1933 to Evangelical Consistory of the Mark Brandenburg . After severe bomb damage in the spring of 1944, some offices of the consistory were relocated to the Dreifaltigkeitskirch parish halls at Taubenstrasse 3, to Forst in der Lausitz / Baršć and to Potsdam. On February 3, 1945 the college building burned down completely.

From April 1945 Otto Dibelius took over the leadership of the ecclesiastical province of Brandenburg as bishop. Dibelius, himself not a member, claimed leadership in the consistory, which was greatly reduced in terms of personnel due to deaths, impeachments, vacancies and resignations - the latter three resulted from the quarrels and paralysis of the church bodies in the church struggle . In its October 1945 edition which reported Ecclesiastical Official Journal of the ecclesiastical province of Berlin-Brandenburg that since May 1945 Konsistorialpräsident John Henry was desired stepped into the waiting, Konsistorialrat Paul Fahland retires and Konsistorialrat Hans Nordmann as pastor to the church for Heilsbronnen had been transferred . The religious consistorial members Walter Herrmann, Fritz Loerzer , Siegfried Nobiling and Karl Themel , all supporters of the German Christians, were dismissed. Dibelius filled the vacant posts with representatives of the Old Prussian Confessing Church . In its March 1946 edition, the Church Official Gazette reported Erich Andler (Buckow), Hans Böhm , Provost to St. Petri , Günter Jacob and Kurt Scharf as new members of the Evangelical Consistory of the Mark Brandenburg . In the spring of 1947, the consistory moved rent-free into the almost undamaged building of the old Prussian EOK at Jebensstrasse 3 Charlottenburg. After the city was divided in 1948, it was in West Berlin . In the area of ​​the church province, which became an independent church in 1948 under the name Evangelical Church in Berlin-Brandenburg , the consistory was the only one until 1967 and so the name suffix was dropped.

After the administrative division of the Evangelical Church in Berlin-Brandenburg into two separate regions (West and East) from 1967 and the agreement of a rent from 1969 for the rooms in Jebensstraße, the building in Bachstraße 9-10 was built for the West region of the regional church who took up the consistory of the West Region in February 1972. Only the spiritual leadership of both regions remained bundled with the common bishop elected for life in 1966 in the person of the East Berliner Kurt Scharf, who, however, had been refused entry by the GDR since a business trip to the West approved after the Wall was built at the end of September 1961.

In 2000 the consistory, reunified in 1991, moved into the building of the Evangelical Center at Georgenkirchstrasse 69, Friedrichshain, where it is still located today.

Today's function and areas of responsibility

Development and conception of the building in Bachstrasse

The building on Bachstrasse was designed by the architects Georg Heinrichs and Hans Christian Müller and erected between 1968 and 1971. The high-rise had an aluminum facade and a polygonal floor plan. 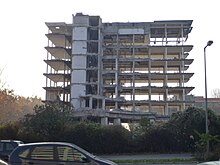 The building has stood empty since the evangelical church moved out. The demolition of the building, which began in November 2011, was controversial.

Provosts in the consistory