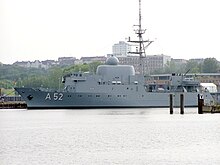 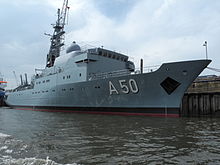 In the German Navy, a fleet service boat ( FD boat for short ) is a reconnaissance ship that is equipped with special sensors and used in the field of strategic information acquisition. The information obtained is transmitted directly to the joint strategic reconnaissance command in Gelsdorf near Bonn. In official usage it says: "The tasks of the fleet service boats include the security and maintenance of telecommunication connections as well as telecommunication-electronic reconnaissance".

During the Cold War , the task of the former fleet service boats Alster (A 50), Oker (A 53) and Oste (A 52) as well as their predecessors Eider and Trave was the optical, acoustic and electronic reconnaissance of the naval forces of the Warsaw Pact in the Baltic Sea area, in particular of the Baltic Red Banner Fleet . The electronic reconnaissance was carried out in addition to eavesdropping on radio traffic by measuring the electromagnetic signature of the radar devices used by the opposing party, which in some cases made it possible to identify certain units. That is why the fleet service boats were initially also called measuring boats . With passive sonar systems , acoustic profiles of ships / ship classes were recorded, which included both the driving noises and the signatures of the ships' active sonar systems. The optical reconnaissance consisted of making film and photo recordings of the sighted ships, whereby the antenna systems were of particular interest. To this end, the boats had to close the image motif arrive. However, due to their superior speed, these could regularly evade unwanted spying, since the fleet service boats with their maximum 15  knots could not keep up with the destroyers and frigates of the Soviet Navy. Due to their function as reconnaissance boats, fleet service boats are mostly used as single drivers with long sea endurance.

The current generation of fleet service boats are the second generation of the class 423 ( OSTE class ) that was put into service in 1988/89 . Their predecessors were specially designed for intelligence gathering and reconnaissance (NG&A). Since 2001, they are branches of the armed force in common , that is, from all branches of the armed forces together, used as sea-based and stand-off technical reconnaissance.

The fleet service boats as reconnaissance platforms with their regular crews are part of the German Navy. The FD boats are subordinate to the 1st submarine squadron (Einsatzflotille 1) in Eckernförde . The regular crew of 36 members of the Navy is responsible for the navigation and operation of the ship. There they are looked after technically and logistically.

The reconnaissance personnel (so-called on-board deployment teams See (BET See)), consisting of 40 other soldiers, provide the Strategic Reconnaissance Command (KdoStrat Aufkl) of the Cyber ​​and Information Space division and are stationed at the 2nd / Battalion Electronic Warfare 912 in Nienburg / Weser .

Due to the military conditions in the Baltic Sea , it was not possible for NATO and related states to advance with warships near the coast of the Warsaw Pact states. Therefore, merchant ships and auxiliary ships were 'misappropriated' for the purpose of gathering information.

The Alster and Oker were the former side- catching trawlers Mellum and Hoheweg . The Oste was the former salvage tug Puddefjord . The three ships belonged to class 422 . At the end of the 1980s they were replaced by new buildings. Alster and Oker were sold in 1989 and 1988 to Turkey and Greece, which they used under the names Yunus and Hermis for the same purpose in the Aegean and Black Seas. Oste was sold in 1987 and scrapped in 1990.

The German Navy has three Oste-class fleet service boats . The ships are 84 meters long and reach a maximum speed of 20 knots and a cruising speed of 19 knots. You have a range of almost 9000 km (5000  nautical miles ) without having to call at a port.

The ships were built from 1986 to 1988 by the Flensburger Schiffbau-Gesellschaft . Due to the collapse of the Soviet Union , the original location in the Baltic Sea lost its importance and the ships have been used worldwide as reconnaissance boats. The fleet service boats used to belong to naval telecommunications staff 70 in Flensburg and were subordinated to the 1st submarine squadron in Eckernförde as part of the operational flotilla 1 in the course of the reorganization of the navy .

The current ships of the Oste class are capable of various electronic reconnaissance :

In addition, the ships have fastening options for two 20-foot containers, which can contain additional equipment.

The exact dates of the devices on board are not known. According to the website of the Federal Ministry of Defense , it should be about electromagnetic, hydroacoustic and electro-optical devices for strategic information acquisition in crisis areas. The ships of the Oste class can operate on their own as well as in an active and communication network with other units and agencies of German and international armed forces.

The fleet service boats have been increasingly used in the Mediterranean since the end of the Cold War. As unarmed reconnaissance boats, the Federal Ministry of Defense can send the ships to critical regions of the world without a mandate from the Bundestag. Therefore, the exact purpose of the missions is mostly hidden from the public.

On October 24, 2006, six Israeli F-16 fighter-bombers flew over the German ship Alster , which was cruising off the Lebanese coast . They carried out a mock attack in which they shot twice from an on-board cannon above the ship and emitted glowing decoys . Israeli officials denied the incident for days. Shortly afterwards, Israeli F-16 fighter bombers threatened a German Navy helicopter at night. The then Federal Defense Minister Jung traveled to Tel Aviv shortly afterwards on these occasions.

The Alster was officially not part of the UNIFIL association, which is deployed off Lebanon and is intended to prevent Hezbollah from smuggling weapons across the sea. However, the ship belonged to the German task group, i.e. the German part of the overall association. The Defense Committee of the German Bundestag was informed about the operation in a non-public meeting.

As part of the anti-terrorist mission Active Endeavor , in 2011 NATO monitored the airspace off Libya around the clock with four to five Awacs . In addition to the frigate Hamburg (206 men), the Oker (82 men) was also involved in the anti-terrorist operation. In addition, the frigate Lübeck (220 men) and the mine-hunting boat Datteln (40 men) belonged to other NATO formations in the Mediterranean during this period.

On November 5, 2011, the Alster left Eckernförde on a secret mission to the Mediterranean. It was the first mission in the Mediterranean to be dubbed a national reconnaissance mission . The online editorial team of the Schleswig-Holstein newspaper publisher reported that both the ship's commander and the squadron commander kept a low profile about the actual aim of the reconnaissance trip. In an indirect speech, the commander is reproduced with the following statements: “However, national reconnaissance trips are not unusual to represent German interests. Those who follow the newspaper reports can see for themselves which Mediterranean countries are currently boiling during the Arab Spring. ”In recent years, the Mediterranean voyages served to monitor shipping traffic as part of NATO's Active Endeavor operation or the UN mission Unifil. This operation was about mapping the coast of the Arab Spring countries .

The Alster was, according to the Mirror in December 2011 in the eastern Mediterranean by the Syrian Navy threatened. A Syrian warship, presumably one of the two Syrian frigates of the Petya class , had its on-board cannon aimed at the fleet service boat at the end of December 2011. The Alster was 15 nautical miles off the coast of Syria.

Since it is not an armed operation, the Alster was before Syria without the knowledge of the Bundestag. The defense policy spokesman for the Greens parliamentary group, Omid Nouripour , criticized the secrecy of the operation after the incident became known. In any case, Parliament must be informed, he told Spiegel .

According to a report by Bild am Sonntag (BamS) dated August 19, 2012, an unspecified navy service boat is said to be cruising off the Syrian coast and has "the most modern spy technology of the Federal Intelligence Service (BND) on board". With the technology, the report should be able to observe troop movements up to 600 kilometers deep in Syria . The BamS quotes a "US secret service agent" as saying: "No western secret service has such good sources in Syria as the BND". "We can be proud of the important contribution we are making to the overthrow of the Assad regime," said BamS, "a BND man." According to this, Germany is playing a bigger role in the Syria conflict than previously known.

On August 19, 2012, the Federal Ministry of Defense officially confirmed the deployment of a navy ship "in international waters in the Eastern Mediterranean". The ship would be in the region for several months. It is the Oker fleet service boat . According to the Ministry of Defense, the Oker was in the Italian port of Cagliari in Sardinia in August 2012 .

The Bild am Sonntag reported on September 8, 2013 that the Oker fleet service boat had overheard radio messages in front of Syria in which division and brigade commanders of the Syrian army had asked Assad to be cleared of the use of chemical weapons. There was no indication that Assad approved the deployment in August. 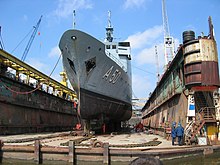 The Alster in April 2012 in the shipyard in Hamburg.