The airfield Magdeburg / City is a commercial airport in Magdeburg district Beyendorfer reason . 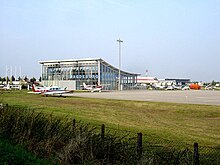 Magdeburg's first airfield was on Cracauer Anger , where Hans Grade also undertook Germany's first powered flight on October 28, 1908. From 1929 the Ost airfield existed on Berliner Chaussee, but in 1934 it had to be handed over to the Air Force.

As a new airfield for civil air traffic, today's airfield was opened as the Magdeburg Süd airfield on Leipziger Chaussee on January 4, 1936 . Regular air traffic began on April 5, 1936. From the outset, it was disadvantageous that the new airfield was located in the triangle of the already established airfields Berlin, Leipzig and Hanover. The routes Hanover-Halle-Leipzig and Hamburg-Erfurt-Nuremberg were served with a direct connection to Munich. There was a shuttle service 30 minutes before the start from the “Stadt Magdeburg” hotel near the main train station. Magdeburg was not approached in winter air traffic.

Air traffic was stopped during the Second World War . After 1945 the airfield was used by the Soviet army . From 1951 glider pilots were again represented on the site, from 1952 under the umbrella of the Society for Sport and Technology . Around 1953/54, space was returned to the city. From 1957 Magdeburg airfield was one of the bases of the agricultural flight of Interflug, along with Anklam , Kyritz , Berlin-Schönefeld airport and Leipzig-Mockau .

In 1968 the world championship in aerobatics took place at the airfield .

In July 1991, the airport was taken over by Flughafen Magdeburg GmbH, a 100% subsidiary of the City of Magdeburg. In 1993, the paved runway including approach and taxiways was put into operation. In the time that followed, significant investments were made in infrastructure such as towers, hangars and instrument approach procedures. A terminal was built in 1999 for the planned scheduled and charter flight operations. Since there were no scheduled flights and charter flights only sporadically, the terminal remained largely unused and was later used by bus travel companies and today (May 2019) by a restaurant.

In 2001 it was decided to extend the runway running in west-east direction to 1,800 m. However, the decision was previously and later - as with many airfields - heavily controversial. While the parliamentary groups of Bündnis 90 / Die Grünen and PDS as well as parts of the SPD and a citizens' initiative argued against the expansion, the CDU and parts of the SPD spoke out in favor. The opponents of the expansion referred to the already developed 40 km away but practically unused airport Magdeburg-Cochstedt .

Due to a lack of finances, the expansion plans have been suspended since 2005. The plan approval process originally carried out is still effective due to the purchase of various pieces of land for the expansion and the start of measures, according to the expansion proponents. The citizens' initiative, on the other hand, has had a (brief) report for years that the plan approval decision is unlikely to be invalid due to no substantial construction work. A final clarification about the validity of the planning approval decision would then only be possible through a superordinate legal process.

At the end of February 2007, Mayor Lutz Trümper proposed closing the airfield. The reason is that the city of Magdeburg has budget problems. Trümper wanted the Magdeburg airport staff to be taken over by Cochstedt airport. However, the country refused to take over. The city council then decided in September 2007 to keep the airfield.

Effective January 1, 2009, the operation of the airfield was leased from the municipal airport Magdeburg GmbH to the private FMB Flugplatz Magdeburg Betriebsgesellschaft mbH for an initial period of 10 years.

There are no charter or scheduled flights. The runway is too short for some of the jets used for this. The airfield is mainly used by air sports enthusiasts (glider pilots, parachutists), microlight pilots and private pilots as well as for sightseeing flights.

The airfield is 5 km south of the city center near the A 14 , exit Magdeburg-Reform . It can be reached from the city center by tram line 9 (night bus N3) in the direction of Reform .

On March 27, 2019, a US Air Force Bell Boeing V-22 had to make an emergency landing at the airfield due to engine failure. The Osprey was on her way from her British base to a NATO maneuver in Poland. After the repair, for which u. a. a new engine with a Lockheed C-130 was flown in, the machine could start again.

According to the official IATA code database as of February 9, 2018, no IATA code has been assigned.