The flooding plume ( Glyceria fluitans ) is a species of the sweet grass family (Poaceae). Further common names are manna swaths, duck grass and grütz swaths. It is common in Europe. 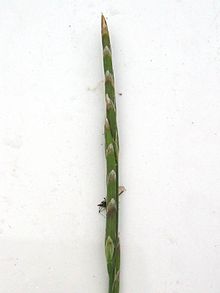 The flooding swath is persistent and reaches heights of 30 to 100, rarely up to 150 centimeters. It forms loose clumps , but lawns in shallow water; the foothills are long and underground. The renewal shoots grow up outside the lowest leaf sheaths . The often prostrate or arching, smooth, bare and flattened stalks can be rooted at the lower nodes .

The leaves are alternate. The smooth, bare leaf sheaths are closed up to the top and compressed at the sides. The ligule is a membranous border 5 to 15 mm long and thus longer than the leaves are wide. The green to rarely gray-green, bare leaf blades are ribbed on the upper side, 8 to 24 cm long, 3 to 10 mm wide and rough on the edges.

The panicle inflorescence is 10 to 30 (rarely up to 50) cm long, mostly one-sided and slightly nodding. The side branches go to one or two, rarely up to four from the main axis, are of unequal length and each carry one to four spikelets; they are often contracted and only spread out during flowering. The light green, more or less one-sided spikelets contain 8 to 16 flowers, are 12 to 32 mm long, 2 to 3.5 mm wide and rounded on the back. There are no awns. At maturity the flowers fall individually from the remaining glumes . The mutually unequal glumes are shorter than the spikelets. Both glumes are one- to three-veined, elongated, elliptical, tender-skinned and glabrous. The lower glume is 2 to 3 mm long, the upper 3 to 5 mm. The lemmas are seven-veined with equally prominent nerves, 6 to 7.5 mm long, elongated elliptical, pointed shape, rough, membranous and whitish-transparent above. The palea is two-veined, 6 to 7.5 mm long, oblong-lanceolate, notched at the upper end, the short teeth reach the upper edge of the lemma or protrude above it. The often purple or sometimes yellowish-purple anthers are 2 to 3 mm long. The flowering period extends from May to August, rarely until September.

The caryopsis has an elongated elliptical outline with a length of 2 to 3 mm.

The flooding plume is a hydrophyte and hemicryptophyte . Its vegetative reproduction takes place through long creeping rhizomes and through the rooting prostrate stems. The flooding plume optionally forms floating leaves that flood in the direction of flow.

The flooding plume is widespread in Europe, especially in the west of the continent. Its distribution area extends to Turkmenistan and also includes Morocco. In North America the flood plume was introduced.

In Central Europe , the flooding plume is widespread and occurs from the plains to the mountains. In the Black Forest it rises to altitudes of 1420 meters. In the Allgäu Alps, it rises in the Tyrolean part at the mountain railway station near the Hahnenkamm up to 1730 m above sea level.

It grows in reeds, in stagnant or slowly flowing, shallow waters, muddy ditches, at springs, ponds, ponds, on flat moors, on wet meadows, in alluvial forests and forest swamps. It occurs particularly on cool, oozing wet or shallowly flooded, neutral to acidic soils that are rather poor in lime, which are often boggy, impermeable to water, but dry out in summer. The flooding swath is a light to partial shade plant and a pointer plant for wet and oxygen-poor soil .

In the plant-sociological system, the flooding steam is an association characteristic of the flood steam reed beds (Sparganio-Glycerietum fluitantis) and an association code of the low-growing reed beds (Glycerio-Sparganion). It also occurs in societies of the source corridors of lime-poor locations (Cadamino-Montion), the reed beds (Phragmition australis) and in nutrient-rich wet meadow societies (Calthion).

The fruits used to be collected in Brandenburg and Poland, for example, and processed into "Schwaden grütze " or "Frankfurter grütze ", which was made with milk or butter. They also serve as fish and poultry feed.

The Flooding Swath is a moderately productive grass. It provides quite good, little woody feed that is eaten with pleasure. It has limited grazing rights, but its locations are often breeding grounds for the liver fluke . The contained cyanogenic glycosides are harmless during ensiling .

In ditches, the flood plumes can become an annoying " weed " through overgrowth .

In addition to the sources listed in the individual references, the article is based on the following documents: