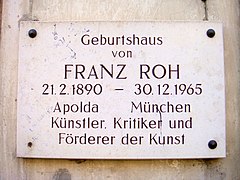 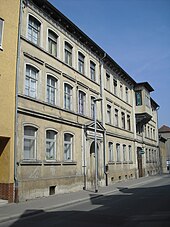 Roh studied philosophy, literature, history and art history in Leipzig , Berlin (with Adolph Goldschmidt ) and in Basel . From 1916 to 1919 he was assistant to Heinrich Wölfflin at the Art History Department of the University of Munich . In 1920 he received his doctorate with Wölfflin with the work Dutch painting of the 17th century , then he received a teaching position for modern painting in Munich. At this time he exhibited his own photo collages for the first time. He wrote reviews for the magazines Cicerone and Das Kunstblatt , after the war for the US-American Neue Zeitung, which appeared in Munich, and for Radio Munich. This work brought him into closer contact with contemporary artists such as George Grosz , Kurt Schwitters , Willi Baumeister and Max Ernst .

In 1925, Roh published the book Post-Expressionism - Magical Realism: Problems of Recent European Painting , which examined the European styles of the post- Expressionist era . With his work, Roh introduced the term magical realism . In 1933, he was for his commitment to modern art which the Nazis as degenerate art titled, several months in Dachau concentration camp in protective custody taken, and he lost his position at the university.

In 1946 he married the art historian Juliane Bartsch, who ran the Mannheimer Kunstverein until 1937 and who, under the name Juliane Roh, was to become one of the most important art writers in post-war Germany. Franz Roh's book The Misunderstood Artist: Studies on the History and Theory of Cultural Misunderstanding , which he began during the Second World War , was published in 1948. In the same year he resumed his teaching position at the newly opened Munich University.

In 1951, Roh became the first president of the newly founded German section of the Association Internationale des Critiques d'Art (AICA), and in 1958 he handed over the chairmanship to Will Grohmann . In 1952, Roh founded the first German Artothek in Berlin , an art rental agency that became a model for many others in Germany. In 1958 his History of German Art from 1900 to the Present was published by Bruckmann in Munich. In 1961 he had his first exhibition of his collages with Otto Stangl , and in 1962 his book Entartete Kunst - Kunstbarbarei im Third Reich was published by Fackelträger, Hanover. A second exhibition of his collages under the title Metamorphoses - Objective Collages showed the Parnass Gallery in Wuppertal in 1963.

The written estate of Franz Rohs is in the German Art Archive of the Germanisches Nationalmuseum in Nuremberg, part of the correspondence between artists and FR in the Getty Center for the History of Art and the Humanities Santa Monica . The photographs came to the Bayerische Staatsgemäldesammlungen / Collection of modern art in the Pinakothek der Moderne as part of the Wilde photo collection . The administrator of the estate is the Munich doctor Richard Hampe.