The Gallscheid Court (also Galgenscheider Court or (after Schöneck Castle ) Herrschaft Schönecken ) was an administrative and judicial district within the Upper Office of Boppard of the Electorate of Trier . It got its name from a parcel of land near Dörth east of Emmelshausen , where the blood court presumably came together.

According to the Trier fire book of 1563 and later records, the Gallscheider court included the following places:

Notes on the number of inhabitants in 1787:

The fire book of 1563 lists places belonging to the court with a special position, which are presumably to be associated with an earlier Reich affiliation: "[...] in the Gallenscheider, and as a sunderous ingericht [...] it is kept particularly free and exempt. Schwall (der Hof), Leiningen, Nairathe (Norath), Pfalzfeldtt, Ober- and Nidergunterßhusen, Liessenfeldtt and Mermonth, Erenberg, Schloß, Hof, Mühle, ein dall (district of Brodenbach (Ehrenburgertal?)), Norterßhusen, Rome (district Castles) ". 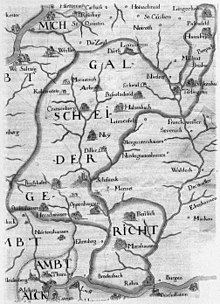 17th century map. Presumably drawn to illustrate the locations of the court

The Gallscheider court office extended from the Rhine-Moselle watershed on the Vorderhunsrück to the Moselle . With the exception of the Rohm district of Burgen and part of Brodenbach on the Moselle , the towns were mainly located on the plateaus between the Ehrbach and Baybach tributaries . The place of execution was, following old maps and modern measuring sheets, named Gallscheid there, near an almost 500 m above sea level. NN lying hill east of Emmelshausen . The office was divided into the 4 parishes of Beulich , Bickenbach, Halsenbach and Herschwiesen .

In 1259, King Wilhelm of Holland pledged the court and bailiwick of Galginscheid from imperial property to Konrad von Schöneck (first mentioned). In 1315 King Ludwig the Bavarian pledged the court to Archbishop Baldwin of Luxembourg . Against the expansion and presumably also the conditions of the Kaiserslauter peace of the Trier bishop, the Schönecker defended themselves unsuccessfully in the Eltz feud and had to recognize the Trier suzerainty in 1354. Johann von Schoeneck wore his rule in 1453 Kurtrier to feud on. In 1508, the male line of Schöneck died out. The office was assigned to the office of Boppard and thus to the Electorate of Trier as a Reich pledge that was never redeemed . Boppard's bailiff became the chief judge representing Trier. The judicial district existed as a Gallscheid court until the French times at the end of the 18th century.

Map from the beginning of the 19th century. First geometric cartography of the region. Place names of the French original partly added later in High German. The almost vertical red line was the Route de Coblentz à Mayence , which the modern Hunsrückhöhenstrasse (B 327) and the Bundesautobahn 61 follow in parts.

The Lords of Schöneck as Reich governed and later as representatives of the Trier Elector administered the judicial district from Schöneck Castle . Elsewhere, Halsenbach is also mentioned as the central location of the court. Judgment on simple criminal matters could also be held in the towns by mayors and lay judges. The place of execution for executions was, following old maps and district names, on a hill east of Emmelshausen .

Blood jurisdiction was then exercised by the executioner of the Electorate of Trier von Wellmich , the lower jurisdiction such as for theft, sorcery and other criminal offenses kept the Schönecks and their successors. The governor, who had to live in the judicial district, should seize the perpetrator and bring him to the castle. The judicial district, however, was larger than the rule and went as far as the Moselle.

In a 500 m high forest in the northern part of the district of Dörth with the field name Gallscheid at the intersection of two long-distance roads that already existed in prehistoric times, there were three large, legendary burial mounds that a farmer excavated in 1851 and uncovered a prince's grave. The court must have met in this "holy" place and, if necessary , must have set up a gallows there.