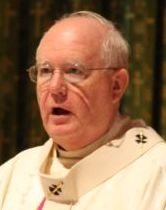 George Niederauer was born as the only child of George and Elaine Niederauer. He attended St. Catherine's Military Academy in Anaheim from 1946 to 1950. In 1954 he graduated from St. Anthony's High School in Long Beach. At St. John Seminary he received his bachelor's degree in philosophy in 1959 and his bachelor's degree in theology from the Catholic University of America in Washington DC in 1962 . In addition, he completed a master's degree in English literature from Loyola University in Los Angeles in 1962 and a PhD in literature from the University of Southern California in 1966 .

On November 3, 1994 Niederauer was appointed Bishop of Salt Lake City , Utah, by Pope John Paul II . He was ordained episcopal on January 25 of the following year by the Archbishop of Los Angeles , Cardinal Roger Michael Mahony . Co- consecrators were the Archbishop of Portland, Oregon , William Joseph Levada , and the Bishop of Boise City , Tod David Brown . He was particularly committed to communication with the various social classes, in particular the Church of Jesus Christ of Latter-day Saints ( Mormonism ) in Utah.

On December 15, 2005 he was welcomed by Pope Benedict XVI. appointed Archbishop of San Francisco, successor to Cardinal William Joseph Levada. The inauguration took place on February 15, 2006. On July 27, 2012 Benedict XVI. the resignation put forward by George Hugh Niederauer for reasons of age. He was chairman of the Social Communications Committee of the United States Bishops' Conference and a member of the Pontifical Council on Social Communications .

Order of Knights of the Holy Sepulcher in Jerusalem

George Hugh Niederauer was a member of the Order of Knights of the Holy Sepulcher in Jerusalem . In 2005 he was named Grand Prior of the USA Northwestern Lieutenancy by John Patrick Foley , Cardinal Grand Master of the Papal Order of Knights.

In 2008 he was also accepted as an honorary conventual chaplain (ad honorem) to the Western Association of the United States in the Order of Malta .