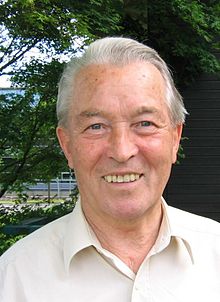 Gerhard Fischbeck (born August 26, 1925 in Wieglitz near Calvörde ) is a German plant cultivation and plant breeding scientist . From 1964 to 1993 he taught at the Technical University of Munich in Weihenstephan .

His main focus was on the characterization of variety-specific elements in the development of grain production in Germany as well as the genetically based expansion of the basics for resistance breeding , especially against powdery mildew in barley and wheat . Through committed interdisciplinary activities in scientific organizations and specialist societies, he played a decisive role in the development of crop research in Germany.

Gerhard Fischbeck, son of a (elementary) school teacher, attended secondary schools in Gardelegen and Feldafing from 1936 to 1943 . After military service and captivity , he began a two-year agricultural apprenticeship in Etzenricht (Upper Palatinate) in 1945 . At the same time, he obtained the university entrance qualification in a special course for combatants . From 1947 he studied agriculture at the Technical University of Munich in Weihenstephan . In 1950 he passed the examination to become a qualified farmer with distinction. This was followed by a one-year supplementary study in the subjects of plant breeding and plant pathology at the University of Minnesota (USA). Here earned the academic title Master of Science in 1951 .

After returning from the USA, Fischbeck worked as a research assistant in the Institute for Arable and Crop Production at the Technical University of Munich in Weihenstephan, which was headed by Gustav Aufhammer . In 1954, under the aegis of Aufhammer, he was promoted to Dr. agr. is doing his doctorate with a dissertation on environmental influences on growth, yield and quality of brewing barley varieties . In the following years Fischbeck worked as a research assistant, temporarily as a curator , at this institute.

In 1969, Fischbeck accepted a call from the Technical University of Munich and, as a full professor and successor to his teacher Gustav Aufhammer at the Faculty of Agriculture and Horticulture in Weihenstephan, took over the Chair of Plant Cultivation and Plant Breeding, which was renamed at the same time. From 1972 to 1974 he held the office of dean of this faculty and from 1976 to 1979 he was the representative of the President of the Technical University of Munich for the Weihenstephan location. In 1993 he retired .

Fischbeck's scientific life's work is characterized by diversity and interdisciplinarity . The leitmotif of his thoughts and actions was the knowledge, research and teaching of the agricultural science-oriented plant disciplines (plant cultivation, plant breeding, phytomedicine ) to bring together more strongly than before in a comprehensive integrated subject of crop research .

The interactions between cultivation methods and cultivar performance in cereals in terms of their importance for yield and quality, which Fischbeck dealt with early on in his dissertation (1954) and his habilitation thesis (1961), were for a long time one of his main research interests. Furthermore, he devoted himself to methodical questions on the quantification of characteristics of the brewing quality in barley and the baking quality in wheat, as well as opening up new perspectives for the use of gene reserves for plant breeding.

Fischbeck's experiments on the genetic basis of resistance breeding developed into a major focus of work, especially using the example of the harmful fungus powdery mildew , triggered by studies on the genetic differentiation and distribution of powdery mildew resistance in natural populations of wild barley in Israel. As early as 1975 he was working on damage thresholds in case of powdery mildew. This research area merged seamlessly into the area of genomics . Genomic research began at his chair with the development of the first molecular gene map for barley. Under his aegis, new varieties, equipped with previously unused genes for powdery mildew resistance, were prepared for use in breeding.

The first field trials on the question of the biological safety of genetically modified plants ( maize and rape ) have been carried out under Fischbeck's direction since 1993 at the Rogenstein test station belonging to the Technical University of Munich. Fischbeck is one of the proponents of the use of green genetic engineering in agriculture.

The list of publications fish Becks approx includes 250 publications, including several review articles in textbooks and handbooks . His most important book publication is the book Getreide , which he wrote together with Gustav Aufhammer in 1973 . Production technology and recycling , a classic in German-language specialist literature on grain cultivation. For over three decades, the textbook Special Plant Cultivation (first edition 1975) , which was developed together with specialist colleagues, was required reading for students of agricultural sciences in the Federal Republic of Germany. Fischbeck is a co-author of the practice-oriented book Getreidebau aktuell , of which seven editions were published between 1975 and 1983. Finally, his contribution Biology and Physiological Basics of Plant Production, published in the Handbuch des Pflanzenbau (Volume 1, 1997), deserves special mention .

As a university professor, Fischbeck led 69 doctoral students (six of them in Bonn) to doctorate; four of his students completed their habilitation.

Fischbeck has the rare ability to stimulate interdisciplinary scientific discussions, to get to the heart of the matter through his balanced judgment and to often point out simple solutions to difficult problems. Like hardly any other specialist colleague from the agricultural sector, he was therefore a valued member of committees, commissions and specialist societies. Many of these scientific organizations elected him their chairman. His main areas of activity were: