The poison gas attack on Halabja was an attack by the Iraqi air force to the mainly Kurdish inhabited Iraqi city of Halabja in today's autonomous region of Kurdistan . The attack, which took place on March 16, 1988 towards the end of the First Gulf War , killed between 3,200 and 5,000 people.

As UNMOVIC found in its 2006 report, Iraq's chemical weapons program had produced a total of 3859 tons of chemical warfare agents by 1991, of which 3315 tons were ammunitioned. With this 130,000 explosive devices could be produced; By 1988 over 101,000 explosive devices (aerial bombs, artillery ammunition and missile warheads) had been fired. Saddam Hussein used chemical warfare agents in the First Gulf War (1980–1988) not only against Iran, but also against the Kurds living in northern Iraq, especially in 1988 during the so-called Anfal Operation .

It is estimated that around 60% of Iraq's total poison gas arsenal was produced in plants that were partly illegally supplied and installed by companies from Germany. Between February 1983 and March 1985, German companies supplied equipment for the production of poison gases, which, according to Iraqis, began in 1986. The Society for Threatened Peoples threw ago before the massacre in Halabja more German than 40 European companies to be responsible for the crimes committed with poison gas war crimes in Iraq, as they are in the construction of gas plants, especially in Samarra had participated.

History of the attack

Halabja was an important center of the Kurdish resistance in the attempts at autonomy against the central government in Baghdad . On May 14, 1987 there were anti-government demonstrations in Halabja. Ali Hasan al-Majid , then commander for the northern regions of Iraq, then executed civilians who were injured in the demonstrations and ordered that their homes be torn down with tanks and bulldozers. There were also numerous arrests and more than 100 people " disappeared ".

Since April 1987, the Iraqi air force has carried out poison gas attacks against villages in the Kurdish mountainous region. The Society for Threatened Peoples (STP) kept the German-speaking media informed about this and reported a total of 87 poison gas attacks on Kurdish villages even before the attack on Halabja.

On March 15, 1988, Kurdish rebels of the Patriotic Union of Kurdistan, together with regular units of the Iranian army , captured the Iraqi city of Halabja, which then had 70,000 inhabitants, in Operation Dawn 10 (Valfajr 10) .

According to eyewitnesses, around 11 a.m. on March 16, Iraqi Air Force fighter jets flew over the city. It should have been up to 20 aircraft, including MiGs and Mirages . Then you could see columns of smoke rising, first white, then black and finally yellow. A helicopter was also involved in the attack, the crew of which took preparatory photographs and later measured the wind with the help of scraps of paper dropped.

The type of warfare agent used was later described as mustard gas , sarin , tabun and a warfare agent presumably based on cyanide . The exact composition of the toxins used is still unknown today.

A surviving resident described what had happened in retrospect in 2008:

“It was a beautiful spring day. Just before 11 a.m. […] artillery shells exploded in Halabja and planes began to drop bombs on the city, especially in the north of the city. We ran into our basement. At 2:00 p.m., when the bombing subsided, I cautiously walked from the basement to the kitchen and brought my family something to eat. When the bombing stopped, […] I heard a long, strange noise that sounded like a bomb explosion. A man came running into our house and shouted, 'Gas! Gas!' We ran to our car, got in, and closed the car windows. I think we drove over the bodies of innocent victims. I saw people lying on the floor vomiting a greenish liquid while others became hysterical and began to laugh out loud before falling motionless to the floor. I later smelled an apple and passed out. When I woke up, hundreds of corpses were scattered around me. I then took refuge in a nearby cellar. There was an ugly smell all around this area. It smelled like rotting garbage at first, but then came a sweet smell similar to the smell of apples. Then it smelled more like eggs. [...]

When people shout the words 'gas' and 'poison' and you hear how these calls spread among people, horror spreads, especially among children and women. Your loved ones, your friends, you watch them go and then fall like leaves to the ground. It's indescribable. Birds fell from their nests. Then other animals, then people. It was total annihilation. Those who could walk left the city on foot. Anyone who had a car continued to do so. But those who had too many children to carry on their shoulders stayed in the city and fell victim to the gas. " 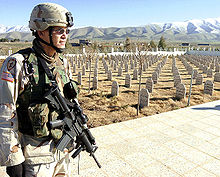 American soldier in front of the graves of the victims

According to the BBC, 3,200 to 5,000 people died as a result of the attack . According to Human Rights Watch , the death toll is certainly higher than 3,200 because that was the known number of deaths obtained from systematic interviews with survivors. Most reports fall back on Kurdish and Iranian sources and name the number of victims between 4,000 (for example Dilip Hiro) and 7,000. Almost all of the victims were civilians, and according to some reports up to 75% of the victims were women and children.

Some victims died quickly. An Iranian photojournalist described it as follows: "Life had ended like a film that suddenly stops at a picture." For example, he came into a kitchen and saw the body of a woman who was still holding the knife with the she had chopped up a carrot. Many victims were suffocated in agony. A Turkish photographer came to Halabja 24 hours after the attack and reported: “No birds, no animals. There was nothing living to be seen. The streets were covered with corpses. I saw babies in their dead mother's arms. I saw children who had hugged their father in agony. "

Some were able to escape death by breathing through damp cloths and escaping into the mountainous terrain in the area.

Around 7,000 to 10,000 people suffered injuries and some permanent damage to their health. The mustard gas burned the skin, eyes and lungs. There was also genetic damage and thus an increase in cancer and malformations in newborns. Further damage was caused by the neurotoxins. Many who survived initially died of serious illnesses over the next few years.

After 10 years, the number of people with Down syndrome had doubled and the rate of leukemia tripled. There was an even greater increase in cardiac failure and congenital heart defects . Miscarriages were more than 10 times more common than in a neighboring area that was not affected by the poison gas attack. Damage to the bones led to physical disabilities, and some victims could no longer walk without aids. Children of mothers exposed to the attack suffered increased damage and deformities in the teeth and oral tissue.

Even 30 years after the poison gas attack, reports from Halabja are that many victims suffer from the long-term effects, including skin cancer , eye diseases, breathing problems, infertility , deformities, nerve damage and psychological problems. The head of the local health department complained that there was still a shortage of drugs and specialized doctors for eye diseases, for example.

The attack also resulted in permanent soil and water contamination and a loss of flora in the affected area. Many residents left Halabja permanently.

Among the first photographers to document the event were the later Pulitzer Prize winner Kaveh Golestan, who had already seen the attack by fighter planes from a distance, and the Turkish photographer Ramazan Öztürk. Iranian authorities flew Western journalists to Halabja by helicopter on March 21, 1988 to inform the world public. The journalists filmed and took photos. Some of the video footage was used in a 35-minute film about the poison gas attack that United Nations officials showed journalists on March 30th in Iran.

Shortly after the attack, a conviction by the UN Security Council failed due to the US veto and the abstentions from Great Britain, France, Australia and Denmark. It was only on September 9, 1988 that the US government condemned the poison gas attack on Halabja as a "heinous and unjustifiable act" by Iraq against the Kurdish population.

The comparable poison gas attack on Sardasht , an Iranian city, which took place 9 months before the attack on Halabja, only found media coverage as a result of the exposure of the poison gas attack on Halabja. Another 40 attacks with poison gas on Kurdish towns and cities between February and September 1988, such as north of Sulaimaniyya (February 29, 1988) and near Sardasht and Marivan (March 22, 1988, 31 dead, 450 injured), received less media coverage.

After five years of investigative work, a trial began in April 1992 at the Darmstadt Regional Court against ten German managers whose companies had participated in the construction of the Iraqi plants for the production of poison gas. Proceedings had been opened against twelve other representatives of these companies without being charged. Of the ten defendants, only three were sentenced to less than two years' suspended prison sentence . The main reason for the low fines was the dual-use problem: According to the expert report, the Iraqi chemical plants were suitable for the production of pesticides, so that it could not be clearly demonstrated that the intention to produce toxic gases had to have been clear to all involved . Three of the defendants were acquitted. The remaining proceedings were closed, mainly due to the statute of limitations .

The poison gas attack on Halabja was one of the charges in the trial of Saddam Hussein , which began in October 2005 and ended in December 2006 with the confirmation of the previous death sentence. Saddam Hussein was executed by hanging on December 30, 2006 .

In December 2005, the Dutchman Frans van Anraat was sentenced to 15 years imprisonment by a court in The Hague for delivering thousands of tons of chemicals for the production of poison gas to Iraq. The Dutch court classified the poison gas attack on Halabja as genocide and a war crime . In May 2007 the Court of Appeal in The Hague increased the sentence to 17 years in prison.

Against Ali Hassan al-Majid , better known as "Chemical Ali", four death sentences were spoken in total, of which the last 17 January 2010 because of his responsibility for the poison gas attack on Halabja. The judgment was supported by an unusual piece of evidence. A tape found in 1991 in the Kurdish town of Sulaimaniyya can be heard as al-Majid said with reference to Halabja: “I will kill them all with chemical weapons. Who should say something against it? The international community? I don't give a shit about the international community and those who listen to it. I'm not going to attack them with the chemical stuff for just one day, I'll keep doing it for 15 days. ”The death sentence was carried out on January 25, 2010 by hanging.