Grids are used in science and technology for surveying , modeling and numerical calculations (see grid model ).

Grids are divided into different categories based on their topology and geometry. A fundamental distinction is made between structured and unstructured grids.

Example of a structured (curved) grid.

Example of a rectangular grid. 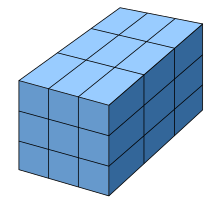 Example of a uniform grid.

Example of a Cartesian grid.

In the case of curved grids (English curvilinear grids ), the grid lines are given by parameterized curves. However, the term is rather uncommon. One then speaks simply of structured grids.

Right-angled grids (English rectilinear grids ) divide the space completely into axially parallel areas that do not have to be the same size. In three-dimensional space, cuboids of different or the same size are created.

Example of an unstructured grid.

Unstructured grids (English unstructured grids ) have no set topology and no uniform grid cell geometry. Unstructured grids are mostly the result of an adaptation process. Also known are grids made of complex cells, so-called polyhedral grids. The cell structure here is similar to that of soap foam.

Unstructured grids can be used very flexibly and can also be easily generated automatically. However, data management is more complex than with structured grids. On the one hand, the grid points are not arranged in a regular pattern as is the case with structured grids, but have to be saved individually. On the other hand, it is not clear from the start which cells are neighboring to a particular grid cell. This neighborhood information must either be stored explicitly when the grid is generated or it must be calculated in a complex manner at runtime. Unstructured grids therefore generally require a multiple of the memory requirements of structured grids and generally cause a higher computational effort.

As mesh generation or Meshing refers to a group of procedures in computer graphics , as well as the simulation of the physical properties of solids and fluids; In this process, a given surface or a given volume of space is approximated ( approximated ) by a number of smaller, mostly very simple elements . The resulting grid is a simplified description of the surface or the body, which then z. B. can be used for further calculations, for example by means of the finite element method (FEM).

In the case of two-dimensional surfaces, triangular or quadrangular elements are most often used to generate the grid , while three-dimensional bodies usually use tetrahedra or cuboids .

The generation of a grid of triangular elements is also called triangulation (or triangulation ) referred to (as well as the resulting triangular lattice), the generation of a grid of square elements is also Paving . If the number of outer edges of a surface is fixed and the number is odd, then pure square paving is not possible (at least one element remains with an odd number of corners, e.g. a triangle).

In trigonometry and elementary geometry, the division of a surface into triangles is referred to as a triangular grid , triangular network or triangulation . In terms of graph theory , triangular grids are of the type “undirected graphs without multiple edges”, whose subgraphs are “ circles with three nodes ” (and correspondingly three edges ). The generalization of triangle meshes are polygon meshes .

Example of the application of an adaptive grid to calculate the air flow around an aircraft wing.

A distinction is also made between adaptive and non-adaptive discretizations.

Non-adaptive gratings have the same resolution everywhere. In the case of small geometric structures or areas with strong curves, acute angles or differently defined material parameters, a coarse grid with large grid cells is no longer sufficient to discretize such problem areas with sufficient accuracy. A global refinement of the grid is mostly not useful because of the associated increased storage and computing time.

Here, the method accesses the adaptive mesh generation (English adaptive meshing ), which, when large errors are expected to select the fine grid. This is done either through a priori knowledge of the problem under consideration or through methods that use given error estimates to dynamically refine where the error is currently large. The latter is particularly important in the case of transient problems, i.e. if the problematic areas change their position over time.

Another method for discretizing critical areas is sub-grid technology .

In numerical mathematics, a computational grid is a discrete decomposition of the space on which a partial differential equation is to be solved. The term is not used for a temporal discretization . The intersections of two grid lines are called nodes, the cells either as cells, in finite element methods also as elements and in finite volume methods as volumes. The grid can be spatially fixed or move over time or be adapted in the course of the calculation.

At the edges of the area, boundary conditions must be specified.

Computational grids do not have to be one-dimensional. With three-dimensional grids, very large numbers of cells are quickly reached. A simple right-angled grid that resolves only 100 cells on one edge already has 1 million cells in the third dimension .

On modern PCs with 2 GB main memory, approx. 1.5–5 million cells can be calculated today, depending on the software system. If larger resolutions are required, the calculation must be carried out on mainframes or computer networks .