Gustav Adolf of yours 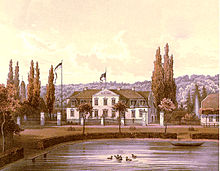 Gustav Adolf was the son of the Kommerzienrat Konrad Otto Deines (1824-1886) and his wife Friederike Karoline, née Textor (1827-1885). His father owned an art and commercial gardening business.

After attending the High State School in Hanau, he joined the field artillery regiment "von Holtzendorff" (1st Rheinisches) No. 8 in Saarlouis on March 29, 1870 as a three-year-old volunteer and took part in the Franco-German War from 1870 to 1871 . Here he took part in the fighting at Gravelotte , Beaumont , the Hallue and the siege of Metz . Promoted to second lieutenant on March 1, 1872 , he studied at the United Artillery and Engineering School from 1877 to 1880 and served as a staff officer in the General Staff in Potsdam from 1881 , where he was temporarily head of the "Foreign Fortresses West" department.

Thyes was from 1894 to 1896 as major in command of the Guard Foot Artillery Regiment in Spandau . From 1901 to 1903 he was chief of the 4th department “Foreign Fortresses West” in the General Staff. At the end of January 1906, Deines was appointed senior quartermaster in the great general staff and in this position was promoted to lieutenant general in mid-October 1906 . On the occasion of the festival in January 1909, Deines received the star for the Order of the Red Eagle, 2nd class with oak leaves. By the very highest cabinet order , Deines was elevated to the hereditary Prussian nobility on October 8, 1910 at Gut Cadinen with a diploma from October 18, 1910 in Potsdam ( Neues Palais ) . With the award of the Order of the Crown, First Class, he was put up for disposal on November 22, 1910 with the character of General of the Artillery with the statutory pension .

Yours was considered a specialist in fortress warfare and a creator of heavy artillery. He fundamentally reformed the artillery from the fortress artillery to the artillery of the field army and was significantly involved in the service regulation Struggle for fortresses .

Like his great patron, General Alfred von Schlieffen , in his final years he had warned Kaiser Wilhelm II and the General Staff of the strength of the French fortresses and predicted the actual course of the First World War , which broke out a few months after his death , in which its creation, the gravity Artillery , should play a crucial role.

He was considered a great connoisseur of the works of Goethe , to whom he was distantly related on his mother's side, and was already working on his dissertation on the poet's work when he suddenly and unexpectedly died of a heart attack in his house in Dahlem. He was buried in the Halensee cemetery near Berlin.

Deines is regularly confused with General of the Cavalry Adolf von Deines (1845–1911), who was commanding general of the VIII Army Corps in Koblenz from 1903 to 1906 .

After his death, the Deinesstraße in the area of ​​the barracks in Spandau was named after him, but before the beginning of the Second World War , military installations of the enlarged Wehrmacht were built over it. Today the Deines Bruchmüller barracks are still in Lahnstein .