The Hohe Landesschule (abbreviation: HOLA ) is a teaching institution founded in Hanau in 1607 and today a high school with around 1,440 students.

As a result of the plague in 1605-1607, the German school in Hanau was closed. Based on the example of the High School in Herborn , Count Philipp Ludwig II of Hanau-Münzenberg founded the High School in Hanau on July 18, 1607 as a grammar school illustrious . This meant that the teaching content in the upper classes approximated that of the university, i.e. included subjects such as law and theology. In terms of content, the school was shaped by the Reformed faith . From the 16th century to the first quarter of the 19th century, around half of the Reformed pastors for the County of Hanau-Münzenberg and the neighboring County of Isenburg were trained here.

In Hanau, too, it was not possible - as in Herborn or Danzig  - to develop the institution into a university . It existed until the Napoleonic era as an illustrious grammar school. In the Grand Duchy of Frankfurt , the reformed High State School was merged with the Lutheran grammar school in 1812 . As a cross-denominational high school, it was intended to be a model school for the Grand Duchy. Johannes Schulze became the founding director of the merged “ Simultanschule ” .

Today the school exists as a high school in the city of Hanau. 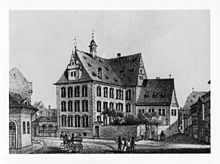 The foundation stone for the first school building, which was designed by the builder Jacob Thomann from the Electoral Palatinate and builder Jacob Stupan, was laid on April 5, 1612. The construction was delayed by the untimely death of Philipp Ludwig II and later by the Thirty Years War , so that the building was not completed until February 21, 1665 under the government of Count Friedrich Casimir (1641 / 1642–1685) by master builder August Rumpff could be inaugurated. Since the establishment of the building dragged on until August 18, 1680, a second inauguration ceremony was held. It was located on today's Freiheitsplatz , roughly where the trade union building stands today.

The building was three-story and made of rubble stone . Each floor had a central aisle with five or six classrooms. There was an auditorium on the first floor . The building was accessed via two stairwells on the portal front of the building. The only decoration on the building was a Renaissance portal from 1664 with the alliance coat of arms of Count Friedrich Casimir and his wife, Countess Sibylle Christine von Anhalt-Dessau . The portal is still preserved today and set up on the site of today's Hola. 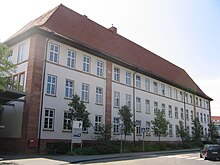 Old building of the high school at the second location from 1923/25, today: Psychiatry of the municipal clinic

As a replacement, a building was erected on today's Julius-Leber-Straße based on a design by Albert Tuczek in 1923–1925, largely as a simple functional building with a few eclectic- neo-Egyptian- applications . After the damage from the Second World War was repaired, a wing was added at right angles in the 1950s, which also included the existing gym, and in the 1960s an extension with rooms for the natural science subjects was added in the north. Today the ensemble serves as the psychiatry of the Hanau City Clinics.

The third location of the High State School was a new building on Alten Rückinger Weg . This was available in 1978. The entrance gate of the first building was preserved and was placed on the current school premises as a solitary structure.

The school has had its own cafeteria since March 2007 and an additional lower level extension since August. Renewed scientific rooms were completed in autumn 2010.

In the spring of 2017, the existing “green classroom” outdoors was supplemented by two more such classrooms. In addition, further campus renovations were implemented, including a. a Japanese garden and a new football and basketball field.

In addition to the curriculum, the school offers other opportunities to participate in school life. Elective courses are offered, such as the theater group, the Japan group and other working groups in the natural sciences, music and sport (e.g. basketball, soccer, rowing, chess). In 2017 the school received certification as a MINT school, and in 2019 as a digital school.

Authors' readings and writing workshops take place in the school at regular intervals. For this purpose the school v. a. the poet and bestselling author Safiye Can win over. Safiye Can has been a school poet at the High State School since 2013. Furthermore, the school regularly takes part in numerous competitions and projects in all departments. This includes B. MUN-SH , youth research or youth debates .