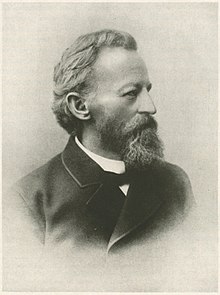 Vogt was born as the youngest of four sons of the doctor and director of the medical clinic at Inselspital Bern, Philipp Friedrich Wilhelm. As a supporter of liberal ideas, he avoided political persecution in the Grand Duchy of Hesse by accepting the appointment to the newly founded, liberal University of Bern, where he taught as a full professor of internal medicine from 1834 until his death . After attending schools in Bern, Gustav Vogt completed a law degree at the University of Bern , passed the advocacy examination in 1853 and then opened a law practice. In 1855 he completed his habilitation at the University of Bern and taught criminal, natural and federal law.

From 1856 to 1869 he was district procurator for the Bernese plateau . His ideas were included in the Bernese Poor Law of 1857, which was written by his friend Carl Schenk. In 1860 a part of his handbook of Swiss federal law appeared , but remained unfinished after Vogt was appointed director of the Federal Statistical Bureau (today the Federal Statistical Office ) in the same year .

From 1862 Vogt was a full professor of constitutional law in Bern and campaigned for direct democracy , constitutional jurisdiction based on the North American model and the international peace movement . In 1862 he represented Switzerland at the World Exhibition in London . In 1869/1870 he was rector of the University of Bern. In 1870, as a proponent of direct democratic development, he received the chair for democratic constitutional law in Zurich, which had been created after the upheaval. From 1876 to 1878 he was rector of the University of Zurich. He was considered the actual creator of federal state law in the spirit of 1848 liberalism .

Vogt acted several times as legal advisor to the Gotthard Railway and represented the company by name in the legal disputes with Louis Favre (from 1876).

Vogt had been in his time at the Berner Berner Zeitung of Jakob Stämpfli (not to be confused with the much later founded and still existing Berner Zeitung ) cooperated. From 1868 to 1869 he worked on the magazine The United States of Europe . From 1864 to 1870 he was editor of the magazine of the Bernese Lawyers' Association .

In 1874, Vogt began working for the Neue Zürcher Zeitung (NZZ) as a part-time acting critic, then became an economist and editor of an editorial; but the struggle of his predecessor Gottwalt Niederer against the factory law moved him to temporarily distance himself from the NZZ as an author. The board of directors had wanted Vogt to be editor-in-chief as early as 1875 and 1877, after the resignations of Hans Weber and Eugen Huber , but Vogt initially aspired to become the rector's office of the university and received it in 1876. When a successor to the provisionally appointed Gottwalt Niederer was sought, the committee asked the law professor again, and this despite political concerns: Vogt represented the Democrats in the cantonal council and was mainly on the left of the shareholders on socio-political issues. As a precaution, Vogt had an "editorial program" drafted before he took up work as editor-in-chief. There Vogt emphasized that the NZZ was not committed to a party, but generally to liberal endeavors. In 1878 he was finally appointed editor-in-chief of the NZZ and remained so until 1885, with a reduced teaching assignment. He had previously left the Democratic Party without joining the NZZ-related Liberal Party.

As editor-in-chief, Vogt was often offensive; in spite of all the necessary adherence to principles, "he lacked the certain suppleness that would sometimes be necessary to wind through all the many cliffs of politics". There were serious arguments between the “renegade” Vogt and the Democrats, especially over banking and railroad issues and the Kulturkampf, in which he fought both the state church arguments and the ultramontane in the name of religious freedom . In the opinion of the board of directors, one of the reasons the paper did not get out of the red was because Vogt neglected cantonal politics (like his predecessors) because of such disputes. Vogt himself announced the fall in January 1883, but then extended the contract for another three years, during which he was to build up the young Walter Bissegger as his successor. Persistent differences with his own shareholders ultimately led to Vogt's resignation in the fall of 1885. He withdrew to his professorship again, but continued to write articles primarily for the features section. In March 1888, however, he fell out with his successors over the increasingly German-friendly course of the paper and finally stopped working.

The historian and political scientist Erich Gruner described the period from 1872 to 1885 of the four NZZ editors-in-chief Hans Weber , Eugen Huber , Gottwalt Niederer and Gustav Vogt as "an outright stormy year for the NZZ" and as one "filled with human smallness, ill will, envy, and narrow-mindedness History "in an atmosphere full of hatred and base instincts." Leo Weisz presented (in his book Die Neue Zürcher Zeitung on the way to the liberal location 1872–1885 ) “the central figure Gustav Vogt in all his brutality, vendor and wind vane”.

Vogt had been married to Lina Rosina Follen since 1854. His brothers were the scientist and democratic politician Carl Vogt (1817–1895), the lawyer and Swiss legation attaché Emil Vogt (1820–1883) and the doctor and social reformer Adolf Vogt (1823–1907). He was the only one of the four brothers who spoke Swiss German ( Bern German ). In November 1847 he took part in the Sonderbund War. His motto was Victrix causa deis placuit, sed victa Catoni ("The victorious cause pleased the gods, but the defeated thing pleased Cato"). In his last years he lived very withdrawn.

Editor-in-chief of the Neue Zürcher Zeitung