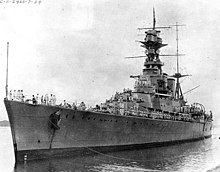 The HMS Hood ( ship identification : 51 ) was a battle cruiser of the Royal Navy . It was built during the First World War , but was no longer used in this. In the interwar period, she was the largest warship in the world and the flagship of the British fleet for two decades. During the Second World War , she was sunk by the German battleship Bismarck in 1941 during a battle in the Denmark Strait . The ship was named after Admiral Samuel Hood , the 1st Viscount Hood (1724-1816).

The Hood was one of four Admiral-class ships whose construction began in mid-1916. The Hood , however, was the only ship of this class that was completed. The work on the others was discontinued because the German capital ships against which this class of ship was to be placed were no longer built after the end of the war.

Construction of the Hood began on September 1, 1916 at the John Brown & Company shipyard in Clydebank, Scotland. After the Grand Fleet lost three battle cruisers in the Battle of the Skagerrak , 5,000 tons of additional armor were included in the design. The 38.1 cm L / 42 caliber, with which the Hood itself was equipped, was chosen as a measure of the thickness of the armor . In theory, this armor made the ship a real battleship . The Hood was equipped with the most powerful propulsion system in British warship construction at the time. Twenty-four Yarrow oil-fired water-tube boilers supplied the steam for four Brown Curtis geared turbine sets, which were distributed across three engine rooms. Each turbine set consisted of a high-pressure and a low-pressure part as well as a marching turbine flanged to the high-pressure part. Together, the four turbine sets delivered 144,000 hp (106 MW) and moved the four screws at a maximum of 210 revolutions per minute. The electrical energy of 220 volts DC required on board was generated by eight generators of 175 kW each (two of which are driven by diesel engines, two by steam turbines and four by piston steam engines).

However, the ship was designed too hastily and its construction, especially with regard to armor, was therefore flawed. Only the front powder magazines were relocated under the grenade chambers, although it was known that exploding cordite propellants had destroyed the British battlecruisers in the Battle of the Skagerrak . The combination of top and side armor could not provide continuous protection from projectiles if they hit from several directions. The deck armor had a critical weakness: it was spread over three decks and designed to detonate impacting projectiles on the outside of it, the effect of which was to be absorbed by the armor. The development of projectiles with delay fuses at the end of the First World War made this concept not only useless, but downright dangerous. In addition, the additions made the Hood much heavier than originally designed, so there were structural weaknesses. Therefore, towards the end of the war, serious consideration was given to scrapping the half-finished hull and building a completely new ship. However, the economic conditions of the post-war period did not allow this.

The construction of the intended sister ships Anson , Howe and Rodney was canceled in March 1917. There were two reasons for this: First of all, the German ships for which this class was intended as an answer were never completed. The errors in the armor and design had also become obvious, and repeated changes to the sister ships could not fix them. Instead, a series of studies was started that eventually led to the development of the N3 and G3 battleships. Nevertheless, work on the Hood continued.

The Hood was baptized on August 22, 1918 by the widow of Admiral Sir Horace Hood , who died in the Battle of the Skagerrak . He was also a distant relative of the ship's namesake. After equipping and testing it, it was put into service on May 15, 1920. The Hood became the flagship of the Battlecruiser Squadron of the British Atlantic Fleet under the command of Captain Wilfred Tomkinson . It had cost £ 6.25 million to build.

The Hood in 1924 off Honolulu , view from port aft 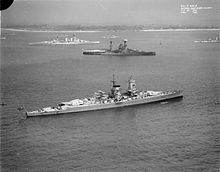 Future enemies peacefully united: the Hood in the background, the Resolution in the middle , and the German Admiral Graf Spee in the foreground. They anchor on the occasion of the coronation of King George VI. in Portsmouth in May 1937 .

In the interwar years, the Hood was the largest warship in the world, at a time when the British public felt very attached to the Navy. Her name and specifications were well known, and as the Mighty Hood she was the figurehead of the Royal Navy. Because of its popularity, it was often used to "fly the flag" when visiting other countries. In particular, she took part in a circumnavigation of the world between November 1923 and September 1924 together with the Repulse and other smaller ships. On this occasion the Hood was visited by about 750,000 people. In 1931 the crew took part in the Invergordon mutiny .

Around 1930 the Hood was extensively re-equipped and the deck armor on the fore was improved. The reinforcement of the stern was not carried out due to time constraints, as the ship had been traveling overseas for months for representation purposes. The battlecruiser was to be modernized in 1941 by a total renovation similar to that of the battle cruiser Renown . However, the outbreak of war made it impossible to withdraw her from the front, so she never received the planned major overhaul. Towards the end of 1936 the Hood was assigned to the Mediterranean Fleet.

In the interwar period, the Hood collided with the Renown off the Spanish coast near Arousa on January 23, 1935, in which a screw on the Hood was damaged. Fragments of the screw were engraved with the incident and are now owned by the Hood Association .

From June 1939 she strengthened the battle cruiser squadron of the Home Fleet in Scapa Flow . After the outbreak of war in September 1939, it was mainly used to patrol near Iceland and the Faroe Islands to protect convoys and prevent German pirates from breaking into the Atlantic.

From September 25th to 26th, she met, as part of a naval formation, with the battleships Nelson and Rodney , the battle cruiser Renown , the aircraft carrier Ark Royal , the cruisers Norfolk , Newcastle and Edinburgh and the destroyers of the 4th and 8th Z flotilla in the middle North Sea. Four Junkers Ju 88s of the I. Group of Kampfgeschwader 30 attacked the unit and scored a ricochet on the Hood and a close hit at the Ark Royal .

On November 25, 1939, she ran together with the French Dunkerque for joint escort duties in the Atlantic.

In July 1940 she took part as the flagship of Force H in the destruction of the French fleet ( Operation Catapult ) at Mers-el-Kébir . In August she returned to the battle cruiser squadron and resumed patrols against German trade troublemakers. Another overhaul followed until mid-March 1941. Flag captain (captain of an admiralty flagship ) Ralph Kerr under Vice Admiral Lancelot Holland was in command.

Battle in the Denmark Strait

At the end of March 1941, the Hood and the battleship Prince of Wales were ordered to the North Atlantic to secure convoy . At the end of May, both ships headed northwest for the sea area south of Iceland to intercept the German warships approaching from the northeast, the battleship Bismarck and the heavy cruiser Prinz Eugen , to protect the convoys south of Iceland from the United States.

Explosion of the Hood (Photo from the Federal Archives)

On May 24, 1941, the Hood was sunk in the battle in Denmark Street (see also: Operation Rhine Exercise ). The Bismarck managed a devastating hit after only six minutes of firefight. The fifth salvo from all four towers hit the rear main ammunition chamber of the Hood due to insufficient armor , tore the ship apart and triggered another explosion in the front ammunition chamber below the tower "B". Fore and aft rose out of the water, broke apart near the aft mast and sank in the icy waters in two minutes. Of the 1,418 man crew, only three could be saved: the Englishmen Edward "Ted" Briggs (1923–2008) and Robert Ernest Tilburn (1921–1995) and the Scot William John Dundas (1923–1965). Until they were rescued by the British destroyer HMS Electra , they had to endure two hours on life rafts, already dangerously hypothermic. The dramatic loss of such a well-known symbol of the British fleet had a major impact on the British public. Some later referred to this as the most shocking news of World War II.

On July 19, 2001, the wreck of the ship was found by a team led by David Mearns at a depth of 2804 meters. It turned out that the ship had broken into three large parts: the bow section, the remains of the midship and the stern. Until then, it was unclear whether Commander Ralph Kerr had already steered the hood to port in order to also deploy the aft turrets and bring the endangered aft section into a position more protected from enemy hits. The recordings clearly showed the rudder blade, which was already pointing to port - the ship had been sunk when changing course.

The remains of the Hood were declared by the British government through the Protection of Military Remains Act as a "Protected Place" to a war cemetery . "Ted" Briggs personally placed a bronze plaque of honor from the search ship by releasing the robotic arm on the wreck, which was donated by the HMS Hood Association (HMS Hood Society).

On August 7, 2015, the ship's bell was lifted by a team led by Paul Allen . A first attempt at recovery failed in 2012 due to poor weather conditions and technical difficulties. The well-preserved bell has been restored and is on display in the National Museum of the Royal Navy in Portsmouth .