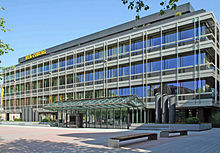 The HUK-Coburg liability support fund of motor vehicle officials in Germany a. G. in Coburg ( spelling HUK-COBURG ) is a mutual insurance association based in Coburg , Bavaria.

The company was founded on September 3, 1933 as a liability support fund for motor vehicle officials in Germany. V., based in Erfurt, was founded by members of the Pastors' Association (PKV) and the Association of German Teachers .

It is the largest self-help organization for the public sector. The group of companies includes five property and casualty insurers, two life insurers and two private health insurers as well as a service company.

Klaus-Jürgen Heitmann has been the Board Spokesman since August 1, 2017 . Heinrich R. Schradin has been Chairman of the Supervisory Board since July 2014.

On September 3, 1933, in the Hotel Kaiserin Augusta in Weimar, the Liability Assistance Fund for Kraftfahrender Officter Deutschlands e. V. based in Erfurt was founded by members of the Pastors' Association (PKV) and the Association of German Teachers . Among the founding members were the Protestant pastor Karl-August Fritsch , the teacher Wilhelm Russ and the insurance salesman Paul Brendel . In 1937 it was converted into a mutual insurance association (VVaG). In the same year, the license to operate the motor vehicle liability insurance was granted and the company in the liability support fund of motor vehicle officials in Germany a. G., Erfurt changed.

In 1945 the VVaG was cleared by order of the Soviet occupying forces. In 1950 he was revived; This was followed by the relocation of the registered office to Coburg and, on June 29, 1950, the entry in the Coburg Commercial Register under the name of Liability Assistance Fund of German motorists on mutuality in Coburg. At the general assembly on August 8, 1951, the church board member Willi Hussong and school councilor Heinrich Albsmeier were elected to the board alongside Paul Brendel .

In 1950 the company had its first headquarters in Coburg in a private apartment at Rodacher Strasse 42, where founding member Paul Brendel had moved. The next seat was spread over two floors in a building on Hinteren Kreuzgasse; In 1960, 155 employees were already working in a separate administration building on Heiligkreuzstrasse. In 1962, the company moved to the former Hotel Excelsior on Bahnhofsplatz in Coburg, which it acquired in 1964 and demolished in 1966. In the summer of 1970, the new head office was inaugurated on Bahnhofsplatz. Further construction phases followed in 1980, 1990 and 1996.

In 1966 business began in the new categories of household insurance , accident insurance and liability insurance . The subsidiary HUK-Coburg- Lebensversicherung was founded in 1968. In 1970 residential building insurance was taken up . In 1971, with the establishment of CORAG Coburger Rechtsschutzversicherung Aktiengesellschaft, legal protection insurance began operating.

With the founding of the HUK-Coburg-Allgemeine in 1977, the HUK-Coburg opened up to all private households beyond the public service. In 1979 the traffic service insurance division ( protection letter ) started operating ; In the same year, premium income exceeded the billion mark (in DM) for the first time.

In 1987 the company entered the private health insurance business with the establishment of HUK-Coburg-Krankenversicherung . In 1990 HUK-Coburg Internationale Service GmbH (now: HUK-Coburg-Assistance GmbH ) was founded; In the same year, the subsidiary CORAG was renamed HUK-Coburg-Rechtsschutzversicherung Aktiengesellschaft .

With the establishment of the HUK-Coburg-Bausparkasse in 1991, the HUK-Coburg entered a business field that was not part of the insurance for the first time; In addition, the offer was expanded to include the HUK-Coburg VISA card .

Due to the sustained high growth in the number of customers and employees, HUK-Coburg started building a new administration building in 1995 on Willi-Hussong-Strasse, located on Bertelsdorfer Höhe; the inauguration took place in 1998. With investments of 500 million DM, buildings for around 1900 employees were built on an area of ​​12.5 hectares in the first construction phase.

Logo of the HUK24

Logo of the insurer in the area of ​​the churches

The years 1999 to 2003 were marked by an expansion of the business spectrum and the addition of two new brands .

In 1999, the insurance company began selling vehicle insurance online. Due to the rapid development of direct and online business, the subsidiary HUK24 AG, which operates exclusively online, was founded on October 16, 2000 and continuously expanded. HUK24 does not have its own employees.

Between 2004 and 2006, a new computing and logistics center for around 425 employees was built on Bertelsdorfer Höhe with an investment volume of 80 million euros.

Since May 2007 there has been another subsidiary of HUK-Coburg: The IPZ - Institute for Pensions Management and Additional Supply GmbH, advises natural and legal persons as a specialist on company pension schemes and pension management. Target groups are the private sector as well as public and church institutions.

Together with Debeka Krankenversicherungs-Verein aG, HUK-Coburg Holding AG has been operating the newly founded Private Healthcare Assistance GmbH as a joint venture since the beginning of 2010 , in which the two insurance companies, each 50 percent involved, bundle their international emergency call service.

Due to the growing workforce, the building complex in Coburg's Willi-Hussong-Strasse was expanded in January 2015, which now offers 230 additional jobs. In 2016, another extension followed with a building block in modular construction, which was connected to this extension.

Also in 2016, the company introduced a telematics product for young drivers under the name “Smart Driver Program”.

The trade union ver.di criticizes the personnel policy of the HUK-Coburg, especially the way it deals with sick employees.

The company has almost 12 million customers with 38 million contracts and risks in its portfolio (as of 2017). The premium income amounts to around 7.4 billion euros (as of 2017). In 2010 the company rose to become the largest motor insurer in Germany based on the number of contracts.

In 2017 the company had 10,313 employees. With 5,736 employees in Coburg (as of 2017), the insurance is the city's largest employer. The employees are distributed over an administrative complex in the city center at the train station and a second larger one on Bertelsdorfer Höhe ( Coburg junction of the federal motorway 73 ).

With 275 trainees (as of 2017), HUK-Coburg is also the largest training company in the city.

The business activity focuses on the insurance needs of private customers. Measured by the number of units, the company is the largest motor vehicle and second largest private liability and household contents insurer in Germany . The latest line of business is company pension schemes. As a special insurer for the public sector, HUK-Coburg offers both civil servants and employees under collective agreements special tariffs.

The company offers the following types of insurance:

Consolidated subsidiaries of HUK-Coburg-Holding AG are the following corporations (unless otherwise noted, 100%):

The following partnerships are also included in the consolidation: