The Jewish community in Freudenberg in the Main-Tauber district in Baden-Württemberg , was founded in the Middle Ages and after an interruption again in the 16th and 17th. Century. It existed until the time of National Socialism . 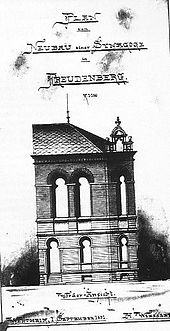 Drawing of the synagogue in Freudenberg, created in 1891 by Heinrich Wießler

The Torah scroll of the Freudenberg synagogue was found among the junk by a Freudenberg citizen in 1938 when the Nazis demolished the synagogue. He hides the gate roll in his barn, later in a remote corner of the town hall. It was found there by chance in 1978 by the headmaster at the time. On October 18, 1983, the Torah scroll was deposited in the holy cupboard of the house of prayer in Kedumim, Israel, about 50 kilometers north of Jerusalem. The Freudenberger Torah scroll is made of pure parchment, written on by hand with a quill pen. The leaves were sewn together with animal glue and animal vision. The writing value was around 20,000 DM, the ideal value is priceless.

On October 22, 1940, the last eight Jewish residents of Freudenberg were deported to the Gurs concentration camp .