Jakob Couven (* 13. October 1735 in Aachen ; † 9. October 1812 ) was a German builder of the rococo . As the third child of the baroque master builder Johann Josef Couven and his wife Maria Dorothea Gertrudis Mesters (1705–1788) from Maastricht , he continued his father's work in Aachen and the surrounding area and later set his own standards.

The Couven family originally came from the Clermont-sur-Berwinne area and Jakob's grandfather Johann Jakob Couven (1656–1740) appeared for the first time as a notary and court procurator for the Free Imperial City of Aachen. Jacob's father, Johann Joseph Couven, was the city council secretary and architect with numerous building contracts in Aachen and the surrounding area as well as in Eupen , Liège and the Netherlands.

After completing school, Jakob Couven began his apprenticeship in his father's construction office and was already entrusted with the survey work for the new road connection from Aachen to Lüttich (today's Lütticherstrasse) in front of the Jakobstor at the age of 15 . In the period that followed, his father involved him in almost all building projects, so that it is not always clear which building plan came from the father or the son. After Jacob's father had health problems at the end of the 1750s, from which he died in 1763, Jakob had taken on more and more responsibility for the ongoing construction work and was also officially employed by the city of Aachen from 1760 onwards. Couven took over this as "copyist" and appointed him in 1771 as council secretary, in 1782 as secondary secretary and from 1797 as chief secretary. In addition, from 1782 he held the office of secretary at the municipal tree court, which according to the regulations of 1747 had to judge debt claims of not less than 36 Aachen guilders .

Jakob Couven defended the views of the old party during the Aachen brokering and was arrested on December 12, 1789 on charges of misappropriating the Mehlakzise and only released on July 20, 1790 by order of the Reich Chamber of Commerce. Since 1792 he also worked as a wine merchant .

Despite his professional obligations, Couven continued to work, mostly part-time, as an architect and builder. Until the end of the 1770s, he primarily took on orders for conversions or smaller residential buildings, before he was commissioned by the city with the planning and construction of the New Redoute in the early 1780s . After the successful completion of this project, which was his only monumental building that is regarded as his main work, Couven received numerous other orders not only from Aachen, but also from the surrounding area and the neighboring Netherlands.

Jakob Couven lived with his younger sister Theresia (1741-1823) all his life in the house Litera A1097 (today corner of Holzgraben / Ursulinerstrasse) in the immediate vicinity of the historic Klüppel double house , which is why his house was called Am Klüppel . Couven himself died unmarried and remained childless.

In his early years, Jakob Couven seldom appeared as an independent builder and his work was largely limited to working closely with his father and master teacher. Thanks to this long-term collaboration with Johann Joseph in the same construction office, only about 10% of the traditional plans can be easily attributed to Jakob Couven and the vast majority of the known works can only be ascribed to him on the basis of stylistic criteria and the year in which they were created . Inside and outside views of Couven's works served repeatedly as motifs for the impressionistic painting style of the painter and draftsman August von Brandis, who worked in Aachen .

One of the first buildings, which, according to Buchkremer, may already have been designed by Jakob Couven himself, is the lease yard in the immediate vicinity of the St. Gerlach monastery in Houthem near Valkenburg aan de Geul from 1759, where his father had the plans for one of the props' wings drawn up. Jakob was certainly involved in the construction plans for the entire facility from the start and brought them to a close due to the father's declining health. After the death of his father in 1763, Couven created between 1765 and 1767 for the city villa, the later House Fey , of the Aachen merchant Andreas Ludwigs and his wife Constantia, née. Becker, a castle-like three-wing complex of the type of the French Hôtel particulier with a courtyard . He connected the two existing wing buildings with a central building and closed off the property on the street side (today Seilgraben) with a wall with an archway and two flanking pavilions. In the garden rising towards the Lousberg , he laid stairs and terraces and built a garden house at the end.

On the other hand, both the St. Jakobskirche, also built in 1767 for the monastery of the Order of the Holy Cross in Maaseik, and in 1774 the large building for the Premonstratensian monastery of St. Marien in Heinsberg and the apartment of the dean (1775), as well as other houses Only attributed in place based on the formal language and Couven's character. 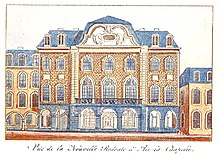 On the part of the city, Couven was initially only awarded smaller and subordinate orders, such as the planning for a new service chamber in the Aachen town hall (1767), for an extension of the “poor house Friesheim” on the Seilgraben, which was realized between 1771 and 1774, and for repairs at the Ponttor (1775). Finally, in 1782, he received the order from the city council to build the New Redoute as a supplement to the Old Redoute in Aachen in the spa center in Komphausbadstrasse. The architecture of the monumental building, completed in 1785, impressively documents Couven's transition from a baroque vocabulary of forms to the Louis-seize style.

With increasing awareness, he then took on numerous other construction contracts in Aachen and the surrounding area, such as contracts for the new building of the Beissel house at Jakobstraße 112, the new building of the Brussels am Markt corner at the corner of Pontstraße (1785), the renovation of the Monheim am Hühnermarkt (1786) or for the new building of the Eckenberg house in Burtscheid for the Pastor family there (1788). The number of smaller town houses designed by him was greater, such as the courtyard building Komphausbadstrasse No. 31 (1794), on the first floor of which stucco work by Petrus Nicolaas Gagini was installed, and the house "Zur Recreation" at Friedrich-Wilhelm-Platz No. 7 ( around 1800), which was inhabited by James Cockerill from 1820 and later served the recreation society. Outside Aachen, among other things, the reconstruction of Neuburg Castle in Gulpen-Wittem and the mausoleum for the family of the cloth manufacturer Johann Arnold von Clermont according to Couven's plans, while the new construction of the houses "Binterim" and "Under construction" in Vaals as well as the economic building the Rolduc is attributed.

In his last creative period from the turn of the 19th century, he designed, among other things, the plans for the house "Zum Kardinal" in Alexanderstraße No. 12 (1802) and for the house in Großkölnstraße No. 19. Now he preferred the one in Aachen known type of three-window house and now increasingly uses elements of the Empire style .

What many of these later town houses have in common is the dominant central projection with a striking tympanum and, on the first floor, often a contemporary bay window with a wrought-iron grille over one or three axes based on the model of the New Redoute. The tympanum was either decorated with the respective coats of arms of the owner family, guild coats of arms or with ornate ornaments. Just as typical for Couven are the lattice windows framed with a bluestone frame and, on some houses, a house plinth also made of bluestone, as well as the mansard roofs with the extended mansards .

For the interior fittings of several buildings, Couven liked to fall back on the skills of the plasterer Gagini and, like his father, he had the construction work carried out by the Klausener family from Burtscheid .